With an Abundance of Rookie Receivers, Which Ones Are Worth Drafting? 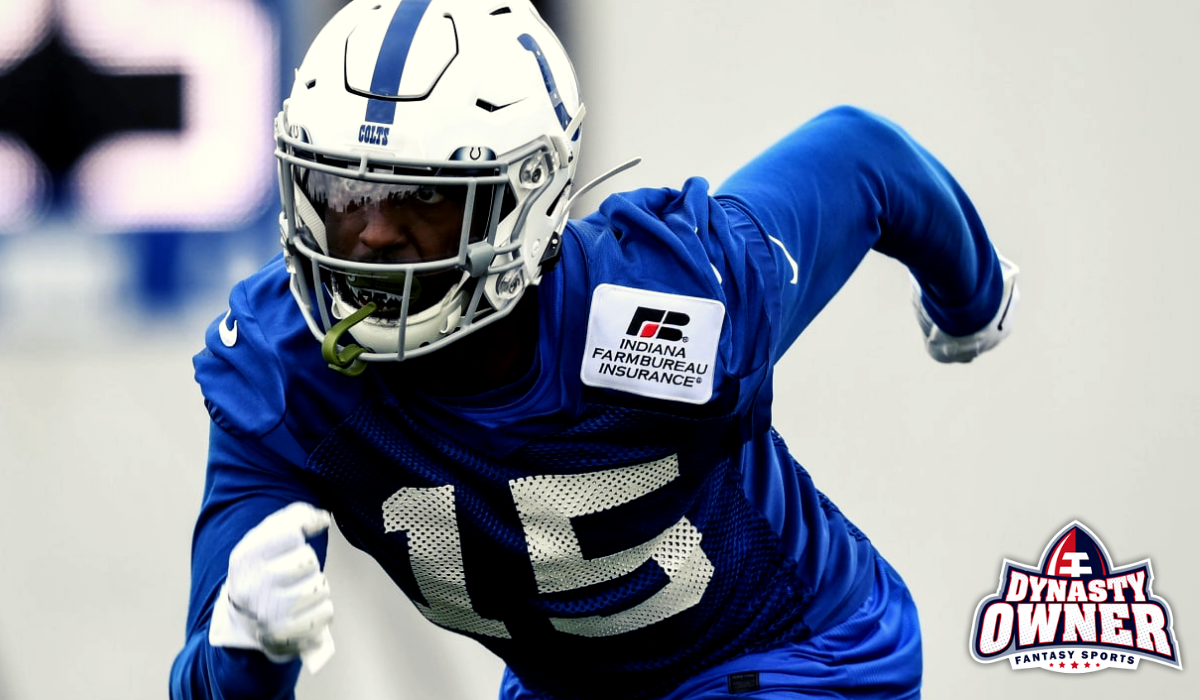 With an Abundance of Rookie Receivers, Which Ones Are Worth Drafting?

In contrast to the limited pool of potential impact rookie quarterbacks and running backs, there appears to be an abundance of rookies at the wide receiver and tight end positions worth drafting in Dynasty Owner. A total of nine WRs were drafted in the first two rounds of the 2019 NFL draft, but the first one wasn’t drafted until the 25th pick meaning that no rookie WR has a rookie contract with an annual salary of over $3 million. For Dynasty Owners, it means there’s plenty of value available at WR. The tough part is figuring out which rookie WRs are the best ones to draft.

There is a lack of high-end veteran TEs as we covered in our look at tight ends a couple of weeks ago. Therefore, the opportunity exists for two rookie TEs out of Iowa to be starters in Week 1. In addition, there are several other rookie TEs who might be worthy of drafting for your Dynasty Owner team.

All projected stats are based on the Standard Dynasty Owner scoring system as outlined in the updated Dynasty Owner Constitution. Standard Dynasty Owner scoring gives you .1 points for every yard rushing or receiving, .1 point for every 2 yards passing, 1 point per reception, 6 points for a rushing, receiving or passing touchdown and 2 points for a successful 2-point conversion (rushing, receiving, or passing). Interceptions or fumbles lost cost you 3 points, while a fumble that is recovered by the player’s team is a loss of only 1 point. Bonus points are available for 100-199 yards rushing (2 points), 200 yards rushing or receiving (6 points), 300-399 yards passing (1 point) and 400 yards passing (4 points). Kickoff and punt return touchdowns are worth 6 points for the player and kickoff and punt returns are worth .25 points for every 10 yards.

Will Any Rookie WRs Break Out from the Pack?

There were nine (yes, nine) wide receivers chosen in the first two rounds of the NFL draft with seven chosen in the second round alone. That’s a lot of rookies to look at, so in order to look at them as a Dynasty Owner should, the first thing we’ve done is break them down by 2019 projected cost per point.

Overall, the first thing we notice is that none of the rookie WRs are projected to be breakout candidates in 2019 or worthy of a high round draft pick. N’Keal Harry is projected to score the most points, but his 153 Dynasty Owner fantasy points still works out to less than ten points per game and 100 points less than a dozen veteran WRs.

Based on this chart, the best value pick of the rookie WRs is former UMass receiver Andy Isabella, the 8th rookie WR taken by the Arizona Cardinals with the 62nd overall pick in the draft, followed very closely by former Ohio State Buckeye receiver Parris Campbell who was drafted three picks ahead of Isabella with the 59th overall selection by the Indianapolis Colts. Both are projected to cost just under $9,000 per point in 2019. With the two of them so close, which one should you target in your Dynasty Owner draft?

For my Dynasty Dollars, it’s Campbell over Isabella. While Isabella is listed as the starter for the receiver-starved Cardinals (Larry Fitzgerald excluded), Campbell has a better situation with Andrew Luck throwing him passes. While it’s true that both T.Y. Hilton and Chester Rogers are ahead of him on the depth chart, the rest of the Colts receivers don’t inspire great confidence, so Campbell has a good chance of exceeding his 133 Dynasty Owner fantasy point projection for 2019 and contributing to the Colts offense for years to come.

The third player on our list, D.K. Metcalf, was one of the biggest surprises of the NFL Draft as he fell from an anticipated first round draft pick and potentially the first WR off the board to the ninth WR chosen as the last pick of the second round by the Seattle Seahawks. With a lot to prove and lots of catches to be had with the retirement of veteran Seahawks WR Doug Baldwin, Metcalf could be better than anticipated in 2019. If he does exceed his projected 112 Dynasty Owner fantasy points, he would end up as more valuable to his Dynasty Owners than either Isabella or Campbell.

Mecole Hardman is the wild card of the rookie WRs. His value depends greatly on the status of fellow Chiefs WR Tyreek Hill. Reports are circulating that Hill may only get a four-game suspension. If so, Hardman would be a lot less valuable than if Hill received a longer suspension as was being speculated earlier in the offseason. At $12,742 projected cost per point, right in the middle of the rookie WR pack, Dynasty Owners will have to proceed with caution and see what length suspension Commissioner Roger Goodell hands down for Hill before they can get a proper gauge of Hardman’s value to the Chiefs (and your Dynasty Owner team) this season.

Book-ending Hardman at #4 and #6 on the rookie WR value chart are two former SEC WRs, A.J. Brown and Deebo Samuel. While both are projected to score a similar number of points (119 for Samuel vs. 118 for Brown), Brown is projected to be more valuable on the basis of being drafted 15 picks after Samuel. However, Samuel is listed as the projected starter on the 49ers depth chart, while Brown is not projected to start for the Titans. Based on this and the fact that Samuel has a better QB throwing to him than Brown does, Samuel could very well be worth the extra $500,000 in salary this year and beyond.

First round picks N’Keal Harry and Marquise Brown sit almost at the bottom of the rookie WR list, even as both are projected to score more Dynasty Owner fantasy points than any of the other rookie WRs. Harry is projected to score more and as a result, he has more value ($16,501 cost per point vs. $21,668 for Brown). That could change once the G.O.A.T. Tom Brady retires and as Lamar Jackson improves as a passer, but for 2019, Harry definitely looks like the better option.

Finally, with a projection of only 52 Dynasty Owner fantasy points for $1.2 million, J.J. Arcega-Whiteside is probably best left to the Dynasty Owner free agent pool. There are better veteran options at roughly his salary (Tyler Boyd and Cooper Kupp immediately spring to mind) and there is even a higher salary option who will give you the same value on the Eagles roster (Nelson Agholor).

Which Former Hawkeye Tight End Should You Draft First?

That’s the question that we need to answer at tight end – do you draft the number eight overall pick T.J. Hockenson of the Detroit Lions ahead of the twentieth overall pick Noah Fant of the Denver Broncos or vice versa? Both are likely going to be the starter in 2019 and have veteran QBs throwing them the ball, so it’s a toss-up in terms of projected Dynasty Owner production in 2019.

Since Fant was picked twelve positions later than Hockenson, his salary is over $1.8 million lower ($4.955 million for Hockenson vs. $3.15 million for Fant). And that makes Fant a lot more valuable in Dynasty Owner.

Both of them are prohibitively expensive at those cost per point values, especially when they are projected as being the twentieth and twenty-second best fantasy producers at TE in 2019. However, many of the names (Trey Burton, Jared Cook, Eric Ebron, Jimmy Graham, Greg Olson, Jordan Reed, Kyle Rudolph and Delanie Walker) ahead of Hockenson and Fant carry higher salaries and higher cost per point projections than the both of the rookies do. Suddenly, Hockenson and Fant are looking like better values and maybe worth picking higher than just their point projections would indicate.

Are There Any Other Valuable Rookie Tight Ends Out There?

What about Dynasty Owners who don’t want to pay $3 million to $5 million (or more) for their tight end, but aren’t lucky enough to draft George Kittle. Are there any values out there among the rookie TEs?

Based on projected points in 2019, the answer is: Not really. However, if we look beyond the projections, two groups of rookie TEs exist beyond Hockenson and Fant – rookies with a veteran QB who are stuck on the depth chart behind a high-priced veteran TE and rookies who might emerge as the starter on teams without a reliable, pass catching veteran TE. All of these players are projected to score far fewer Dynasty Owner fantasy points than Hockenson and Fant, but they also make half as much in salary (or less).

First, we have Minnesota Vikings rookie TE Irv Smith Jr. and Green Bay Packers rookie TE Jace Sternberger who sit behind Kyle Rudolph and Jimmy Graham respectively on the Vikings and Packers depth chart. Both are projected to score only a couple of points per game and to cost quite a lot on a cost per point basis (not as much as Hockenson, but Smith’s value is very close to Fant). When we look at both of them as a Dynasty Owner should, we see Sternberger is more valuable.

Not only is he nearly $500,000 more expensive annually than Sternberger, Smith’s value in 2019 and beyond took a big hit when the Vikings signed Rudolph to a contract extension through 2023. In contrast, Sternberger appears more likely to be the starter in the near future as Graham is older than Rudolph (32 vs. 29) and his contract expires two years earlier (2021 vs. 2023).

There are also three rookie TEs who are projected to score very few Dynasty Owner fantasy points in 2019, but might find their way into the lineup more as the season progresses since they don’t face a lot of competition from the other TEs on the roster. Just looking at their projected 2019 points and cost per point, none of them look worthy of having on your Dynasty Owner roster.

However, a quick question for everyone reading – Can you name any of the veteran TEs on the Houston, Jacksonville, or Oakland rosters without looking at the next page of this article?

We’re not exactly talking about the second coming of Kellen Winslow or Shannon Sharpe, are we? That’s why Oliver, Moreau, and Warring are worth looking at for a spot on your 2019 Dynasty Owner practice squad.

There are a lot of rookie receivers worth considering for your inaugural Dynasty Owner roster. The downside is that none of the WRs were high first round draft picks, so nobody appears to be a sure bet. The positive spin on that is these rookie WRs come with lower salaries since they were drafted either late in the first round or in the second round.

As far as TEs go, T.J. Hockenson and Noah Fant are worthy of drafting based on the fact that they are projected starters – although their first-round draft pick salaries make them much more expensive and less valuable than their fellow rookie wideouts. Beyond those two rookie TEs, there are several other rookies worth checking out and maybe drafting for your practice squad.

There are plenty of options out there for Dynasty Owners. We’ll find out in December which of the rookies drafted (or not drafted) in August were worth it. Hopefully, you take one who helps you win your Dynasty Owner league in 2019.