Your Luck Just Ran Out if You Drafted Andrew; What to Do to Replace Him in Dynasty Owner 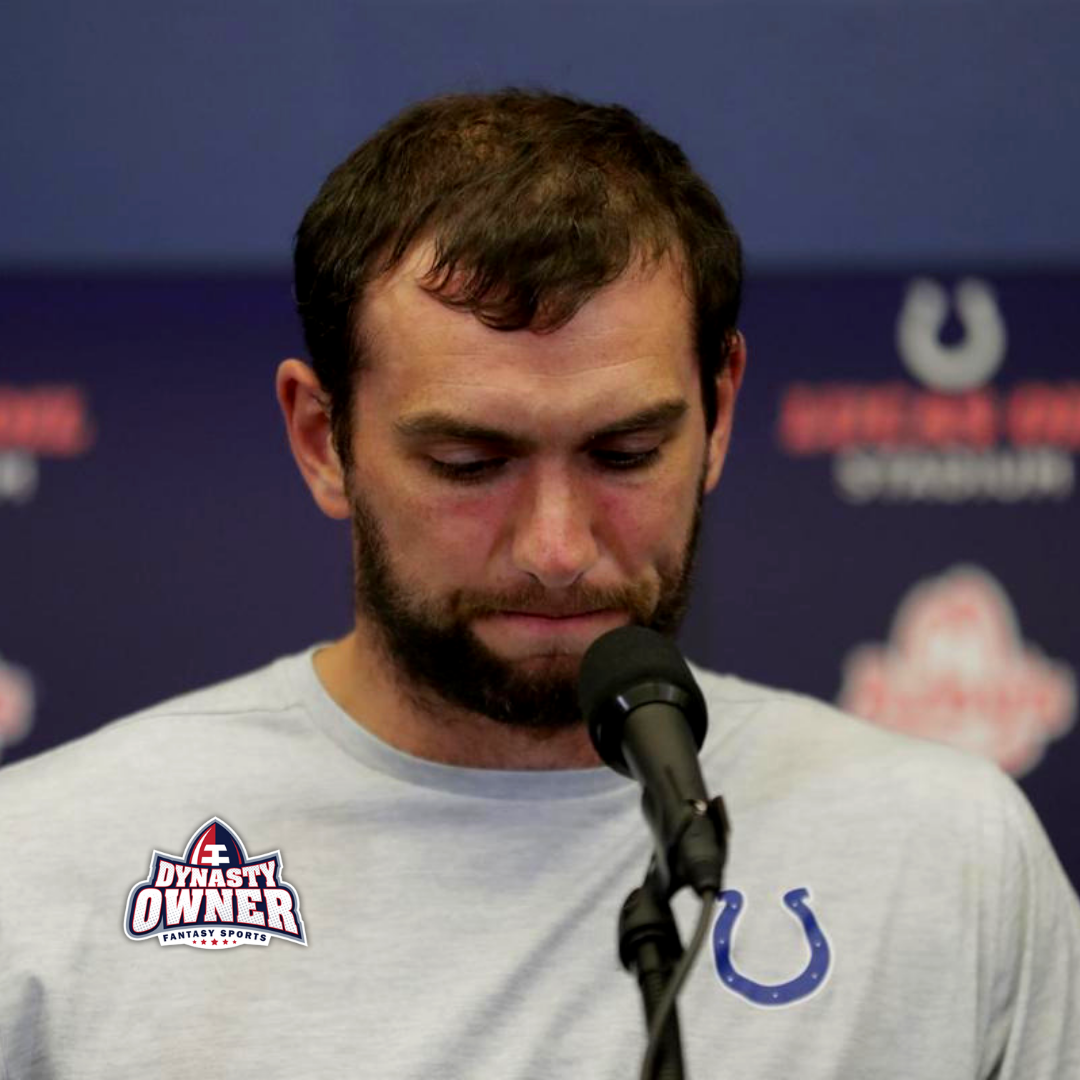 Your Luck Just Ran Out if You Drafted Andrew; What to Do to Replace Him in Dynasty Owner

Andrew Luck’s retirement from the NFL on Saturday night was a shock to almost everyone and especially to the owners who drafted him in millions of fantasy football leagues over the past couple of weeks, including one O.J. Simpson (https://twitter.com/TheRealOJ32/status/1165441329226276866). Luck missed all of the 2017 season with a torn labrum in his throwing shoulder, but returned for the 2018 season and led the Colts to a 10-6 record and a Wild Card playoff bid. In fantasy terms, Luck was the fourth best QB using the Standard Dynasty Owner scoring system in 2018 and projected to be the fourth best scoring Dynasty Owner QB in 2019.

However, Luck had been nursing a calf/ankle injury all through training camp and hadn’t played in the preseason this year. Before this most recent injury, he had dealt with a variety of additional injuries including a lacerated kidney in 2015, a concussion in 2016 and the previously mentioned torn labrum that kept him out all of the 2017 season. It has been as Luck put it in his retirement speech, a “four-year injury cycle”. And now, the injury cycle is over with his retirement.

So, what do you do if you’re like O.J. and drafted Andrew Luck? First of all, hopefully you’re not like O.J. in any way other than having drafted Andrew Luck in a fantasy league. And as far as we know O.J. isn’t in Dynasty Owner since he’s spending his time trying to find the real killers. However, Luck was drafted pretty high in most Dynasty Owner leagues with an Average Draft Position (ADP) of 55, the seventh best ADP among QBs, so there are a lot of you out there who need another QB. For those Dynasty Owners, we have some advice on how to move forward and make the best of the situation.

Interceptions or fumbles lost cost you 3 points, while a fumble that is recovered by the player’s team is a loss of only 1 point. Bonus points are available for 100-199 yards rushing (2 points), 200 yards rushing or receiving (6 points), 300-399 yards passing (1 point) and 400 yards passing (4 points). Kickoff and punt return touchdowns are worth 6 points for the player and kickoff and punt returns are worth .25 points for every 10 yards. Standard Dynasty Owner scoring for kickers gives you 1 point for every extra point, while a missed extra point will cost you 1 point. It’s 2 points for a field goal of between 0 and 39 yards, 4 points for a field goal between 40 and 49 yards and 5 points for a field goal of 50 yards or longer. A missed field goal of between 0 and 39 yards will cost you 3 points, while a miss of 40 yards or more is a loss of 2 points.

Jacoby Brissett to the Rescue!

Your first move should probably be to drop Luck and secure the services of Indianapolis’ new starting QB Jacoby Brissett if he’s still available. Brissett has an ADP of 126 in Dynasty Owner leagues – most likely because some Dynasty Owners have been drafting after Luck’s retirement announcement. There may also be some leagues in which savvy Dynasty Owners have already grabbed Brissett. If another owner in your league hasn’t gotten to Brissett yet, picking him up may be your best move. Indianapolis does have some good weapons at Brissett’s disposal in the Colts offense with Marlon Mack at RB, T.Y. Hilton and Parris Campbell at WR (I refuse to include Devin Funchess here based on his lacking performance for my fantasy teams in previous seasons) and Jack Doyle and Eric Ebron at TE.

Brissett also won’t cost you a lot of Dynasty Dollars as he is working on the last year of his rookie contract that counts for only $852,708 for Dynasty Owner purposes. And if you drop Luck by September 2nd, it won’t cost you anything as all Dynasty Owner transactions are free until then.

Bottom line, the quickest and easiest thing to do if you drafted Luck is drop him by September 2nd and pick up Brissett.

What if Brissett was taken by another Dynasty Owner? What do you do in that situation? With 10 owners per league and many owners drafting 3 QBs, there might not be many options out there unless other owners in your league went for prospects like Daniel Jones (ADP 121) or Drew Lock (ADP 147).

In looking at other options, Dynasty Owners will need to keep in mind their position relative to the salary cap. Aaron Rodgers may be available in your league, but he costs $33.5 million so you’ll need an extra $8.9 million in salary cap room to fit him on your team. It’s also likely that he’s not available in most leagues since his ADP is 106.

Based on ADP and salary, here are some of the most likely QBs available to replace Luck in your Dynasty Owner league, ranked by projected 2019 Dynasty Owner fantasy points scoring:

Russell Wilson is the most intriguing option here as he’s the closest to Luck in production at a slightly lower salary. Remember though, he signed an extension this off-season, so he’ll cost $35 million next year and beyond.

After Wilson, you’ll need at least $2.5 million in salary cap space for any of the next three best options (Cousins, Garoppolo and Stafford). Cousins and Stafford are apparently universally available in Dynasty Owner at press time.

If you have another starting QB on your roster, you could fill Luck’s roster spot by taking a backup fantasy QB such as Andy Dalton or Nick Foles and just suffer the projected decrease in production on your bench at a lower salary. Finally, there’s the wild card of Case Keenum who is likely to score more than 90 points in Dynasty Owner if he can hold on to the starting QB job in Washington.

Dynasty Owners who drafted early and took Andrew Luck to be their Dynasty Owner starting QB were stunned by his sudden retirement over the weekend and now have to scramble to secure a replacement before the NFL season kicks off. And unlike “regular” fantasy football leagues, you can’t just look at the waiver wire and pick the best available QB as you have to factor salaries in as a Dynasty Owner.

The first thing these Luck owners need to do is shed his $24.6 million salary before the end of August and avoid paying the 25% fee for dropping him during the season. Then, they can turn to their attention to figuring out who they can get to replace Luck.

The quickest and easiest option for those affected by Luck’s retirement is to pick up his replacement Jacoby Brissett if he’s available in your Dynasty Owner league. Since Brissett’s salary is only $852,708, he won’t take up much salary cap room and should provide his owners with good production since he has plenty of talented skill position players surrounding him. However, if another owner has already taken Brissett or you simply don’t want him on your team, there are other options out there.

Besides Russell Wilson due to his one-year only salary of $21.9 million, many of the most likely available options will cost you more than Luck’s $24.6 million salary. Others are less costly, but not projected to be as good as Luck so you’re potentially looking at decreased production at the prime position on your team.

What are you going to do Luck Dynasty Owners? It’ll be interesting to see for everyone as we get ready to start Dynasty Owner leagues in less than 10 days!