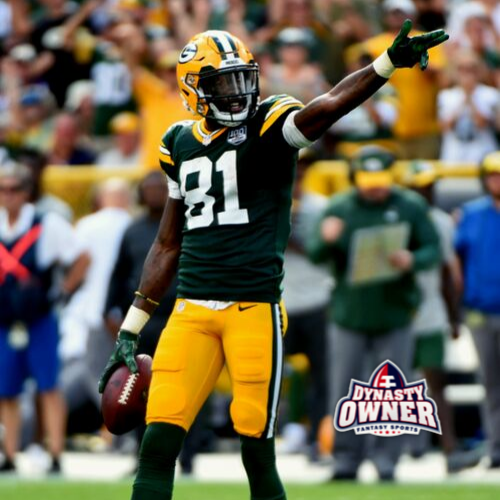 It’s Week 5 and we are well on our way into the of the first season of Dynasty Owner. Bye weeks are continuing with Kenny Golladay and Kerryon Johnson of the Detroit Lions as the biggest names on bye this week. If you’ve got one of them, hopefully you’ve got a solid replacement on the Bench or Practice Squad. The Miami Dolphins are also on bye, but I hope for your Dynasty Owner team’s sake that you haven’t been using any Dolphins players in either your Active lineup or on the Bench.

This is our fifth Dynasty Owner game preview article and in this one, we have a battle of undefeated brothers to analyze. We’ll also continue to pick some players who should be in your Active lineup and some who you should Bench, as well as review last week’s recommendations. In our look at our Dynasty Owner Match-up of the Week, we analyze each team’s starters and bench to see if any switches are needed, highlight other things of interest and importance, such as the creativity of the team names, and make a prediction on the winner and final score to find out which brother will reign supreme in the Battle of Undefeated Brothers.

First, let’s look at last week and see how my recommendations worked out (Good, Bad or Just Ok). I recommended having the following players Active in Week 4:

Two good and two bad recommendations for a .500 record last week. In all fairness, the Justin Jackson pick shouldn’t count against my record as I picked him before he strained his calf in practice on Thursday and he ended up being inactive. With that said, let’s see if I can do better with my recommendations of some players who should be Active in Week 5.

Jimmy Garoppolo (QB – SF): I could have taken Jacoby Brissett for the third consecutive week, but he’s currently the 7th rated QB in Dynasty Owner, so I need to look elsewhere. Why not choose another one of the G.O.A.T. Tom Brady’s former backups in Jimmy Garoppolo? Jimmy G has one good game (30.6 Dynasty Owner fantasy points in Week 2 versus Cincinnati) and two poor games (13.1 points in Week 1 versus Tampa Bay and 13.2 points in Week 3 versus Pittsburgh). Cleveland might still be without both of their starting cornerbacks this week and has let up 30 or more Dynasty Owner fantasy points twice already this season. Jimmy will make it three, so you’ll want him Active this week.

Jaylen Samuels (RB – PIT): Even if James Conner plays this week, I think Samuels should be Active for his Dynasty Owners. Samuels operated out of the Wildcat against the Bengals last week and had 23.9 Dynasty Owner fantasy points. The Ravens defense isn’t the usual Ravens defense as they gave up almost 200 yards rushing to Cleveland last week and let LeSean McCoy score two TDs (1 rushing and 1 receiving) the week before. Make Samuels Active this week.

Geronimo Allison (WR – GB): Green Bay is likely to be without the services of top WR Davante Adams in their Week 5 game against the Dallas Cowboys. This gives all of the other Packers’ WRs a chance to shine. Allison should move into the starting lineup and therefore, is the most likely to break out for a good game and be worthy of being Active. He had 14.9 Dynasty Owner fantasy points last week against the Eagles and he’ll put up at least that many points this week against another NFC East opponent.

Tyler Eifert (TE – CIN): I repeat what I wrote last week – Death, taxes and start your TE if they are playing Arizona. Those are the three guarantees in life in 2019. Even though Eifert hasn’t been setting the Dynasty Owner world on fire (25.1 points, good for 24th place among all TEs), I’m going with him since he’s playing Arizona. The Arizona defense has allowed an average of 23.1 Dynasty Owner fantasy points to TEs this season with the 17.7 points produced in Week 4 by Will Dissly, the least amount they have given up all season. Come on Tyler don’t let me down!

Two Good recommendations and a Just Ok one – acceptable, but not great. My Bad recommendation came on my second choice in Baker Mayfield, although my first choice (Carson Wentz) wouldn’t have been Good either. Two above average weeks in a row on the Bench selections is the start of a good trend. Here are some players who Dynasty Owners drafted to use in their Active lineup, but would be better if they sat on the Bench in Week 5.

Matt Ryan (QB – ATL): Tough week to pick a QB for the Bench as most of the top QBs have good matchups, so Matt Ryan is the pick since he’s going up against the Texans defense that held Carolina to 16 points last week and QB Kyle Allen to only 2.6 Dynasty Owner fantasy points. Admittedly, Ryan is much better than Allen, but the Houston defense has played well at home. Bench Ryan if you have a better option.

Josh Jacobs (RB – OAK): As the 21st rated RB in Dynasty Owner, he’s technically outside of being an automatic Active player in a 10-team Dynasty Owner league. However, since Kerryon Johnson is 20th and on bye this week, Jacobs is technically 20th best and should be Active. Don’t make that mistake. The Raiders are flying across the Atlantic to play the Bears in London this week. Jet lag plus a stout Bears defense that has allowed only 45 points and one rushing TD this season equals the Bench for Jacobs.

Sammy Watkins (WR – KC): Picking a Kansas City WR to Bench with Patrick Mahomes at QB seems like a foolish idea, but here goes. Since his 46.8 Dynasty Owner fantasy point performance in Week 1, Watkins has averaged just 8.9 Dynasty Owner fantasy points with a high of 10.9. Those are Bench numbers. Believe it or not, the Colts passing defense is pretty good and could hold Watkins and his fellow Kansas City WRs down this week, so Dynasty Owners should Bench Watkins this week.

Delanie Walker (TE – TEN): Walker had a poor Week 4 performance against Atlanta with just 0.4 Dynasty Owner fantasy points (1 reception, 4 yards, 1 fumble – not lost), even though the Titans passing game had over 200 yards and 3 TDs. This week, the matchup is even tougher with the Bills defense that held the G.O.A.T. Tom Brady to just 150 yards passing in Week 4. Walker is the 9th best TE in Dynasty Owner right now, but his owners should Bench him for a better option this week.

It’s time for our Dynasty Owner Match-up of the Week. This week is a very compelling match-up of two brothers, both with undefeated records putting up the most points in their league. Younger brother Tyler vs. older brother Alex, #1 vs. #2 in the league for family and Dynasty Owner bragging rights!

The exclusive Dynasty Owner scoring projections gives Tyler the victory over Alex by a margin of 131.7-122.6. I agree that Tyler is going to be the undefeated Williams brother at the end of Week 5, but the game will be closer than anticipated with Tyler’s QBs providing the margin of victory.

I wouldn’t celebrate yet if I’m Tyler since my prediction record is 1-3 so far this season. Check out the Week 5 Recap article to see if I improve to 2-3 or start the inaugural Dynasty Owner season with a 1-4 prediction record.