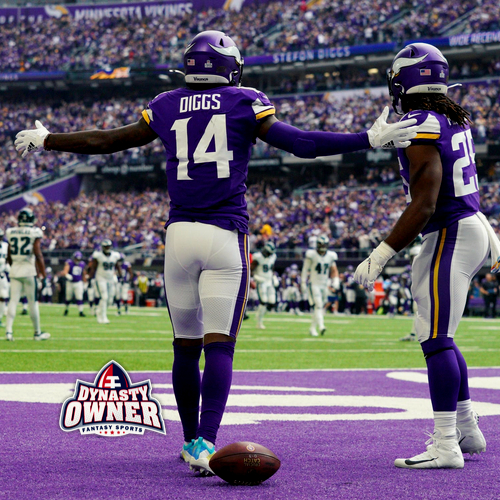 Week 6 of the Dynasty Owner season was definitely not as high scoring as Week 5 which led to some unlikely players winning Player of the Week and Value Player of the Week honors. It also caused our Match-up of the Week of undefeated teams to be much lower scoring than anticipated.

Our Dynasty Owner Player of the Week is: Stefon Diggs

Stefon Diggs is the Player of the Week as he was just one of two players with more than 40 Dynasty Owner fantasy points this week (Matt Ryan was the other one). However, because Diggs’ performance was one point higher than Ryan’s (43.5 for Diggs versus 42.5 for Ryan) and because he had only scored 41.3 Dynasty Owner fantasy points in the previous five weeks combined, the honor goes to Diggs. Diggs finished with 7 receptions for 167 yards plus 3 receiving TDs as well as 18 yards rushing. Diggs has a very high salary cap of just over $1 million per week – based on his $14.4 million salary (spread out over 14 weeks of the Dynasty Owner regular season), but his Dynasty Owners finally didn’t mind paying him that as he earned every penny this week.

Congratulations to Stefon on winning an unlikely first Dynasty Owner Player of the Week honor!

Facing lots of 8-man fronts due to having a third string QB in the lineup, Conner was an unlikely source of Dynasty Owner fantasy points this week. However, he delivered for his Dynasty Owners in only three quarters of action with 30.9 Dynasty Owner fantasy points (41 yards rushing, 7 receptions for 78 yards and 2 TDs – one rushing and one receiving). Conner’s annual salary of just $790,381 means that he cost his Dynasty Owners only $1,827 per point this week. While this is the highest cost per point for a Value Player of the Week, it was still good enough to win Conner the honor!

Congrats to James on your first Value Player of the Week honors!

Next, we look at those players who should have been in your Active lineups based on their performance in Week 6. We aren’t going to write that you should have started the top scoring RB in Dynasty Owner (Christian McCaffrey), since he should always be in your Active lineup (except next week when he’s on bye). Instead, these are players who might be Free Agents, on your Bench or Practice Squad, but likely weren’t Active in Week 6 when they should have been.

Honorable mention to Sam Darnold. Back from a bout with mono, Jets QB Sam Darnold was unlikely to be Active in a lot of Dynasty Owner lineups, but he should have been as he scored 27.0 Dynasty Owner fantasy points (338 yards passing, 2 passing TDs, 1 yard rushing, 1 INT).

RB: Jamaal Williams (GB) – 25.6 points
The Free Aaron Jones movement had its coming out party in Week 5 and was put back in its place in Week 6 with the 25.6 Dynasty Owner fantasy point (104 yards rushing, 4 receptions, 32 yards receiving, 1 receiving TD) performance by fellow Green Bay RB Jamaal Williams on Monday Night Football. After Jones’ Value Player of the Week honor, Dynasty Owners with Williams on their rosters were justified in having him on the Bench. Turns out they should have had him Active.

WR: Robby Anderson (NYJ) – 23.5 points
Anderson benefitted from having a real starting QB throwing him passes again this week with the return of Sam Darnold. After struggling and only scoring 24.1 Dynasty Owner fantasy points through his first four games, Anderson got his groove back with the return of Darnold and nearly doubled his fantasy output in Week 6. Anderson had 5 receptions for 125 yards and a TD for 23.5 Dynasty Owner fantasy points. He might be worth putting in your Active lineup from now on and definitely should have been in it this week.

After missing the past four games and coming into Week 6 with a questionable injury designation, Dynasty Owner can be forgiven for not having Henry in their Active lineup. For those who kept him on the Bench or Practice Squad, they missed out on a 30.0 Dynasty Owner fantasy point effort (8 receptions, 100 yards receiving, 2 receiving TDs). Get him into your Active lineup next week and hope for similar production.

Prater had 5 FGs and a one PAT, but was overshadowed by Packers kicker Mason Crosby who booted a 23-yard FG as time expired in the Packers 23-22 victory over the Lions. Prater had the PAT plus FGs of 22, 26, 41, 51 and 54 yards for a total of 19 Dynasty Owner fantasy points. After a couple of poor early performances, Prater has two weeks in a row (sandwiched around a bye week) with 10+ Dynasty Owner fantasy points and should be Active in your lineup if you have him.

The San Francisco defense had been playing well so far this season, but that probably didn’t deter a lot of Goff’s Dynasty Owners to bench him. That was the wrong decision as Goff had a total of only 78 yards passing and 2 fumbles – one lost to give his Dynasty Owner negative .1 points this week. It wasn’t for lack of trying or benching as Goff played the entire game and had 24 pass attempts. The 49ers defense just held the Rams offense in check and left Goff as the QB this week who his Dynasty Owners should have left on the Bench (or Practice Squad).

Dishonorable mention to Marcus Mariota who also had negative points (-2.4 points) but was likely in fewer Active lineups than Goff. Mariota’s lackluster 63 passing yards, 4 rushing yards and 2 INT performance led to his benching in favor of Ryan Tannehill who wasn’t a whole lot better (4.8 Dynasty Owner fantasy points). Mariota definitely was better off being on your Bench or Practice Squad this week.

The Denver Broncos defense bottled up the Tennessee Titans offense, allowing them only 204 yards from scrimmage in the Broncos’ 16-0 shutout of the Titans in Week 6. Henry had 16 touches, but only managed 33 yards from scrimmage (28 yards rushing and 5 yards receiving from 1 reception) to earn his 4.3 Dynasty Owner fantasy points. After five consecutive weeks of at least 10 Dynasty Owner fantasy points per week, his owners likely counted on a sixth week and had him Active when he should have been on the Bench.

It wasn’t only the Rams WRs who deserved a spot on the Bench. A week after being listed as someone who should have been Active, Everett falls into the Bench category this week with his 2.9 Dynasty Owner fantasy point (2 receptions, 9 yards receiving) performance. This isn’t surprising when you see that his QB only threw for 78 yards passing, but it definitely was unlikely when Dynasty Owners were setting their Week 6 lineups.

It’s not Greg the Leg’s fault that he should have been on your Dynasty Owner Bench this week. He had one PAT attempt and made it. Unfortunately, that was it for him as he had no FG attempts and finished with just the one Dynasty Owner fantasy point. While the 49ers defense was supposed to be good coming into this contest, most Dynasty Owner probably didn’t expect them to almost completely shut down the Rams offense and make Zuerlein irrelevant, so he was not worthy of the spot he likely occupied in your Active lineup.

In the battle of undefeated 5-0 teams, it was A Team Has No Name who prevailed over Brandon Dunn by nearly twenty points, 112.6-93.7. The low scoring affair saw Daniel Rivera’s team move to 6-0 with the victory. His total of 112.6 Dynasty Owner fantasy points was very close to his predicted score of 113.5, while Brandon Dunn’s team fell 30 points short of his predicted score of 123.9 and over 50 points shy of my prediction. The most unlikely part of this Match-up of the Week was that it was the lowest scoring match-up that we’ve analyzed. Even the battle of winless teams in Week 4 had more points scored than we got from two 5-0 teams this week.

The difference in tight end scoring really benefited Daniel as he got 25.7 Dynasty Owner fantasy points from Austin Hooper, while Brandon saw Will Dissly go down with an Achilles injury and score zero points. That was more than enough to give Daniel the victory.

A Team Has No Name also overcame its bye week and injury problems as they were able to win despite having two Bench players (Allen Robinson and Eric Ebron) on bye and two more Bench players (Mason Rudolph and Sterling Shepard) injured and not playing. Even with only three Bench players scoring points, Daniel only lost the battle of the benches by less than two points (11.3 to 9.6).

The Week 6 preview article was technically correct in predicting that the match-up could come down to Monday night (https://dynastyowner.com/post/week-6-preview). However, it was all but over at that point since Brandon only had a 93.7-88.8 lead with Daniel having two Active players (Aaron Jones and Mason Crosby) plus Matt Prater on his Bench remaining.

What was not correct, not even technically, was my Week 6 prediction. I had Brandon Dunn winning, so my record drops to 2-4 on this inaugural season of Dynasty Owner. Stay tuned and see if I can turn things around in Week 7.