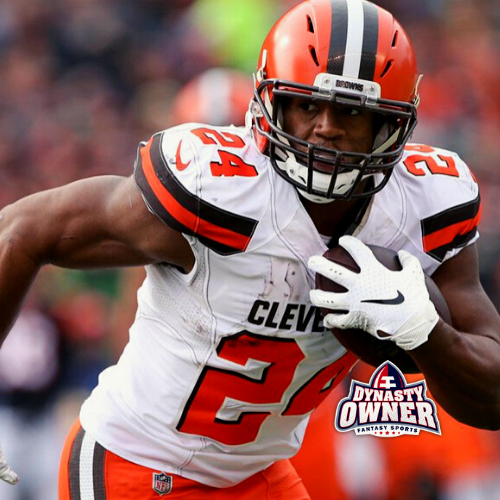 It’s Week 8 and time for a playoff push for many Dynasty Owners. With only seven weeks remaining in the regular season, Dynasty Owners are looking hard at their teams and trying to decide if they are in playoff contention or in rebuilding mode. Only Baltimore and Dallas are on bye this week, so many Dynasty Owner rosters are at full strength. That could be good for Dynasty Owners at the top of the standings who have their regular Active lineup and Bench at maximum power so they can continue to crush the competition. Or, it could mean those teams at the bottom of the standings don’t have to worry about missing players, so they have enough firepower to pull off an upset this week and stay in playoff contention.

This is our eighth Dynasty Owner game preview article. At first look, we have a Dynasty Owner Match-up of the Week that looks like it could be a mismatch, but might really be an upset in the making. To see which it is, we will analyze each team’s starters and bench to see if any switches are needed, highlight other things of interest and importance and make a prediction on the winner and final score. We’ll also pick some players who should be in your Active lineup and some who you should Bench, as well as review last week’s recommendations.

First, let’s look at last week and see how my recommendations worked out (Good, Bad or Just Ok). Because they were playing the Redskins and Dolphins, I recommended having the following 49ers and Bills players Active in Week 7:

Even though all of the players I chose were playing two of the worst defenses in the NFL, I still managed to miss on three out of four recommendations. Thanks to John Brown for bailing me out! Crummy field conditions due to a steady day-long rain in the Washington, DC region didn’t help Garoppolo and Coleman, but that’s no excuse. I’ll have to do better with my recommendations of players who should be Active in Week 8.

Teddy Bridgewater (QB – NO): Bridgewater is a one-week Active stop-gap at QB if you own him as Drew Brees is expected back soon. For the 28% of Dynasty Owners who have him on their rosters, he’s someone you can make Active and feel good that he’s going to perform well. Bridgewater has thrown for more than 200 yards in each of his last three games and has avoided turnovers since he replaced Brees with only three (2 INTs, 1 fumble). This week, he gets to play the terrible Arizona defense that is allowing an average of 285.6 yards passing per game, including 356 yards passing and 4 TDs to Matt Ryan two weeks ago (42.5 Dynasty Owner fantasy points). Teddy gets it done in his last start for the Saints, so he should be Active.

Benny Snell Jr. (RB – PIT): Snell has only scored 12.9 Dynasty Owner fantasy points all season, but 9.9 of them came in Pittsburgh’s last game versus the Chargers. He is rostered in 39% of Dynasty Owner leagues so he’s pretty available if you need an RB this week and I doubt many of his Dynasty Owners plan on having him Active. They should as both James Conner and Jaylen Samuels are banged up and Pittsburgh is going up against the Dolphins defense on Monday night. That’s the same Dolphins defense that allowed 100 yards rushing to Cowboys backup RB Tony Pollard in Week 3 and over 100 yards rushing to every opponent except the Chargers. Pittsburgh figures to be up big at the end of this one and Snell could be the RB to carry the load in garbage time, so make him Active.

Corey Davis (WR – TEN): Davis broke out for his second 20 Dynasty Owner fantasy point outing last week, catching 6 passes for 80 yards and a touchdown from new Titans starting QB Ryan Tannehill. This week, Tannehill and Davis get to face the Buccaneers defense that has given up 20 or more points in every game this season. They have also allowed three WRs to catch over 100 yards in passes in a single game. Davis has the best chance to accomplish this feat for the Titans and that’s why he should be Active.

Jonnu Smith (TE – TEN): The Buccaneers defense is awful defending TEs this year, only Arizona is worse. Starting Titans TE Delanie Walker got injured last week against the Chargers, is questionable and didn’t practice on Wednesday so Smith has a good chance to play a lot of snaps this week. Last week, he had his best game of the season with 9.4 Dynasty Owner fantasy points (3 receptions for 64 yards) and he’s likely to do better this week. He’s also widely available if you need an Active TE to replace Mark Andrews or Jason Witten, since he’s only owned in 22% of Dynasty Owner leagues.

Perfection! Four recommendations and every single one of them was good. My Bench recommendations seem to be better than my Active ones so far this season. Kerryon Johnson got injured early in the game and Jared Cook was inactive (Full Disclosure: The article was written and submitted before that announcement), which helped, but I still nailed the Murray and McLaurin Bench recommendations. Here are some players who Dynasty Owners drafted to use or have been using in their Active lineup, but would be better if they sat on the Bench in Week 8.

Nick Chubb (RB – CLE): Dynasty Owners drafted Chubb as ADP 16 to make him Active every week. However, the Browns are playing the Patriots defense that has two shutouts already this season and not given up more than 14 points to any team. So, they are hard to score against. They held the best RB they have faced (Le’Veon Bell) to 35 yards rushing and 70 yards rushing in the two games he played against them. This is no knock on Chubb, it’s just that the Patriots defense is playing so well that Dynasty Owners should Bench anyone playing against them – even Chubb.

Courtland Sutton (WR – DEN): The trade of Emmanuel Sanders to the San Francisco 49ers should improve Sutton’s fantasy stats as he’s the likely beneficiary of additional targets that would have gone to Sanders. However, now Sutton is the clear #1 WR in Denver (and the 10th best WR in Dynasty Owner) and teams will be game planning to stop him. Indianapolis hasn’t done a great job defending some of the top WRs in the NFL this season, allowing more than 100 yards receiving to DeAndre Hopkins, Julio Jones and Keenan Allen. However, Joe Flacco isn’t Deshaun Watson, Matt Ryan or Philip Rivers. The Indianapolis defense did hold down the Raiders and Titans top QB-WR combo and the Broncos combo of Flacco and Sutton is more like those teams. Bench Sutton for better options this week.

Greg Olsen (TE – CAR): If you are a Dynasty Owner who is paying Olsen’s $8.55 million annual salary, then you are likely making him Active every week. Hopefully you have a good backup TE because Olsen should be on your Bench this week against the 49ers. The 49ers defense has allowed only one TE to reach the end zone this season and no TE has gotten more than 32 yards receiving against them. While Olsen is the 10th highest scoring TE in Dynasty Owner, he’s had four games (out of six) in which he’s scored less than 10 Dynasty Owner fantasy points. He’ll make it five out of seven, so you should leave him on the Bench.

It’s time for our Dynasty Owner Match-up of the Week. Once again, we’ll be looking at a match-up with an undefeated team (Mafia Power 83). In a twist compared to last week, Mafia Power 83’s opponent, the Miami Gladiators, sits below .500 with a 3-4 record. A mismatch, you might be thinking, but then a quick look at the rosters reveal that the Miami Gladiators have a solid Active lineup featuring Dalvin Cook, Julian Edelman and Cooper Kupp. The Gladiators have scored 871.4 Dynasty Owner fantasy points this season, while the undefeated Mafia Power 83 has scored only slightly more at 874.8. Suddenly, we have the possibility of an upset on our hands.

The exclusive Dynasty Owner scoring projections based on their current lineups has the Miami Gladiators pulling off the upset of the undefeated Mafia Power 83 by a razor-thin margin of 130.5-129.3. It’s close if you only examine their Active lineups as well (a 114.4-113.3 margin for the Miami Gladiators).

The closest Match-up of the Week came in Week 2 as Teddy MF’in Ruxpin prevailed over Papagiorgio by just 4.3 points, but records were made to be broken and I think this Match-up breaks that record. The Miami Gladiators pull an upset with a close victory and stop Mafia Power 83’s undefeated season.

My prediction record is still below .500 at 3-4 for the season, so Mafia Power 83 probably isn’t sweating too much. Check out the Week 8 Recap article next Tuesday to find out who won the Match-up of the Week.