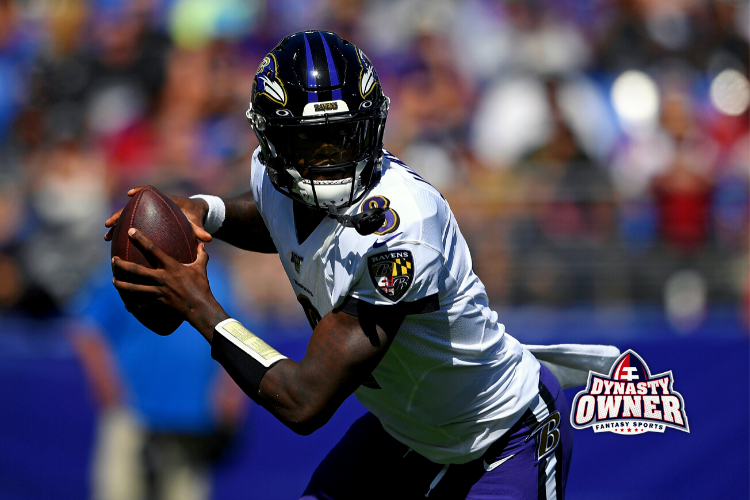 Week 12 was all about staying alive for the playoffs for many teams in the NFL (Browns and Steelers) as well as in Dynasty Owner. The Browns and Steelers both feasted on weaker teams to keep their playoff hopes alive. In the Match-up of the Week, The Replacements stayed alive in the Chase for the Ring and a berth in their league playoffs with a win over the Ballad of RickyBobby. Hopefully, all of you reading this article are still alive in your individual Dynasty Owner league playoff chase.

Our Dynasty Owner Player of the Week is: Lamar Jackson

Congratulations Lamar on winning your first, but definitely not your last, Dynasty Owner Player of the Week honor!

Congratulations Chris on your second and likely not your last Dynasty Owner Value Player of the Week honor!

Tannehill is still not rostered in a majority (54%) of Dynasty Owner leagues despite five consecutive games as a starting QB with at least 2 TDs and 24+ Dynasty Owner fantasy points. This week was his best as he scored 38.0 Dynasty Owner fantasy points (259 yards passing, 40 yards rushing, 2 passing TDs, 2 rushing TDs, 1 fumble – lost) in the Titans 42-20 victory over the Jaguars. With a low $2 million annual salary and playing for a team still alive for an AFC South division title, Tannehill might be someone for Dynasty Owners in need of a QB for the stretch run and playoffs to look at adding to their team. And if he’s already on your roster, hopefully you had him Active this week.

That’s two consecutive 100 yard performances for Williams after he ran for 104 yards back on Thursday night for the Colts against the Texans. The victory kept the Colts alive for the AFC South title. Williams helped with that and got 23.1 Dynasty Owner fantasy points (104 yards rushing, 3 receptions, 17 yards receiving, 1 rushing TD) for the few Dynasty Owners who have him rostered (only 8,7% of leagues). Hopefully, those Owners made him Active for the game since it was on Thursday night and he was only named the starter hours beforehand.

Brown was the top Tennessee receiver this week with 23.5 Dynasty Owner fantasy points (4 receptions, 135 yards receiving, 1 receiving TD) and a Top 10 overall WR as well. Many Dynasty Owners thought he was poised for a breakdown season, as evidenced by his ADP 112 and 100% ownership rate. However, he’s been disappointing for most of the year and still only stands as the 40th best WR in Dynasty Owner after his Week 12 performance. Brown has been scoring more points since Ryan Tannehill took over as the Titans starting QB and should have been Active this week.

Smith was not in any Dynasty Owner lineups this week as he is not rostered by a single Dynasty Owner yet. The rookie TE started for the New York Giants this week with starting TE Evan Engram and his backup Rhett Ellison both out with injuries. He had only caught one pass for one yard prior, but produced 12.7 Dynasty Owner fantasy points (5 receptions, 17 receiving yards, 1 receiving TD). That was the 4th best performance by a TE this week, behind likely Active TEs Zach Ertz, George Kittle and Jared Cook. For this week, Smith should have been rostered and Active.

Ryan was facing a great match-up against the poor Tampa Bay defense in Week 12 and the Falcons had played well in their past two games, likely prompting many of his Dynasty Owners to make him Active. That was the wrong move as he only scored 7.4 Dynasty Owner fantasy points (271 yards passing, 8 yards rushing, 1 INT, 2 fumbles – 1 lost) in the Falcons 35-22 loss. Instead, Ryan turned in his worst performance since getting injured in a Week 7 loss to the Rams (1.2 Dynasty Owner fantasy points) and should have been on your Bench.

Dishonorable mention to Cowboys QB Dak Prescott. Tough match-up against the Patriots and bad weather contributed to the worst game of the season for the #3 overall QB in Dynasty Owner. Prescott only got his Owners 8.0 Dynasty Owner fantasy points (212 yards passing, 4 yards rushing, 1 INT) in Week 12 and should have been on the Bench.

Benching Cooper this week turned out to be the right call, as I predicted in my Week 12 Preview article (https://dynastyowner.com/2019/11/week-12-preview-playoff-push). The match-up against Patriots CB Stephon Gilmore was a tough one and the game was played in poor conditions that didn’t help either team’s passing game. Both of those factors contributed to Cooper putting up the dreaded Blutarsky (0.0 Dynasty Owner fantasy points). Putting Cooper on the Bench or Practice Squad was a tough call, but it was the right one this week for his Dynasty Owners.

In a weak week for TEs combined with a match-up against the Bengals, some fantasy analysts were recommending McDonald as a good TE this week. They were wrong as McDonald continued to disappoint, scoring only 1.1 Dynasty Owner fantasy points (1 reception for 1 yard). He was a very high Dynasty Owner draft pick (ADP 130) despite a $6.55 million annual salary and has disappointed his Owners almost all year with single-digit scoring in all but two games. This was another week that McDonald should have been on the Bench.

It’s not Crosby’s fault that he scored a Blutarsky (0.0 Dynasty Owner fantasy points) this week. He didn’t have any FG or PAT chances as Green Bay went for the 2-point conversion after their only TD. Even after the zero, Crosby is still the #13 kicker in Dynasty Owner and rostered in 78% of league, so he may have been Active for some of his Dynasty Owners. They should have left him on the Bench.

The Replacements also moved up one spot in the Chase for the Ring standings to 8th place.

The Replacements could be higher in the Chase for the Ring standings if they had fielded a better lineup this week. Dustin kept two recommended Bench players (Josh Jacobs and Amari Cooper) in his Active lineup and it cost him quite a few Dynasty Owner fantasy points. A switch from Jacobs and Cooper to Mark Ingram and Will Fuller would have yielded The Replacements 34.5 more Dynasty Owner fantasy points and moved them up to 5th place in the Chase for the Ring.

Bill took my advice to find another TE, but he ended up adding Jonnu Smith of Tennessee who only scored 0.4 Dynasty Owner fantasy points (4 yards rushing). Smith did outscore Hayden Hurst who had a Blutarsky, but not O.J. Howard who produced 2.0 Dynasty Owner fantasy points (1 reception for 10 yards) on Bill’s Bench. It didn’t matter much though since Ballad of RickyBobby lost by 64.2 points.