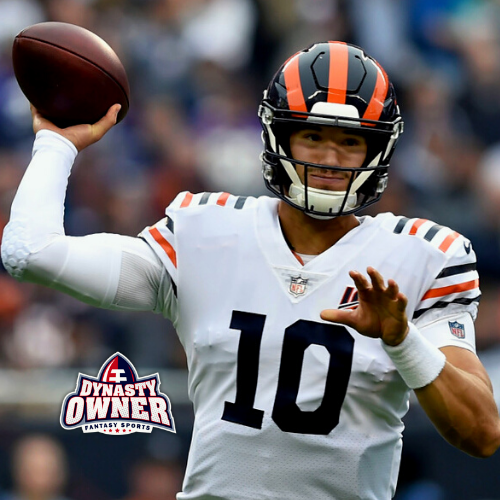 Happy Thanksgiving to all of my fellow Dynasty Owners! I know we are all thankful to be playing Dynasty Owner. Special thanks to the O.G. Dynasty Owner Paul for creating and developing the game. Thanks to Tim for keeping the game going, communicating with the developers and being super responsive to requests and comments. And thanks to Don for his help posting these articles on the blog and Twitter. I’m thankful for the opportunity to work for Dynasty Owner and with all three of them.

In our Match-up of the Week, we have a team (Up Country Degens) who are thankful that they are guaranteed a spot in their league’s playoffs and a chance to continue on in the Chase for the Ring. Alex’s Team won’t win the Ring, but they need a victory to remain in second place and possibly lock up a playoff berth.

This is our thirteenth Dynasty Owner game preview article. We will analyze each team’s starters and bench in the Match-up of the Week to see if any switches are needed, highlight other things of interest and importance and make a prediction on the winner and final score. We’ll also pick some players who should be in your Active lineup and some who you should Bench, as well as review last week’s recommendations. All stats are based on the Standard Dynasty Owner scoring system as outlined in the updated Dynasty Owner Constitution. Standard Dynasty Owner scoring gives you .1 points for every yard rushing or receiving, .1 point for every 2 yards passing, 1 point per reception, 6 points for a rushing, receiving or passing touchdown and 2 points for a successful 2-point conversion (rushing, receiving, or passing). Interceptions or fumbles lost cost you 3 points, while a fumble that is recovered by the player’s team is a loss of only 1 point. Bonus points are available for 100-199 yards rushing (2 points), 200 yards rushing or receiving (6 points), 300-399 yards passing (1 point) and 400 yards passing (4 points). There is also a 3 point bonus for clutch scoring, which is a score that results in a lead change in the final two minutes of the 4th quarter or overtime. Kickoff and punt return touchdowns are worth 6 points for the player and kickoff and punt returns are worth .25 points for every 10 yards. Standard Dynasty Owner scoring for kickers gives you 1 point for every extra point, while a missed extra point will cost you 1 point. It’s 2 points for a field goal of between 0 and 39 yards, 4 points for a field goal between 40 and 49 yards and 5 points for a field goal of 50 yards or longer. A missed field goal of between 0 and 39 yards will cost you 3 points, while a miss of 40 yards or more is a loss of 2 points.

First, we’ll look at last week and see how my recommendations worked out (Good, Bad or Just Ok). I recommended having the following players Active in Week 12:

Definitely not as good as last week and back to normal with two Just Ok and two Bad recommendations. Both Gage and Goedert were low end Active players in Week 12 as Gage finished as the #17 WR and Goedert was the #10 TE. However, there were other players who I could have been recommended that did better.  Let’s see if we can have a better set of recommendations of players who should be Active in Week 13.

Derrius Guice (RB – WAS): Carolina is allowing an average of 127 yards per game rushing and 19 rushing TDs on the season, nearly 2 rushing TDs per game. With Bill Callahan as Head Coach, the Redskins have said they want to emphasize the run. Guice split carries with Adrian Peterson the past three weeks, but since the Redskins aren’t making the playoffs, it’s time for them to see what Guice can do against the porous Carolina rushing defense. Make Guice Active this week.

Jack Doyle (TE – IND): The season-ending injury to fellow Colts TE Eric Ebron will give Doyle’s fantasy value a boost for the remainder of the season. Doyle is the #19 ranked TE in Dynasty Owner and Ebron is #15. In the Colts previous match-up versus Tennessee back in Week 2, they combined for 15.6 Dynasty Owner fantasy points (5 receptions, 46 yards receiving, 1 receiving TD). If you combined them for the season, they would be the #2 ranked TE with an average of 14.9 Dynasty Owner fantasy points per game. Doyle won’t be ranked that high for the rest of the season, but he should be a Top 10 TE this week and in future weeks, so get him in your Active lineup.

Now, let’s look at last week and see how my Bench recommendations worked out (Good, Bad or Just Ok) for Week 12 when I recommended having the following players on the Bench:

Best week of the season for Bench recommendations with all four being Good. Thanks to all four players for not playing well last week. Hope everyone who read the Week 12 preview heeded my advice and Benched all four of those guys. Let’s see if we can do it again! Here are some players who Dynasty Owners drafted to use or have been using in their Active lineup, but would be better if they sat on the Bench in Week 13.

Jameis Winston (QB – TB): Winston has thrown 20 INTs this season, 6 more than the next closest QB (Philip Rivers). He’s also fumbled 11 times and lost 4 of them. Despite all of the turnovers, he’s still #8 QB in Dynasty Owner because he’s thrown for over 300 yards in each of the last six games and averaged 24.5 Dynasty Owner fantasy points in the five games since the Buccaneers bye week. The Jacksonville defense hasn’t been great recently, but a lot of the fantasy points they have given up to QBs in the past couple of weeks have been on the ground. They are giving up 21.2 Dynasty Owner fantasy points per game passing the past three weeks with just one INT. That will change against Winston who might not have to pass as much as usual since Jacksonville is one of the worst defenses in the league against the run. Even if Tampa Bay doesn’t pass as much as usual, he’ll probably throw at least one INT, so Bench Winston this week.

Leonard Fournette (RB – JAX): Tampa Bay is second best rushing defense in the NFL, allowing only 78.7 yards per game on ground. Fournette averages 16.0 Dynasty Owner fantasy points per game at home in Jacksonville this season, below the 21.6 Dynasty Owner fantasy points he averages on the road or at neutral sites. The Buccaneers have held other top RBs to single digit points this season, including Derrick Henry, Saquon Barkley and Christian McCaffrey. They will do it again, so Bench Fournette this week.

Kenny Golladay (WR – DET): Regardless of whether it’s Jeff Driskel or undrafted rookie David Blough at QB on Thanksgiving, having Golladay in your Active lineup is not something Dynasty Owners want to do this week. While Driskel has been good at QB overall, Golladay has seen a decline in targets from 7.8 per game with Matthew Stafford at QB to 6.0 per game with Driskel. He had four 100+ yard receiving games in eight games with Stafford and none in three games with Driskel. And most importantly, Golladay is averaging 9.7 Dynasty Owner fantasy points per game with Driskel compared to 17.3 with Stafford. Driskel is still day-to-day, but the outlook is worse if Blough is at QB on Thanksgiving so keep Golladay on your Bench.

Darren Fells (TE – HOU): In each of the past three games, Fells has caught one pass. Fortunately for his Dynasty Owners, one of them was for a TD, but he’s still averaging only 4.4 Dynasty Owner fantasy points per game in that time frame. In the eight games prior, he averaged 9.7 Dynasty Owner fantasy points per game. Fellow Texans TE Jordan Akins has caught more passes in two of the past three games. Both of them get to face a New England defense that allows an average of only 3.8 receptions by TEs per game. That’s not a lot of receptions to go around for Fells and Akins, so leave Fells on the Bench this week.

Dynasty Owner Match-Up of the Week –

The exclusive Dynasty Owner scoring projections based on the current lineup for each team has Up Country Degens winning a high scoring game by a margin of 143.0-130.8. Both teams are at full strength with good players in their Active lineups and on the Bench, so a shoot-out is inevitable. I’m predicting a mild upset as both teams score lots of points, but Alex’s Team hangs on to win after going up big on Thanksgiving.

My prediction record is 7-5 for the season after a correct prediction in Week 12. Will Alex win to give me another victory and a three-game winning streak? Check out the Week 13 Recap article next week to find out who won the Match-up of the Week. Happy Thanksgiving!