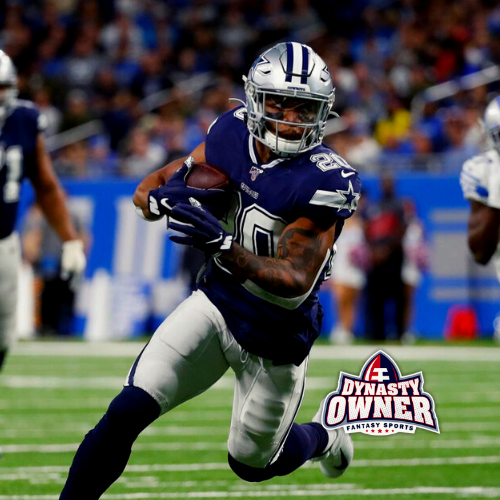 The Playoff Semi-Finals (aka Week 15) are all over now. We know which teams have qualified for their league Championship game and who will have the right to be called a Dynasty Owner League Champion. We also have a better idea of the teams realistically competing in the Chase for the Ring and the chance to call themselves the Best of the Best. Sadly, the Chase ended for a few teams including one of the teams in our Match-up of the Week.

Dynasty Owner Players of the Week

Our Dynasty Owner Players of the Week are: Jameis Winston and Lamar Jackson

For the second time this season, we have selected two Players of the Week. The two QBs honored this week put up a virtually identical number of Dynasty Owner fantasy points. As the top two scorers this week, they likely led many of their Dynasty Owner teams into the league Championship game. For the second straight week, Winston put up 48.3 Dynasty Owner fantasy points (458 yards passing, 4 yards rushing, 4 passing TDs, 1 INT) to claim his first Player of the Week honor. Even though salaries are not charged for the Dynasty Owner playoffs, Winston would have been a cost per point bargain at his regular season weekly salary (based on his $6.34 million annual salary).

Jackson was just behind Winston with 48.2 Dynasty Owner fantasy points (212 yards passing, 86 yards rushing, 5 passing TDs, 1 fumble) for his second Player of the Week honor. Jackson has been a bargain this entire season for his Dynasty Owners as the top scorer for only $2.37 million in annual salary.

Congratulations Jameis and Lamar on sharing the Dynasty Owner Player of the Week honor!

Drake was touted as a player to have in your Active lineup in the weekly preview article (https://dynastyowner.com/2019/12/playoff-semi-finals-preview) and did he ever deliver on that recommendation. Drake got almost all of the touches by Cardinals’ RBs in their victory over the Cleveland Browns and rewarded his team with 4 TDs and his Dynasty Owners with 41.6 Dynasty Owner fantasy points (137 yards rushing, 1 reception, 9 yards receiving, 4 rushing TDs). Hopefully, his Owners got him in their Active lineup and were rewarded with a berth in their league Championship game. At an annual salary of $845,315 during the regular season, Drake would have only cost his Dynasty Owners $1,451 per point if salaries were charged in the playoffs.

Tannehill provided just a slightly above average fantasy performance this week for his Dynasty Owners. That’s because he was averaging 28.4 Dynasty Owner fantasy points per start in his first seven starts of the season and “only” scored 30.0 Dynasty Owner fantasy points this week (279 yards passing, 10 yards rushing, 2 passing TDs, 1 rushing TD, 1 INT). Despite those gaudy stats, Tannehill was still not owned in 35% of Dynasty Owner leagues going into the playoffs. We don’t know for sure how many of his Owners had him Active this week, but unless his Owners also have Lamar Jackson, Jameis Winston or Drew Brees, he should have been Active for all of them.

Since Kenyan Drake was our Value Player of the Week, we need another RB for this spot. Miles Sanders and his 37.2 Dynasty Owner fantasy points would have been the choice, but he should have been Active as one of the only healthy options for a banged-up Eagles offense going against the Redskins. Therefore, the choice is someone who was likely not Active for any Dynasty Owners this week – Tony Pollard. The Cowboys back-up RB got to play a lot in the Cowboys blowout victory over the Rams and put up 24.3 Dynasty Owner fantasy points (131 yards rushing, 2 receptions, 12 yards receiving, 1 rushing TD). Unless you had the foresight to know the Cowboys would blow out the Rams and Pollard would get to play as much as he did (or thought Ezekiel Elliott would go down with an injury), then you probably didn’t make Pollard Active.

With Mike Evans out for the rest of the season, there were large shoes for the Tampa Bay WRs not named Chris Godwin to fill. Some people thought it might be Breshad Perriman who would fill Evans’ shoes, while others picked Justin Watson. Scotty Miller was also an option. However, it was Perriman who ended up stepping up the most with a total of 34.6 Dynasty Owner fantasy points (5 receptions, 113 yards receiving, 3 yards rushing, 3 receiving TDs). Perriman was available in all Dynasty Owner leagues for the playoff semi-finals, but after this performance and with the injury to Chris Godwin, a few Dynasty Owners might pick him up for their Championship game.

Smith had nearly an equal number of yards in the game against the Houston Texans running and catching the ball. That’s right, Smith had a 57-yard run on one carry as well as 60 yards receiving on 5 receptions for a total of 16.7 Dynasty Owner fantasy points. That was good for a Top 10 TE performance in the playoff semi-finals. Smith was owned in 54% of Dynasty Owner leagues, but with a ranking outside of the Top 20 among TEs, he likely wasn’t Active in too many playoff games this week.

Honorable mention to Ricky Seals-Jones. It’s no surprise that a TE playing against the Cardinals would have a big game. The surprise was that Cleveland TE David Njoku was declared inactive and Seals-Jones had the big game against his former team in Njoku’s place. Seals-Jones only caught 3 passes for 29 yards, but two of those receptions went for TDs (along with a lost fumble) for a total of 14.9 Dynasty Owner fantasy points. He was owned in only 26% of Dynasty Owner leagues, but even though the Browns were playing the Cardinals, it’s unlikely that he was Active in many leagues.

Hopkins was perfect on all five kicks in the Redskins 37-27 loss to the Eagles. He made 3 PATs and 2 fourth quarter FGs, a 43 yarder and a 53 yarder. Neither FG was clutch, so he didn’t earn the clutch scoring bonus. Not bad for a kicker who is now ranked #20 in Dynasty Owner and only owned in 11% of Dynasty Owner leagues. Based on those stats, it’s unlikely that he was in anybody’s Active lineup this week.

Dishonorable mention to Phillip Rivers who was the pick for Bench QB prior to Monday night. Rivers had four turnovers against the Vikings and only 10.4 Dynasty Owner fantasy points (307 yards passing, 1 passing TD, 3 INT, 1 fumble – lost). Rivers is owned in just over half (52%) of Dynasty Owner leagues and hopefully none of his Owners had him Active this week.

Dishonorable mention to Phillip Lindsay who is still inside the Top 20 RBs, but just barely at #19. Lindsay had his worst game of the season with only 3.2 Dynasty Owner fantasy points (32 yards rushing) in the snow in Kansas City. However, he hasn’t been producing much recently as he’s scored less than 10.0 Dynasty Owner fantasy points in four out of the past five games. That’s Bench production.

None of the big name WRs went out and gave their Dynasty Owners a Blutarsky (0.0 Dynasty Owner Fantasy Points) this week, but Edelman and Cooper didn’t do much better. Both of them had just 2.9 Dynasty Owner fantasy points in blowout victories this week. Cooper caught only one pass for 19 yards, while Edelman had two catches for 9 yards. A spot on the Bench was likely not where most of their Dynasty Owners placed these Top 10 WRs with a berth in their league finals on the line, but it’s where they should have been.

For the second time in three weeks, Henry had a disappointing outing. Back in Week 13 versus Denver, he only scored 3.0 Dynasty Owner fantasy points and he did worse this week with just 1.9 Dynasty Owner fantasy points (2 receptions, 29 yards, 1 fumble – lost). He’s only averaging 2 receptions and 26 yards receiving per game since the Chargers Week 12 bye. If not for a TD against Jacksonville in Week 14, it would be three straight Bench-worthy games for Henry. Despite these performances and missing four games due to injury, he’s still the #8 TE in Dynasty Owner.

Zuerlein made his only PAT attempt this week, but only one PAT attempt is definitely not what his Dynasty Owners expected from Greg the Leg and the Rams offense. While the Rams scored three TDs, they went for the 2-point conversion on the final two TDs. That’s two consecutive 1.0 Dynasty Owner fantasy point outings for Zuerlein who is also dealing with a muscle strain in his leg. Based on his season-long performance and reputation, Zuerlein was likely Active for a lot of his Dynasty Owners when he should have been on the Bench.

If there was a prediction playoffs, I’d be out as I had The Replacements winning. However, I was very close in my points prediction for them (145.8). There will be one more playoff prediction in the last Dynasty Owner preview article of the inaugural Dynasty Owner season later on this week. Congratulations to the Day Drinkers and everyone else who made it to the finals in their league!