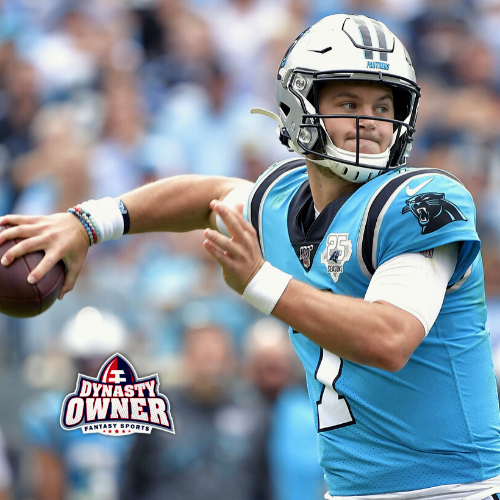 While the NFL season marches on for four more weeks, there’s only one week left in the Dynasty Owner regular season. One week left for Owners to solidify their spot in the Chase for the Ring, their playoff position or win their regular season finale and make it into the playoffs. For the winner of our Match-up of the Week, it’s one more week until the playoffs and an improvement in his standing in the Chase for the Ring, while the loser still has another week to play to clinch his spot in the playoffs.

Our Dynasty Owner Player of the Week is: Aaron Rodgers

Congratulations Aaron on winning your second Dynasty Owner Player of the Week honor!

Congratulations Kyle on your first Dynasty Owner Value Player of the Week honor!

Next, we look at those players who should have been in your Active lineups based on their performance in Week 13. We aren’t going to write that you should have started Lamar Jackson because while he had an average performance, he is still the #1 QB and top scorer in Dynasty Owner and should always be in your Active lineup. Instead, these are players who might be Free Agents or on your Bench or Practice Squad, but likely weren’t Active in Week 13 when they should have been.

After going without a TD pass for the entire month of November, Dynasty Owners with Goff on their roster can be forgiven for having him riding the Bench or sitting on the Practice Squad this past week. However, they missed an opportunity with terrible Arizona pass defense as the Rams’ opposition. Goff took advantage with a 37.2 Dynasty Owner fantasy point performance (424 yards passing, 2 passing TDs). Goff was the only QB to hit the 400 yards passing bonus of four points this week. While he is rostered in every Dynasty Owner league, he was likely not Active in many of them based on his November performance when he should have been.

Honorable mention to Dolphins QB Ryan Fitzpatrick who just fell short of Goff with 36.5 Dynasty Owner fantasy points (365 yards passing, 2 yards rushing, 3 passing TDs, 1 2-pt conversion, 1 INT) this week. If Fitzpatrick had just not thrown the INT, he would have been Player of the Week. Despite playing well since taking over as the Miami starting QB, he is still rostered in just 24% of Dynasty Owner leagues, so few Dynasty Owners could have had Fitzpatrick Active this week.

Guice scored 29.7 Dynasty Owner fantasy points on only 12 touches (129 yards rushing, 2 receptions, 8 yards receiving, 2 rushing TDs). He might have been Player of the Week if the Redskins hadn’t given 13 carries (for 99 yards rushing) to Adrian Peterson. Carolina came into the game allowing an average of 127 rushing yards per game rushing and the Redskins almost doubled it with 248 yards on the ground. Guice had only just over half of those yards for his first 100+ yard game along with the first two rushing TDs of his career. He should have been Active.

Expectations were likely low for Jeffrey in his return to the lineup after missing two games with an ankle injury. However, Jeffrey was playing against the lousy Miami pass defense and ended up scoring 28.7 Dynasty Owner fantasy points (9 receptions, 137 yards receiving, 1 receiving TD) for anyone who decided to make him Active. Jeffrey is rostered in 59% of Dynasty Owner leagues, but may not have been in the Active lineup in too many leagues even though he had the third most points among WRs in Week 13.

Prior to the match-up against the Arizona Cardinals, Higbee was averaging 4.8 Dynasty Owner fantasy points in a backup role to Gerald Everett. However, with Everett missing the Cardinals game, it wasn’t surprising that Higbee stepped up and gashed the Cardinals defense for 23.7 Dynasty Owner fantasy points (7 receptions, 107 yards receiving, 1 receiving TD). If you need a TE for this week, Higbee is currently only owned in 11% of Dynasty Owner leagues and plays the Seahawks who also don’t defend the opposition’s TE very well. As a bonus, he only has a $730,215 annual salary. Higbee should have been Active in Week 13 and might also be worthy of a spot in Active lineups in Week 14.

McManus had two FGs of over 50 yards in the Denver Broncos game against the Los Angeles Chargers, including a 53 yarder as time expired to lift the Broncos to a 23-20 win. In addition to that clutch FG, McManus also kicked FGs of 31 and 52 yards and added 2 PATs to score 17.0 Dynasty Owner fantasy points. Despite his current status as the #7 kicker in Dynasty Owner, McManus is only rostered in 13% of leagues so he wasn’t Active for too many Dynasty Owners.

As the #8 ranked QB in Dynasty Owners prior to last week, Jameis Winston was likely Active in a lot of Dynasty Owner leagues. However, don’t let the Winston owners say they weren’t warned not to have him Active this week (https://dynastyowner.com/2019/11/week-13-preview-giving-thanks). While he didn’t throw an INT as predicted, he did have a fumble and only produced 12.4 Dynasty Owner fantasy points (268 yards passing, 20 yards rushing, 1 fumble – lost), so he should have been on the Bench as recommended

Dishonorable mention to Jaguars QB Nick Foles who really deserves this spot after scoring -4.1 Dynasty Owner fantasy points (93 yards passing, 3 yards rushing, 1 INT, 2 fumbles – lost) this week. Since Foles is only rostered in 6.5% of leagues, not too many Dynasty Owners could have had him Active. The three turnovers led to Foles’ benching by Jacksonville for the second half of the game against Tampa Bay and the return of Gardner Minshew II.

Another week, another top WR rolling a Blutarsky (0.0 Dynasty Owner fantasy points) for his Dynasty Owners. This week, it was Tyler Lockett on Monday night with a performance to forget. Hope you didn’t need just 0.1 Dynasty Owner fantasy points from Lockett to win your match-up because then you lost. Even though Sammy Watkins also had a Blutarsky, he was likely not Active in as many lineups as Lockett. While Lockett is still the overall #13 WR in Dynasty Owner, that’s three bad weeks in a row for him and he should have been occupying a spot on your Bench.

Dishonorable mention to George Kittle who only had 3.4 Dynasty Owner fantasy points (2 receptions, 17 yards receiving, -3 yards rushing). Henry wasn’t the only top TE to put up a poor performance in Week 13 as Kittle barely outsourced him in the 49ers’ loss to Baltimore. Kittle is usually a no-brainer Active lineup player as the #6 ranked TE in Dynasty Owner despite missing two weeks due to injury. Unfortunately for his Owners, he had a bad week and should have been on the Bench.

Maher is rostered in 100% of Dynasty Owner leagues, likely due to his $525,000 annual salary and the fact that he plays for the Dallas Cowboys. Hopefully his Dynasty Owners didn’t have him Active this week as it would have cost them precious points. Maher had a day to forget with as he made his only PAT attempt but missed FGs of 35 and 47 yards for -4.0 Dynasty Owner fantasy points. Maher should have spent Thanksgiving on your Bench or, better yet, the Practice Squad.

Up Country Degens clinched first place in their league and moved up in the Chase for the Ring with a convincing 142.2-111.4 victory over Alex’s Team. The win improves the Up Country Degens’ record to 11-2 and moves them into 10th place in the Chase for the Ring, up five spots from last week., The loss drops Alex’s Team to 8-5 and 3rdplace in their league. Alex needs a win in Week 14 to guarantee his spot in the playoffs.

Alex’s Team ended up keeping his starting RBs as Todd Gurley and Ezekiel Elliott and leaving Derrick Henry and Le’Veon Bell on the Bench. Benching Bell was a good idea as he produced the fewest Dynasty Owner fantasy points of the bunch with just 10.7. Henry, on the other hand, had the most with 24.6 Dynasty Owner fantasy points. Hopefully next year, we’ll have a FLEX option and Alex can start three of his RBs every week.