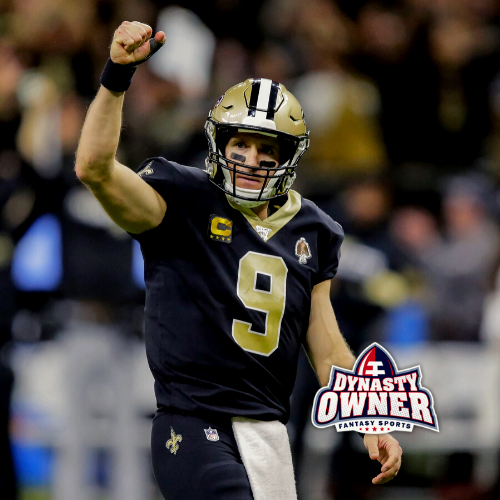 It’s Dynasty Owner playoff time! Four teams in each Dynasty Owner league qualified for the playoffs this year and will battle it out in Weeks 15 and 16. In many leagues, the playoff teams and places were pretty much set, while there was a lot riding on Week 14 in other leagues, such as League #53 that featured our three Match-ups of the Week. In the NFL, three teams (Chiefs, Ravens and 49ers) all won big games to join the Saints in clinching playoff berths.

Our Dynasty Owner Player of the Week is: Drew Brees

Drew Brees had a six TD game, including a clutch 18 yard TD pass with just 53 seconds left, against the San Francisco 49ers and his team still ended up losing the game. At least he can console himself with the fact that the Saints have already won the NFC South and clinched a playoff berth. Plus he won the Dynasty Owner Player of the Week honor for scoring 57.6 Dynasty Owner fantasy points (349 yards passing, 1 yard rushing, 5 passing TDs, 1 rushing TD). Brees’ point total was the fourth best point total in Dynasty Owner history, as he earned every penny of his $25 million annual salary this week.

Congratulations Drew on your first Dynasty Owner Player of the Week honor!

Congratulations Austin on winning the first and then the last regular season Dynasty Owner Value Player of the Week honor!

Next, we look at those players who should have been in your Active lineups based on their performance in Week 14. We aren’t going to write that you should have started Lamar Jackson, Christian McCaffrey, Michael Thomas or Travis Kelce because each is the #1 player in Dynasty Owner at their respective position and should always be in your Active lineup. Instead, these are players who might be Free Agents or on your Bench or Practice Squad, but likely weren’t Active in Week 14 when they should have been.

After this week’s 39.6 Dynasty Owner fantasy point performance (349 yards passing, 1 yard rushing, 4 passing TDs, 1 INT), we can probably take Garoppolo out of consideration for this honor as he’s moved up to be the #11 QB in Dynasty Owner. This was his third best performance of the season with the top two both coming against Arizona, so his Dynasty Owners may not have been comfortable having him Active until he proved he could put up big points against someone but the Cardinals. He’s only rostered in 22% of Dynasty Owner leagues, so he couldn’t have been Active for too many people regardless. Hopefully those of you with him on your roster made him Active this week.

Mostert has been the San Francisco RB to have for the past two weeks. He followed up his 25.4 Dynasty Owner fantasy point performance in Week 13 versus Baltimore with a 24.9 Dynasty Owner fantasy point performance (69 yards rushing, 2 receptions, 40 yards receiving, 1 rushing TD, 1 receiving TD) in Week 14. Still, those back-to-back performances have only moved him up to being rostered in 30% of Dynasty Owner leagues and the #35 ranked RB. As a result, he probably wasn’t in many Active lineups when he should have been.

Brown had his best week of the season in Week 14, scoring 33.6 Dynasty Owner fantasy points (13 yards rushing, 5 receptions, 153 yards receiving, 2 receiving TDs) against the Oakland Raiders. As just the #29 WR in Dynasty Owner after this week, he may not have been in a lot of Active lineups despite his 100% ownership and high draft position (ADP 112). It was the 13 rushing yards that allowed Brown to stay ahead of Darius Slayton for the honor of being the WR who should have been in your Active lineup.

Honorable mention to Darius Slayton of the New York Giants who had 32.4 Dynasty Owner fantasy points (5 receptions, 154 yards receiving, 2 receiving TDs) on Monday Night Football. All of Slayton’s points came in the first half alone and any Dynasty Owners with him in their Active lineup (or on the Bench) were probably disappointed that he didn’t add to his point total after halftime. Slayton is owned in just over half (52%) of Dynasty Owner leagues and is now ranked as the #27 WR in Dynasty Owner. Hopefully you thought he’d have a good game with the return of Eli Manning and had him Active, not on the Bench.

Fant was the second best TE in Dynasty Owner this week, finishing only behind Zach Ertz. He had his second 100-yard receiving performance of the season with 113 yards and scored 21.3 Dynasty Owner fantasy points (4 receptions, 113 yards receiving, 1 receiving TD) before leaving the Broncos game after having his foot stepped on. The Week 14 performance makes Fant the #15 ranked TE in Dynasty Owner, so he may not have been Active for too many of his Owners this week when he should have been.

Honorable mention to Tyler Higbee. Higbee put up another Top 10 TE performance this week against Seattle on Sunday night. He had 18.6 Dynasty Owner fantasy points (7 receptions, 116 yards receiving) in place of Gerald Everett and is still available in 70% of Dynasty Owner leagues. He did get to face two teams that defend TEs poorly (Arizona and Seattle), so it’ll be interesting to see if he has another 100 yard receiving game this week against Dallas.

Sanders has had himself quite an eventful past two weeks. First, in Week 13, he becomes the first kicker to catch a TD pass since 1977, then this week, he kicks 7 FGs, only one FG away from tying the NFL record of FGs in a game. The TD reception wasn’t enough to get him recognized here, but the FGs were. Sanders made 5 out of 6 FGs from 39 yards or less (22, 25, 28, 31, and 37 yards plus a miss from 34 yards out) plus a 47-yarder and a 53-yarder. The 37 yard FG was a clutch one with 1:33 left on the clock that earned him the extra 3 point clutch scoring bonus. Despite the eventful past two weeks, Sanders is still only rostered in 35% of leagues and as the #22 ranked kicker in Dynasty Owner, he probably wasn’t Active for too many Dynasty Owners.

A while ago, Russell Wilson was the #1 ranked player in Dynasty Owner. Now, he’s down to the #4 ranked QB and except for his Player of the Week winning Week 9 effort, he has been not worthy of being Active for several weeks. Week 14 was the worst of them as Wilson got his Dynasty Owners only 11.1 Dynasty Owner fantasy points (245 yards passing, 28 yards rushing, 1 INT, 1 fumble). Wilson used to be a reliable Active QB, but no more as he should have been on the Bench.

Yes, there were plenty of RBs who scored fewer than 5.3 Dynasty Owner fantasy points this week, but none were more surprising than Kamara only having that many points in a week in which the Saints scored 46 points and he touched the ball 17 times on offense. Kamara had 13 rushes for 25 yards and caught 4 passing for 18 yards, plus a lost fumble, to get his hard-earned 5.3 Dynasty Owner fantasy points. There were plenty of Saints who should have been Active last week, just not Kamara.

Hooper had a disappointing return from injury with only 5.2 Dynasty Owner fantasy points (2 receptions, 32 yards) in Week 14. In contrast, six of the top 10 TEs had more than 10.0 Dynasty Owner fantasy points, while Jason Witten had 8.7 points. The other two were out injured (Greg Olsen) or got injured during their Week 14 game (Mark Andrews), leaving Hooper as the TE who was probably Active, but should have been on the Bench.

Sobriety Is Boring finished the regular season strong and secured first place in League #53 with a convincing 156.6-110.2 victory over Kramerica Industrys, who finished the season in third place. The outcome means that there will not be a rematch in the League #53 semi-finals.

In our Week 14 preview article (https://dynastyowner.com/2019/12/week-14-preview-whos-making-the-playoffs), we made three lineup suggestions for Kramerica Industrys – replacing Josh Allen with Jared Goff and replacing Marvin Jones and Michael Gallup with Davante Parker and Robert Woods. Kramerica made two out of the three changes, but left Robert Woods and his 25.7 Dynasty Owner fantasy points on the Bench. In the end, it didn’t matter much as Sobriety Is Boring would have still won if Woods had been Active.

Fuego was guaranteed a spot in the playoffs no matter what, while Grbalj needed a win to secure his spot. In the end, Fuego won by a 144.5-94.6 score, but despite the loss, Grbalj scored enough points to still make the playoffs.

It didn’t end up coming down to Monday Night Football for Fuego as predicted. He was leading by a small margin (96.7-89.1) before padding his victory with scoring by Ertz, Saquon Barkley and Jake Elliott.

Ring My BELL did what he needed to do by defeating New Mexico Mountain by a score of 110.7-94.2 and ending up tied with Grbalj at 9-5. However, Ring My BELL didn’t score enough points as the points tiebreaker went to Grbalj. As a result, Ring My BELL ended up in fifth place in the standings and out of the League #53 playoffs.

Ring My BELL did leave significant points on the Bench by not having Ryan Tannehill Active as Tannehill outscored Ryan Fitzpatrick by a wide margin (37.4 Dynasty Owner fantasy points to 13.8). James White also outscored Benny Snell (13.3 to 1.1) and should have been Active for Ring My BELL. Those choices cost Ring My BELL 47.9 Dynasty Owner fantasy points – which would have made the tiebreaker to determine fourth place closer. However, even setting an optimal lineup and securing the Coaches’ Bonus would have left Ring My BELL 26.4 points short of what he needed to overtake Grbalj.

New Mexico Mountain also had lineup issues as he went with Taysom Hill over Drew Lock and left Adam Thielen in his Active lineup. Hill only ended up with 3.5 Dynasty Owner fantasy points, while Lock had 33.0 points. Choosing Hill over Lock ended up costing New Mexico Mountain the victory.

My prediction record ends up being 10-6 on the season as I finished on a high note and swept all three League #53 predictions, including close final score predictions in two out of the three Match-ups. It’s on to the Playoffs for the next preview article. Good luck in the Playoffs to Sobriety Is Boring, Fuego, Kramerica Industrys, Grbalj and all of the other Dynasty Owners who made it!