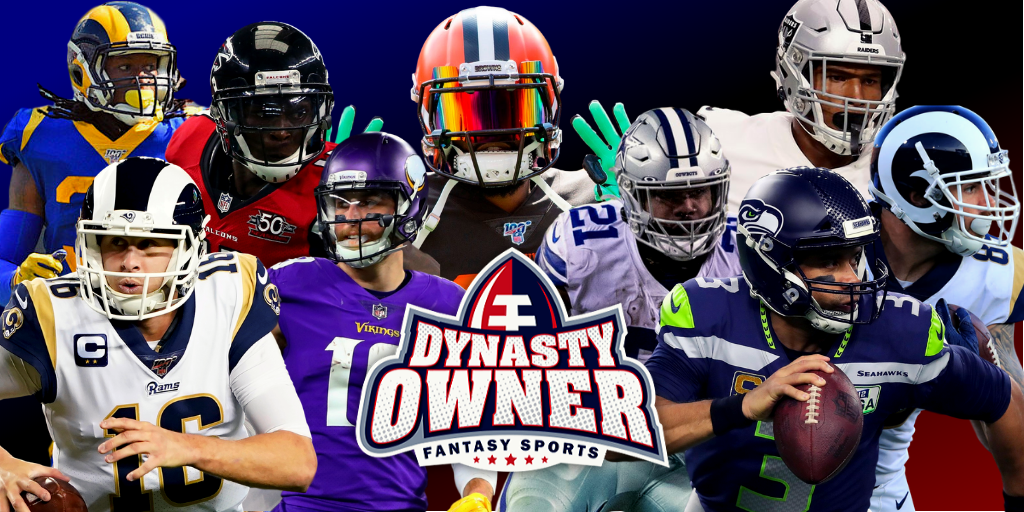 We are almost finished with the 2019 NFL season. The Super Bowl match-up is set with the Kansas City Chiefs facing off against the San Francisco 49ers. Hopefully Bruno, the Dynasty Owner contest winner, enjoys the game, has good seats and has a great time in Miami!

Here at Dynasty Owner, we’ve handed out awards for the best and worst of the 2019 season and now it’s time to start strategizing for the 2020 Dynasty Owner season. The podcast recently announced that the Dynasty Owner salary cap would be changed from the $120 million maximum with luxury taxes kicking in starting at $80 million in salaries to just a straight salary cap of $110 million. With the subsequent increase in roster spots from 24 to 30, there’s going to be more room for many Dynasty Owners to add players and salary, while others may have to trim some salary to fit under the new cap.

One thing that all Dynasty Owners will have to start paying attention to are players who got new contracts in 2019 that will be in effect for the 2020 season. Everyone probably remembers that back in April, Russell Wilson got a new contract that will make him the highest paid player in the NFL in 2020, unless someone else gets a new contract that pays them more. Carson Wentz also signed a new mega-deal in June, while a few players, like Tyreek Hill and Darren Waller signed new deals during the 2019 season that greatly increased their salaries for 2020 and beyond.

In this article, we’ll examine each position and give Dynasty Owners the details about the largest new contracts that individual players signed in 2019 and how much those contracts will cost Dynasty Owners in 2020 and future years. We won’t look at free agents, like Tom Brady, whose contracts expired at the end of the 2019 season as they likely aren’t getting signed until the 2020 NFL league year and free agency begins on March 18th.

All contract details and amounts are available on www.spotrac.com and details are in the selected news stories cited.

Welcome to the $30 Million Club

We have three QBs who will be joining Aaron Rodgers and Matt Ryan in the $30 million club in 2020 – Russell Wilson, Ben Roethlisberger and Carson Wentz.

The highest paid of the three QBs will be Russell Wilson at $35 million per year (4 year, $140 million contract). Wilson signed his new contract in mid-April (https://www.usatoday.com/story/sports/nfl/seahawks/2019/04/16/seahawks-russell-wilson-contract-extension-record-deal-seattle-aaron-rodgers/3481934002/) and will become the highest paid player in the NFL in 2020, ahead of Aaron Rodgers. This new contract replaces his $21.9 million contract that was in effect for the 2019 Dynasty Owner season and is a $13.1 million increase for his Dynasty Owners next year. Hopefully they all have enough salary cap room, or he’ll be on the waiver wire or trade block.

A few days after Wilson signed his huge contract, Ben Roethlisberger signed a two-year extension for $68 million, or $34 million per year. His new contract also vaulted him ahead of Rodgers for the 2020 Dynasty Owner season  (https://www.si.com/nfl/2019/04/24/ben-roethlisberger-pittsburgh-steelers-agree-contract-extension-free-agency) . Roethlisberger is only currently rostered in 35% of Dynasty Owner leagues, meaning that there aren’t a lot of Dynasty Owners who need to find salary cap room for this new deal.

In June, Carson Wentz became the newest member of the club when the Philadelphia Eagles signed him to a 4-year, $128 million extension that starts in the 2020 season (https://www.si.com/nfl/2019/06/06/carson-wentz-eagles-four-year-contract-extension).  His new salary of $32 million a year dwarfs his 2019 salary of $6.7 million for a Dynasty Owner record increase of $25.3 million a year. That’s a lot of extra salary for his Dynasty Owners!

Finally, some of you might recall that Jared Goff signed a 4-year, $134 million contract extension back in September before the start of the NFL season (https://www.latimes.com/sports/rams/story/2019-09-03/rams-sign-quarterback-jared-goff-to-contract-extension). His new contract doesn’t take effect until the 2021 season, so he won’t join the $30 million club this year. Therefore, his Dynasty Owners get to keep him on his rookie salary of just under $7 million ($6,984,418 to be exact) for the 2020 Dynasty Owner season.

There Will Be a New Highest Paid Running Back (in 2021)

There was only one RB to sign a large contract in 2019, Ezekiel Elliott of the Dallas Cowboys. The 6-year, $90 million extension that Elliott signed just before the start of the 2019 season will cost his Dynasty Owners an average of $15 million per year (http://www.nfl.com/news/story/0ap3000001047218/article/ezekiel-elliott-signs-sixyear-90m-contract-extension). This is the highest RB contract in Dynasty Owner, surpassing the $14.4 million a year being paid to Todd Gurley by the Los Angeles Rams. However, the good news for Elliott’s Dynasty Owners is that this was an extension that doesn’t kick in until 2021. Sure, you’ll be on the hook for $15 million per year until 2026 if you keep him on your roster, but at least you have his $6.24 million salary for the 2020 Dynasty Owner season.

Wide Receivers Are Getting Paid in 2020 and Beyond

The top paid WR in Dynasty Owner during the 2019 season was Odell Beckham Jr. at $18 million per year. Two players, Julio Jones and Michael Thomas, signed contracts that will make their average Dynasty Owner salary more than that amount with one starting at that salary in 2020, while the other player’s Dynasty Owner salary doesn’t increase until 2021. A third player, Tyreek Hill, signed a new deal that will put him in a salary tie with Beckham for the 2020 season. And they weren’t the only WRs to get new contracts in 2019, as several additional WRs signed new deals as well.

Julio Jones will be the highest paid WR in Dynasty Owner, but not until the 2021 season when his 3-year, $66 million extension finally goes into effect (https://thefalconswire.usatoday.com/2019/09/12/julio-jones-falcons-contract-details-extension/). His Dynasty Owners can keep him on their rosters for “only” $14.25 million in 2020. While he will be the highest paid WR in 2021, the salary increase will only be $7.75 million for the 3rd best WR in Dynasty Owner this past season.

The best WR in Dynasty Owner in 2019 will be getting paid starting in 2020. Michael Thomas becomes the second highest paid Dynasty Owner WR at $19.25 million per year after signing a widely reported $5 year, $100 million extension in July that is really worth $96.25 million before elite-performance escalators in the contract for the both 2022 and 2023 (https://www.espn.com/nfl/story/_/id/27293746/saints-wr-thomas-reach-100m-deal). Hopefully his Dynasty Owners, like our Ring Champion New York’s Strongest, have room for almost $18 million more in salary since he only cost them $1.28 million in 2019.

In October of 2019, Tyreek Hill signed a 3 year, $54 million extension that will cost his Dynasty Owners $18 million per year starting with the 2020 season (https://www.sportingnews.com/us/nfl/news/chiefs-tyreek-hill-contract-trouble/1225e1l38jbzi14enutho59j00). This is an increase of over $17.3 million – slightly less than the Michael Thomas increase – for those Dynasty Owners who only paid Hill’s $646,555 rookie salary in 2019.

Those were the biggest WR deals signed in 2019, but two additional players signed 4-year, $40+ million extensions that kick in for the 2020 season after costing their Dynasty Owners significantly less in 2019.

Vikings WR Adam Thielen also signed a new contract back in April, but his 4-year, $64 million is an extension to his current $4.8 million per year deal which expires after the 2020 season. Therefore, Dynasty Owners won’t have to pay $16 million, which is an additional $11.2 million per year, for his services until the 2021 season (https://www.twincities.com/2019/04/12/vikings-wr-adam-thielen-agrees-to-four-year-64-million-extension/).

Finally, we didn’t even touch on WRs who signed new contracts or extensions for 2020 that are for less than $10 million per year, such as Julian Edelman and Davante Parker. In a bit of good news for their Dynasty Owners, both contracts were only slight upgrades in salary that won’t break the bank ($2.625 million more for Parker and $2.25 million more for Edelman).

There Will Be a Few Newly Paid Tight Ends for 2020

There were three TEs who signed new contracts or extensions in 2019 with very different implications for their Dynasty Owners in 2020.

First, Kyle Rudolph got a 4-year, $36 million extension from the Vikings for 2020 (https://vikingswire.usatoday.com/2019/06/11/vikings-sign-te-kyle-rudolph-to-contract-extension/). However, this new deal is only a $1.7 million increase from the $7.3 million salary that the 26% of Dynasty Owners who had Rudolph on their rosters in 2019 paid him, so they should be able to keep Rudolph around if they want.

At the other end of the TE salary spectrum is Tyler Higbee. Higbee got a new 4-year, $31 million contract extension just a few days before the 2019 season started and will be paid $7.25 million by the Rams and his Dynasty Owners in 2020 (https://theramswire.usatoday.com/2019/09/05/nfl-rams-tyler-higbee-contract-extension-tight-end/). Higbee was only rostered in 43% with his $730,215 salary and now will cost almost ten times as much, or over $7 million, which might lower his ownership even more even after his stellar play to close the 2019 season.

Another TE who got a similar size increase in salary was Darren Waller. Waller was only on the books for the 2019 Dynasty Owner season for $675,000, similar to Higbee, but after playing well in 2019, he got signed in October to a new deal that will cost his Dynasty Owners $7.45 million per year starting in 2020. We will see if the $6.775 million increase in salary causes a decline in his ownership or forces some Dynasty Owners to trade him away.

More Years, but Only Slightly More Money for Justin Tucker

The only kicker who signed a significant new contract for 2020 was Justin Tucker of the Baltimore Ravens. Tucker’s Dynasty Owner salary isn’t going up too much, just $800,000 as his Dynasty Owners paid him $4.2 million in 2019. That will increase to $5 million in 2020 and beyond after he signed a new 4-year deal (https://profootballtalk.nbcsports.com/2019/04/24/justin-tucker-signs-four-year-extension-with-ravens/). If you were willing to pay $4.2 million for Tucker in 2019, then an extra $800,000 probably isn’t going to change his status with your Dynasty Owner team for 2020, unless you are over the new $110 million cap.

Either way, there are going to be more of these new contracts in the upcoming months and Dynasty Owners will have to pay attention to them and make changes to their teams accordingly. Just another reason why Dynasty Owner is different than any other fantasy football league out there and why you need to follow us for Dynasty Owner advice all year round.