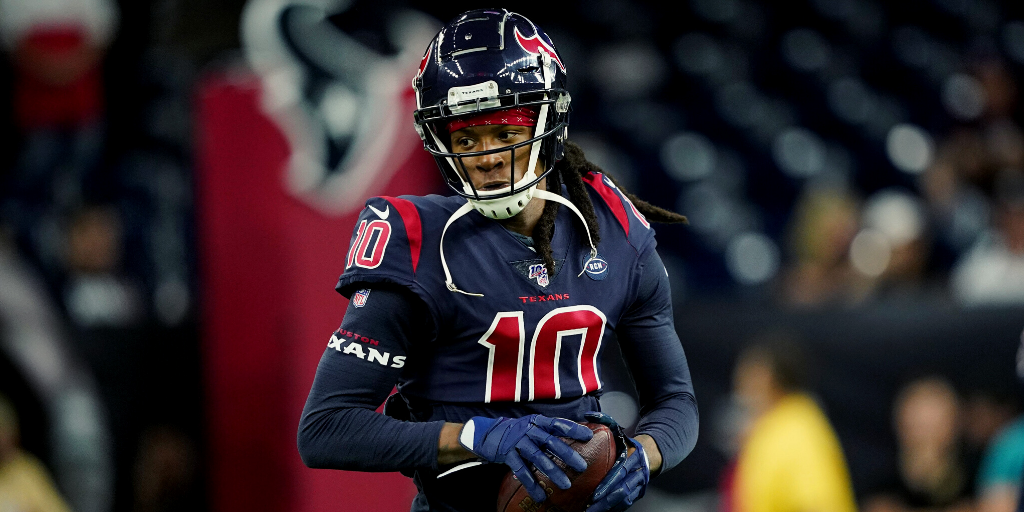 What a great movie! The 1983 comedy starring Dan Ackroyd and Eddie Murphy with Jamie Lee Curtis plus Ralph Bellamy and Don Ameche as the Duke brothers. I love that movie and personally own a Duke & Duke Commodities Brokers T-shirt and went on a tour of Philadelphia that highlighted the Duke brothers bank location.

I could go on and on, but this isn’t a movie review article. It’s a Dynasty Owner fantasy football article about recent trades in the NFL and their Dynasty Owner impact. There have been several trades since the start of NFL free agent signings last Wednesday and even before that as teams could start negotiating with free agents starting last Monday. While many of the players traded have been offensive linemen or on the defensive side of the ball, which doesn’t matter in Dynasty Owner, some players traded might be on your Dynasty Owner roster and others might still be available in your league’s Free Agent Auction.

Trades aren’t going to change the player’s contract details – for the most part, unless they sign a new deal with their new team. However, a trade can impact their usage and productivity and make an underutilized player in 2019 into a superstar in 2020 (David Johnson – your Dynasty Owners are looking at you) or vice versa.

Surprisingly, there are plenty of trades to cover. Does anyone else remember the days when NFL trades were rare and mostly players getting traded for draft picks, not other players? Trades like the “Great Trade Robbery” deal in which Dallas traded Herschel Walker to the Minnesota Vikings for eight draft picks that the Cowboys eventually turned into 5 players (Emmitt Smith, Russell Maryland, Darren Woodson, Kevin Smith and Clayton Holmes) who helped lead them to 3 Super Bowl victories in the 1990s. How shrewd of Jimmie Johnson to pull off that deal? And yes, I’m giving Jerry Jones zero credit – look what he’s done as Owner and General Manger since Jimmie and his players have left – Nothing! Now, it seems like there are trades every off-season and even some during the season, such as the Dolphins trading off several players in the middle of last season, including Kenyan Drake to the Arizona Cardinals.

No, not Kyle Allen to the Redskins or Nick Foles to the Bears. I’ll get to those deals later. I’m talking about the David Johnson-DeAndre Hopkins trade (plus draft picks) between the Arizona Cardinals and Houston Texans. The consensus is that the Texans gave up too much (Hopkins and a fourth-round pick in the 2020 NFL draft) to acquire Johnson (plus a 2020 second-round pick and 2021 fourth-round pick) from the Cardinals. Here is a sampling of headlines about how the Texans got fleeced:

For Hopkins owners, this appears to be a really good deal. In 2019, he was the #5 WR in Dynasty Owner for the entire season, even though he didn’t play in the season finale. This is after being the #1 Dynasty Owner WR in 2018. Based on current average salaries on Spotrac, Hopkins’ $16.2 million salary is tied for the eighth highest among WRs (https://www.spotrac.com/nfl/rankings/average/wide-receiver/).

Hopkins should be able to, at least, maintain the production he had with Deshaun Watson and Bill O’Brien in 2018 and 2019 with Kyler Murray and Kliff Kingsbury in 2020, so his Dynasty Owners definitely should hang on to him. Even better news for his Dynasty Owners is that they can keep him for 3 more years at that price (provided the Cardinals don’t rip up his deal and give him more money). Hopkins will be the clear top WR in Arizona and is an immediate upgrade over their top two WRs from 2019 (Larry Fitzgerald who was the #35 WR in Dynasty Owner and Christian Kirk who was ranked #37), also making QB Kyler Murray a better value in Dynasty Owner as well.

For Johnson owners, the outlook is improved from what was expected in Arizona, but questions remain on if he is worth his Dynasty Owner salary. Johnson will cost his Dynasty Owners $13 million in both 2020 and 2021. After the Rams released Todd Gurley, Johnson became the third highest paid RB in the NFL behind Ezekiel Elliott and Le’Veon Bell (https://www.spotrac.com/nfl/rankings/average/running-back/).

This is a tough call for Johnson’s Dynasty Owners. I’m holding him for now, but would be open for trade offers if I get any. If you don’t own Johnson in your Dynasty Owner league and think he’ll perform as well as he did in the first six games of 2019, then make an offer to the Johnson owner in your league and see what happens. If you think he’s more like the RB who was stuck behind Kenyan Drake at the end of last year or even just the #9 Dynasty Owner RB like he was in 2018, then dropping Johnson and saving $13 million in salary cap room is the way to go.

Receivers Getting Traded for Draft Picks

Will Diggs be able to improve in Buffalo with QB Josh Allen and his 58.8% completion percentage or will he continue to disappoint? Even though it’s free now until the end of the month, dropping Diggs isn’t really a good option for his Dynasty Owners (and nobody has done it yet as his ownership remains at 100%). He seems likely to compete with John Brown for catches in Buffalo, so I’m not completely sold on him returning to his 2018 performance level. My recommendation is trading him (if possible) to a Dynasty Owner who’s more optimistic about the deal.

Hayden Hurst goes from Baltimore to Atlanta to replace Austin Hooper as the Falcons TE.  He was traded (plus a fourth round draft pick) for a second and a fifth round pick. Speaking of trades, that’s probably what you’ll need to do to acquire Hurst in Dynasty Owner as he’s rostered in 83% of leagues right now. The late first round draft pick in 2018 was stuck behind Mark Andrews in Baltimore, but still managed to catch 30 passes for 349 yards and 2 receiving TDs (76.9 Dynasty Owner fantasy points) and finish the 2019 season as the #34 TE in Dynasty Owner. Now with Atlanta, he has the opportunity to be the top TE and could project as a top 10 Starting TE in 2020. His $2.76 million contract is very reasonable. Make an offer if you don’t own Hurst in Dynasty Owner and want him on your roster, then hope his current Dynasty Owner doesn’t value him as much as he should.

Quarterbacks on the Move

For everyone who was waiting for what to do about Nick Foles and Kyle Allen, this section is for you. Both were traded for roughly the same amount as Foles was shipped from Jacksonville to the Chicago Bears for a compensatory fourth round pick (140th overall selection), while Allen was dealt to Washington from Carolina for a fifth round selection (148th overall). Pretty similar trade return for players with very different salaries in Dynasty Owner.

Nick Foles becomes the favorite to be the starting QB in Chicago, but still has to beat out Mitchell Trubisky for the job. Foles was injured in the first game of the 2019 season and played only two full games after returning from injury (averaging a respectable 20.7 Dynasty Owner fantasy points in those games). However, he also played awful in his third start back with -4.1 Dynasty Owner fantasy points from three turnovers before being replaced by Gardner Minshew II for the rest of the season. His contract is pretty low for a veteran QB at $22 million per year (17th highest right now according to Spotrac, but he’ll be on your Dynasty Owner books for three more years at that figure. Unless Foles voids the contract after the 2020 season, which he can do now after restricting his contract after being traded. If you need to drop a higher priced QB like Aaron Rodgers to make some room, Foles is widely available. He’s only rostered in 9% of Dynasty Owner leagues. Grab him now, if you think he becomes the starter and plays well in Chicago as he could be your Dynasty Owner Bench QB or a flex Starter depending on matchups.

In contrast, former Carolina QB Kyle Allen is rostered in a majority (57%) of Dynasty Owner leagues after playing in 13 games last season. He’s reunited in Washington with Head Coach Ron Rivera, but seems likely to be the backup for the Redskins behind Dwayne Haskins. However, just because he’s the backup doesn’t mean you should drop him in Dynasty Owner. His one-year, very salary cap friendly contract (for either $585,000 or $675,000 depending on the source) means that he’s a great Practice Squad stash for your team in case Haskins gets injured or is ineffective. He was the #29 QB in Dynasty Owner last year, but did have two games of more than 30.0 Dynasty Owner fantasy points and three additional games of more than 20.0 points, so he was serviceable as a Starter or Bench QB in select games. Don’t drop Allen just yet if you own him and pick him up if available in your league as your third or fourth QB. With 30 man rosters now, Dynasty Owners should have an available roster spot for his miniscule salary.

Now that the new NFL league year has kicked in, free agents have started signing new contracts, some with new teams and some re-signing with their current team. Plus, trades are being made.  Trades generally aren’t going to change salary figures, but may cause Dynasty Owners to change their outlook on a player with only a week to go to get your Dynasty Owner roster up to at least 25 players, but not more than 30, and your team’s salaries under the $110 million salary cap.

Out of the players traded so far this off-season, DeAndre Hopkins and Hayden Hurst are the most likely to improve on their 2019 performances, but if you don’t own either one, you’ll probably have to give up something of value to get them from their current Dynasty Owner. Hurst is in the Free Agent Auction in a few leagues, but not many, while Hopkins is not. David Johnson is intriguing but a risky hold because of his $13 million salary, while Dynasty Owners should be looking to deal Stefon Diggs if they need the salary cap room. Neither traded QB is a lock to start, but Nick Foles might be the starter in Chicago. Kyle Allen is cheap to own and stash on your Practice Squad if he’s available as a Free Agent in your league.

There’s lots more contract news to cover as we haven’t yet talked about free agents who signed with new teams. That’ll be the focus of the next article to help Dynasty Owners with their decision-making before free drops end at the end of March. Besides these articles, don’t forget about all of the great Dynasty Owner specific podcasts, message board debates and Twitter posts. All of this great content is available to help you win your Dynasty Owner league and maybe become the winner of the 2020 Chase for the Ring!