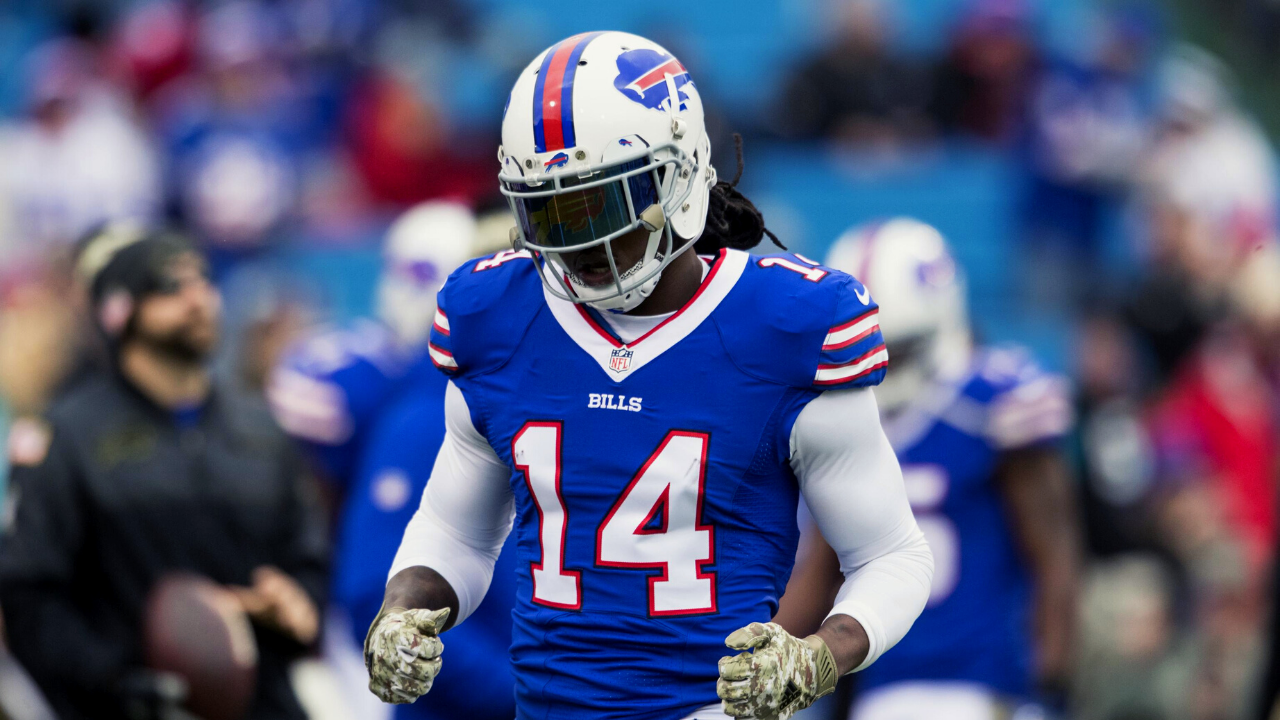 Wide Receivers from this year’s NFL draft are expected to be one of the best WR classes in the NFL history…maybe the best in this century, at least. The previous best WR’s class in the last 20 years was the 2014 NFL draft class. This article is about their rookie seasons and the impact they had had on their teams.

The first WR drafted was Sammy Watkins. The Buffalo Bills drafted him from the 4th position. The Bills gave the 2015 first-round pick to Browns to move up five positions. Watkins has had a solid career, but he didn’t meet expectations for a player drafted that high. Buffalo was an average team. They had a problem with QBs. Their starter was E.J. Manuel, probably the worst starter in the entire league. Manuel was benched after the 4th week and was replaced with Kyle Orton. Also, the Bills didn’t run as they expected. Fred Jackson and C.J. Spiller regressed a lot. They had three solid young WRs with Woods and Hogan. Watkins’s rookie season was very good. He immediately became the number one WR on the team. He was Buffalo’s best offensive player that year. Watkins finished his rookie season with 65 receptions for 982 yards and 6 TDs with one fumble. The Bills finished with a 9-7 record as a 10th team in AFC. Sammy Watkins now plays for Kansas City, on a one year contract for $9M.

From the 7th position, the second drafted WR was Mike Evans. Tampa was awful that year (a 2-14 record), but Evans was a fantastic choice. The Buccaneers didn’t have anything that year. They didn’t have a decent QB (their starters were Josh McCown and Mike Glennon). They didn’t have a running game. TEs were awful, too. The only good player was a 31-year-old Vincent Jackson. This was Jackson’s last season with 1000 yards. Playing with him was great for Evans – he had a great receiver to play with and played the number two WR in his first season. Evans finished the season with 68 catches for 1051 yards, and 12 TDs without a fumble. Mike Evans signed an extension with Tampa until 2024 on an annual contract of $16.5M.

Odell Beckham Jr. was the 3rd WR selected on the draft. The Giants were above average offensively, but overall a below-average team. They finished the season with a 6-10 record. Manning played one of the best seasons in his (HOF) career. The running game was solid with a rookie Andre Williams and a veteran Rashad Jennings. Ruben Randle (WR) and Larry Donnell (TE) played well. Even though Beckham had missed the first 4 games due to an injury, he was the best Giants’ player that season. He recorded 91 catches for 1305 yards and 12 TDs with only one fumble in twelve games. Giants traded Odell to Cleveland Browns. He has a contract until 2024 for $18M per year.

The fourth WR drafted in the first round was Brandin Cooks. The Saints sent their 3rd-round pick to Arizona to move up seven places. Cooks was viewed as a slot receiver at that time. The Saints were loaded on the offensive side of a ball, but they decided to add more speed with this selection. They were the best offensive team in the league, but at the same time, they were the second-worst defensive team. Cooks played the first 10 games of the season but missed the rest of it due to an injury. He had 53 catches for 550 yards and 3 TDs with one saved fumble. If we compare Cooks with his teammates, he was the most targeted WR in those ten games, but far less productive. Marques Colston had 15.4 yards per catch, while Kenny Stills had 14.8. With 10.4 Cooks was even worse than TE Jimmy Graham, who had 10.5 yards per catch. After his rookie campaign, Cooks had four consecutive 1000+ yards seasons. The Saints finished the 2014 season with a 7-9 record. Cooks changed a few teams in a meanwhile. Hi is currently in Houston. He has a contract until 2024 for $16.2M annually.

Kelvin Benjamin was the last WR drafted in the first round and the first one to play in a playoff game. Being selected at the 28th position, he immediately became WR number one for Carolina. Carolina’s number two receiver that year was a veteran Jerricho Cotchery, who was in his 11th NFL season. Carolina was among the top 10 defensive teams and the top 10 running teams. Also, TE Greg Olsen had 1000+ yards season. Even if Benjamin could have been considered as a bust, his rookie season was great. He had 73 catches for 1008 yards with 9 TDs and one lost fumble. Benjamin tore his ACL after a rookie year. After his ACL injury he was never able to come back and play at the level of his rookie season and his been out of the league since 2018.

The Jacksonville Jaguars drafted three WRs on this draft. The Jaguars were a bad team. Rookie Blake Bortles was QB, so the passing offense was also bad. The defense was poor to say the least. The running game was below average. WRs’ corps were made from three rookies plus Cecile Shorts in his 4th year. The first drafted WR by the Jaguars was Marqise Lee, from the 39th position. He had 37 catches for 422 yards and only one TD in 13 games. The second Jaguars’ selection was Allen Robinson from the 61st position (the 11th WR on draft). In the 10 games he played, he had 48 catches for 548 yards and 2 TDs. Allen Hurns was third in that group. He was undrafted, and the only WR who wasn’t selected in the first three rounds but had some impact on his team in the rookie season. Hurns was the best Jaguars’ WR that season and the only one who played all 16 games. He caught ball 51 times for 677 yards and 6 TDs. None of them are in Jacksonville anymore. Lee will play this season for the New England Patriots for $1M. Robinson is the number one WR for the Chicago Bears and has one more year with an annual salary of $14M. Hurns signed a two-year extension with the Miami Dolphins this year, for $3.5M per year.

The Philadelphia Eagles also moved up in the draft to get a WR. They gave 5th-round pick to the Titans to move up 12 positions. They drafted Jordan Matthews from the 42nd position. Chip Kelly’s Eagle’s had a very good roster, especially on the offense. Despite 9 Pro Bowlers (the most in the NFC) and a 10-6 record, Eagles finished the season as the 7th team in the conference. Matthews was the number two WR, behind Jeremy Macklin for the team. He finished the season with 67 catches for 872 yards and 8 TDs. The Eagles had one more WR in the third round. That was Josh Huff from the 86th position, 13th WR overall. He was 4th WR on the depth chart, but his impact was negligible. Jordan Matthews is a free agent at the moment, while Huff is playing at CFL.

The Seattle Seahawks picked up the 8th WR from the draft, Paul Richardson. The Seahawks were great that year. They finished first in the conference, but their game was based on the defense and the rushing, being first in the whole league in both categories. Their passing game was among the five worst in the league. And in that offense, Richardson was the 4th option (the 3rd WR). Richardson played 15 games and collected 29 catches for 271 yards and only one TD. Richardson is a free agent currently.

Green Bay drafted Davante Adams from the 53rd position which was, from today’s perspective, a great pick. The Packers were a great team that year, finishing in second place in the conference, right behind Seahawks. They had an average defense but their offense was great. This was the Aaron Rogers’ second-best season and the second MVP award. Eddie Lacy played at his best that season, along with Jordy Nelson. Randall Cobb had a 1000+ yards season, the first and the last time in his career. In those circumstances, Adams didn’t have many chances, finishing the season with 38 catches for 446 yards and 3 TDs. Adams is the first WR option in the Green Bay offense. He has a contract for $14.5M per year until the 2022 season.

Cody Latimer was the 10th WR selected on this draft and the biggest bust. He was selected by the Denver Broncos, who were great that season, finishing in second place in AFC. They had most Pro Bowlers that season with 11 being selected. Latimer was the 6th WR on the depth chart: only 2 catches for 23 yards and yet…somehow, Latimer is still in the business. He has on year contract with Washington Redskins for $1M.

The twelfth WR was Jarvis Landry. He played for the Miami Dolphins. Miami was an average team in every statistical category and finished the season with 8-8 records. Landry had a solid season, playing all 16 games. He had the most receptions on the team with 84 and was second at receiving yards, 758, as well as TDs, 5, in both cases behind Mike Wallace. Miami traded Landry to the Browns and still has three more years for $15.1M annually.

The 14th selected WR was Donte Moncrief, having been picked by the Indianapolis Colts. The Colts had a great offense. Their running game was below average, but their passing offense was the best in the entire league. Andrew Luck was great and healthy too. Moncrief was the 6th most targeted player, 4th among WRs. He finished the season with 32 catches for 444 yards (4th on the team, 3rd among WR) and 3 TDs (6th on the team, 3rd among WRs). Moncrief currently a free agent.

The last WR selected on the second draft day was John Brown. The Arizona Cardinals were a solid team. Carson Palmer had finished the season after the sixth game. WRs corps were the only reliable part of the Cardinals’ offense. Brown was third amongst WRs on the depth chart, but his production was similar to the production of Larry Fitzgerald and Michael Floyd. Brown finished the season with 48 catches for 696 yards and 5 TDs. Brown is now in Buffalo. He has two more years for $9M per year.

In the next article, I will analyze this year’s WRs corps, trying to compare these two groups and make some predictions about what we can expect from this years’ rookies.

Milos Ljubic is a freelance writer for Dynasty Owner.