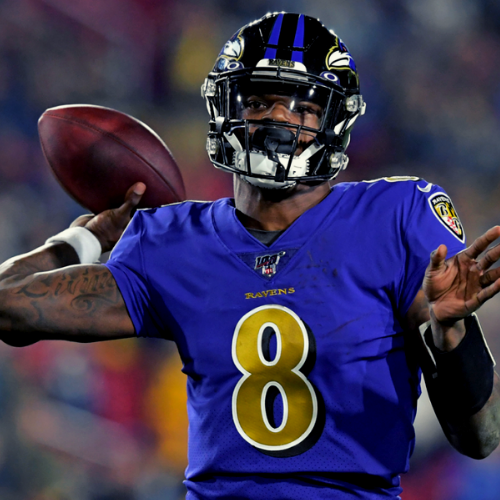 Taking A Dive Into The Rosters From Around The League

This time of year is typically the time of year when teams, trainers and agents hype up their players. We know how the world has changed in recent months and the NFL is no different in its approach to returning to “normalcy”. With the news of NFL staff and players testing positive for the Coronavirus, fantasy news is taking a backseat. As a result, fantasy players are missing out on the typical hyperbole surrounding pre-season roster news and notes.

In this series we’ll take a look at who’s who on rosters and how that may help in your drafts and early waivers.

Each week we’ll examine a division’s skill position current roster and predictive depth chart heading into training camp to see how that relates to their fantasy outlook.

This week, we start in the AFC North and will follow with NFC North next week:

This list appropriately begins with the reigning NFL MVP Lamar Jackson. The consensus knock on his scouting report was that he couldn’t keep his eyes downfield and relied on the run too much. His year two leap as a full-time starter resulted in 3,127 passing yards while dropping 36 TD’s. That was just passing; he also racked up an absurd 1,206 yards on the ground with 7 trips to the endzone.

RG III is a competent back-up that saw late game action last year without the Ravens having to adjust the playbook.

At running back, the incumbent 30-year-old Mark Ingram projects as the starter while Ohio State rookie JK Dobbins waits in the wings. Harbaugh recently stated that each of the top four runners all have a “designed role” on offense. This translates to Ingram and Dobbins in the heavy usage role, Edwards resuming the power back/clock-killer role and 2019 dynasty draft darling Justice Hill seeing his value in a satellite back role.

While Ingram is the present starter, Dobbins pedigree as the 2nd leading rusher in Ohio State history will be hard to keep off the field. Edwards won’t return enough fantasy value week to week and Jackson is an anti-checkdown QB that utilizes his own feet as his checkdown outlet instead of the unfortunate Justice Hill.

The wide receiver group is young and talented. Hollywood Brown made an early season splash last year before his injured foot caught up with him. He impressively posted a 46/584/7 line while playing at “Less than 100%” according to Harbaugh. Boykin and Moore figure to be the other two starters while veteran Willie Snead sees work in the 4 WR sets. Duvernay and Proche are the other names to watch here. 3rd round selection, Duvernay is built like a running back and has crazy speed. Proche is a scrappy route runner that plays above his size.

Boyle and Andrews are both considered starters. With the departure of Hayden Hurst to Atlanta, both figure to see more snaps. Andrews, the better receiver of the two, burst on to the fantasy scene last year rewarding those who drafted in round 10 and beyond. He has the rapport with Jackson and is a stud after the catch. He will be one of the first TE’s off the board in dynasty and redraft leagues this year.

The 2020 NFL Draft #1 overall pick and 2019 NCAA All-Everything, Joe Burrow leads this group of Cincinnati QB’s. Burrow steps into a nice situation with a fantastic receiving corps, an offensive minded coach with something to prove, a sound run game and he gets 2019 no.11 overall pick, Jonah Williams back from his redshirt medical rookie year from a torn labrum. Burrow could push for high-end QB2 numbers and conceivable sneak into low end QB1 territory in year one.

Mixon has been one of the most underutilized talents in the past few years. He is a solid, heady runner with very good hands that is ready to explode if given the chance. He is one of the few NFL running backs that could be first on a depth chart at: starting RB, Goal Line RB, and 3rd Down RB.

Bernard has been a very steady contributor as a Bengal but it seems that his best fantasy days are behind him. Williams is a 2019 6th pick that earns his pay on special teams and Rodney Anderson’s NCAA pedigree might not see the light of day on this roster. 6’4” 235lb rookie grinder Jacques Patrick is at the end of the bench and could carve out a role as a short yardage back.

This WR group has loads of talent. This could be one of the best WR rosters from top to bottom in the NFL. Injuries have certainly played their part from the squad putting it all together but a healthy 2020 is hopefully on the horizon. Green is the former fantasy stud that leads this group and has Tee Higgins waiting to claim his position as the Alpha. Boyd is a route technician that is undervalued yet again in early season mock drafts. Higgins will play early and often with Ross playing the situational field stretcher role that he was born for. Even Tate and Erickson were valuable mid-season fantasy role players last year. From WR1-WR6, this team is stocked for the rookie Burrow.

As for TE’s – nothing really to see here. Go back and look at the wide receivers.

Former no.1 overall pick Baker Mayfield is poised to bounce back after an erratic year that can be blamed more on the coaching inadequacies than the actual player’s output. He has a new coach with a solid offensive resume, an upgraded offensive line and some new receiving targets to throw to.

On paper, the 2019 offensive weaknesses were addressed, and it should be a bounce back year for the talented Mayfield. The Browns are in more than good shape with their back-up QB Case Keenum. Keenum is familiar with Stefanski’s system and will be an apt tutor for Mayfield. He also brings sound NFL experience to the QB position if Mayfield were to ever miss time.

Both Chubb and Hunt could be no.1 RB’s on most NFL teams. Cleveland is in good shape with what turned into a formidable time-share at RB down the stretch last season. Chubb is teetering on elite running back status and Hunt would not be far behind is given the opportunity and volume again. Hilliard is a good-not-great weapon in the passing game while Johnson was a capable player at USF but won’t matter much in fantasy terms.

OBJ and Landry are the stars here. With enough talent to match their personalities, they will benefit from the extra time off to heal their bodies. The question is who will be the third WR in the rotation? Higgins is the underappreciated veteran whereas this new regime has been very vocal about Peoples-Jones. Expect an early season rotation of Higgins with 2018 6th rounder, Ratley sprinkled in. Peoples-Jones has a clear shot at playing time if he can outperform Higgins which last year’s staff never seemed to like.

The tight end group has some talent. Njoku can jump out of the stadium but hasn’t quite put it together on a consistent basis. Consistency and reliability are what a team wants from their tight end and Hooper gives you just that. Hooper’s price tag of $44 million/4yrs makes him the highest paid TE in the league. He will be hard pressed to see the 93 targets from last year with Atlanta, but he will certainly be a welcome addition for Mayfield. 2020 4th round Bryant is an athletic project out of FAU. He was one of the better TE’s in this year’s underwhelming TE class but will benefit from learning from these veterans.

This team could have gone places if not for the injury to Roethlisberger. The Steelers represent the model why analytics matter. Sporting PFF grades of 15th overall with the 32nd ranked offense and the no.1 defense while posting an 8-8 record, you will never see a more middle of the road finish than last season’s Pittsburgh Steelers.

With a healthy Big Ben practicing yoga-happy-hour while sporting a beard that would make Grizzly Adams jealous, this team could quickly rebound as an AFC contender. The back-up QB position play was abysmal last year with a once promising Mason Rudolph soiling the bed and a fowl performance from Devlin “Duck” Hodges.

James Conner leads this complicated backfield of misfit running backs with uncertain roles. When Conner went down last year, we were treated by promises of waiver disappointments of Jaylen Samuels, Benny Snell Jr and even fullbackish Trey Edmunds.

Enter Anthony McFarland; the fourth-round selection out of Maryland that could inject some juice into this quagmire of a backfield. McFarland doesn’t project as an every down back, but he could burden some of the load from Conner. Conner is probably grossly undervalued in drafts this year due to a spotty 2019 campaign, but he certainly has the running and receiving ability to return high end RB2 numbers.

This WR group has many familiar names but not much fantasy production. Smith-Schuster leads this group of young receivers that are sure to improve with steady QB play. JuJu shines in the slot but will rotate there with the ballistic Diontae Johnson. James Washington has shown promise but has been woefully inconsistent. Big-bodied rookie Chase Claypool will be a welcome target in the redzone for Roethlisberger. There has been talks of more four wide sets consisting of Smith-Schuster and Johnson on the inside while Washington and Claypool or Cain operate outside.

The TE’s are led by veterans Vance McDonald and Eric Ebron. McDonald is not exactly fleet-of-foot but has been a nice outlet for the Steelers QB’s. While Ebron’s arrival to a freshly signed four-year $12.25 million contract adds versatility to the TE group. Ebron has a knack for finding the soft spot in zones but has hard hands. Very athletic with his 6’4” 235lb frame, he is very unsure about catching the ball at times. He has corrected his body catching issue from his North Carolina days but still tends to struggle with corralling the fast ball.

Check back soon! We will continue with the NFC North next week.

Chris Wolf is a freelance writer for Dynasty Owner.