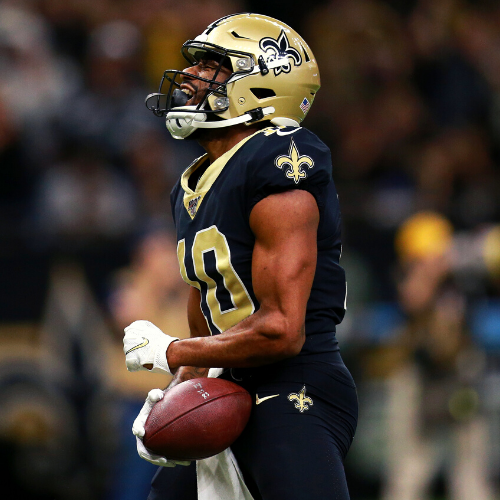 This week, it’s one of the Dynasty Owner Chase for the Ring matchups we wanted to see in 2019 but didn’t. That’s right, last year’s Champ Eddie Driscoll and New York’s Strongest take on the team that stormed up the Standings in the final two weeks and had the most points in the playoff finals (Dan Clarke of Yorkshire Roses). They didn’t face each other last year because they were in different Dynasty Owner beta leagues, but now we have the opportunity in 2020 to see this heavyweight battle of two of the best Dynasty Owners from last year.

Every week of the regular season and playoffs, we’ll present a set of players at each position (QB, RB, WR, TE) who you should have as a Starter in your Dynasty Owner lineup as well as one player per position who should be on your Bench or Practice Squad. We won’t recommend a kicker to Start or Bench though and these won’t be the obvious choices for Starters, like go ahead and start Patrick Mahomes, Christian McCaffrey and Travis Kelce (as if you weren’t going to do that already if you have them). Instead, these will be guys to Start who might not be highly owned or who were drafted to be a backup. For the Bench or Practice Squad choices, we’ll find typical Starters who shouldn’t be in your Starting lineup for the week based on matchups or past performance against a team. We’ll also review my Week 1 recommendations and see how those players fared.

For the purposes of this article, ADP and Dynasty Owner ownership statistics were current as of September 17th.

These Guys Should be Starters This Week

A poor start to the 2020 recommendations with just one Just Ok and three Bad recommendations. The Jimmy Garoppolo recommendation almost qualified as Good since he was tied for 13th best QB in Week 1, but instead he fell 1.4 Dynasty Owner fantasy points short of Cam Newton for the 12th spot. Tarik Cohen was closer to being Just Ok than either Jackson or Reed as he was the #46 RB for the week – meaning he was a very low-end Bench option. Jackson and Reed were clear Practice Squad players.

Let’s try to do better in Week 2 with these four recommendations:

Joshua Kelley (RB – LAC): The atmosphere for the Chargers first game at SoFi Stadium is going to be better than it was for their “home” games the past three years playing in front of more opposition fans at StubHub Center. Will that suddenly make Kelley worth being in your Starting lineup? No, but it was fun to type out. What makes him worthy of being a Starter this week is his play last week (12 carries for 60 rushing yards and a rushing TD) against the Bengals combined with the Chiefs poor performance stopping David Johnson of the Texans last week (19.9 Dynasty Owner fantasy points). Chargers Coach Anthony Lynn has suggested that starting RB Austin Ekeler could see his pass-catching opportunities “limited”. Not sure who would pick up those additional opportunities, but with Justin Jackson looking increasingly unlikely to play in Week 2, Kelley is most likely to pick up some extra chances to touch the ball. That makes him someone to look at for your Week 2 Starting lineup, either as a RB2 or FLEX.

Tre’Quan Smith (WR – NO): Somebody in New Orleans is going to have to replace Michael Thomas who is likely out for Week 2 and a few more weeks with a high ankle sprain. It should be Smith who gets a good portion of the nearly 12 targets that Thomas averaged per game in 2019. He’s not available in many Dynasty Owner leagues (available in just 3%, likely because of his low $855,131 salary), but with injuries to several WRs last week, many Dynasty Owners are probably looking to their Practice Squad for those backups who they drafted late, hoping for a breakthrough. Smith has a great chance to do that this week against the Las Vegas Raiders who let Carolina Panthers WRs catch 16 passes for 211 yards last week. Move Smith off your Bench or Practice Squad and get him in your Starting lineup this week.

Logan Thomas (TE – WAS): Jordan Reed didn’t work out as the TE recommendation last week against the Arizona Cardinals, but let’s try again by picking the TE facing Arizona this week. Logan Thomas, come on down! After all, the Cardinals are just one season removed from allowing nearly 20 Dynasty Owner fantasy points per game to the opposing team’s TE. Thomas is a guy who you can still find (along with his $3,072,500 salary) in the Free Agent Auction in 31% of Dynasty Owner leagues, down from 71% last week. As the #7 TE last week, he was picked up by a lot of Dynasty Owners and you didn’t pick him up to have him sit on your Practice Squad, did you? Put Thomas in your Starting lineup and see if he can have another TE1 performance this week.

Next up are the Week 1 Bench or Practice Squad recommendations. How did they fare (Good, Bad or Just Ok)?

Just like last year, my Bench recommendations were a little better, but the Rodgers recommendation was a huge mistake since he was Dynasty Owner Player of the Week. Kareem Hunt had only 11.1 Dynasty Owner fantasy points but was the #29 ranked RB (but #81 ranked among players eligible to be in the FLEX lineup spot) so he should have been on the Bench, but just barely. Amari Cooper was a clear Starter as the 18th best WR for the week, while Evan Engram should have been on the Practice Squad with his #36 TE performance. Let’s see if we can do better with this set of players who should be sitting on the Bench or hanging out with the Practice Squad this week.

Carson Wentz (QB – PHI): The Philadelphia offensive line was truly offensive last week, allowing Wentz to get sacked eight times by the Football Team defense. This week, it’s Aaron Donald and the Rams defense who had three sacks of Dak Prescott in the Rams 20-17 victory over Dallas on Sunday night. Lane Johnson should be back this week to help shore up the offensive line, as will RB Miles Sanders who can help take pressure off Wentz with a good running game and receiver to dump off passes. Sure, the Rams defense allowed Cowboys WRs to 18 passes for 190 yards but remember WR isn’t exactly an Eagles position of strength and Prescott was just the #18 QB in Dynasty Owner in Week 1. Wentz struggles for the second week in a row and should be on your Dynasty Owner Bench again.

Melvin Gordon (RB – DEN): If Saquon Barkley only got 12.6 Dynasty Owner fantasy points versus the Pittsburgh defense to finish as the #23 RB for Week 1, do you think Melvin Gordon will do better? Even with Phillip Lindsay possibly missing or being limited in Week 2 and Gordon getting more touches, it’s tough to recommend anything but sitting Gordon on the Bench despite his #16 RB rank in Week 1, ADP of 51 and $8 million salary. Dynasty Owners will have plenty of opportunities to start Gordon this season, just not this week.

Terry McLaurin (WR – WAS): Just because I’m recommending that you start Logan Thomas doesn’t mean I think all players on the Football Team are advisable Starters this week in Dynasty Owner. Unlike Thomas, I think Terry McLaurin should be a Bench option at best. First, he has had less of a connection with Dwayne Haskins than other Football Team QBs in his pro career. He’s averaging 13.9 Dynasty Owner fantasy points in 15 games as a pro, but only 10.45 Dynasty Owner fantasy points in games that Haskins has played the whole game. Second, he’s likely to be shadowed this week by Patrick Peterson who’s looking to be seen as one of the top shadow cornerbacks in the league again in 2020. Both of those factors lead to a Bench recommendation for McLaurin this week.

Noah Fant (TE – DEN): It worked last week so I’m going to use the TE facing the Steelers defense in this spot again in Week 2. Fant had a great Week 1 with 19.1 Dynasty Owner fantasy points (5 receptions, 81 receiving yards, 1 receiving TD) against the Titans on Monday night. He ranks as the 3rd best TE in Dynasty Owner after Week 1 and was drafted as a #1 TE with an ADP of 85.4 despite a salary of $3.15 million. Fant is a Bench recommendation for the same reasons as Giants TE Evan Engram was last week – the Steelers defense is really good in general and especially against TEs since they acquired Minkah Fitzpatrick from the Dolphins last year. Despite his performance last week, Bench Fant this week.

It’s time for our second Dynasty Owner Match-up of the Week for the 2020 season. Both teams won their league in 2019, but that can’t happen in 2020 because they are in the same league!  And now in Week 2 of the 2020 season, they must play each other. Yorkshire Roses is looking to start the season 2-0 while New York’s Strongest is trying to avoid their second ever Dynasty Owner loss and an 0-2 start to the 2020 season.

Based on the exclusive Dynasty Owner scoring projections for each team’s current lineup, it looks like New York’s Strongest has a slight edge over Yorkshire Roses (130.5 to 124.1).

Let’s look each team’s Starters and see if New York’s Strongest earns the advantage over Yorkshire Roses from their Starting lineup:

On to the Bench where Dynasty Owners get 20% of their Bench scoring added to their overall point total. Each team has the following players on their Bench right now.

The projections have New York’s Strongest back in the winner’s circle this week, but nothing is official until Monday Night Football is over. Check out the Tuesday recap article to see who actually won, if either one or both teams make their 2020 season debut on the Chase for the Ring Leaderboard and most importantly, if your team was good enough to make it there as well.

Please read the preview article each week. Maybe your team will be featured in the Match-Up of the Week – it’s going to definitely be someone other than New York’s Strongest next week. If you want it to be your team that is featured, then just tweet me (@SteveVT33) and check out next week’s preview to see if your matchup was chosen. Remember that there will be a recap article coming out every Tuesday and a preview article posted every Friday throughout the Dynasty Owner season. We will also have articles from Chris Wolf (@ckwolf21), Matt Morrison – The Jerk (@Dynastyjerk) and Jay Poundsee (@jaypoundsnfl) during the season as well. Follow all four of us plus Dynasty Owner (@Dynasty_Owner) on Twitter.