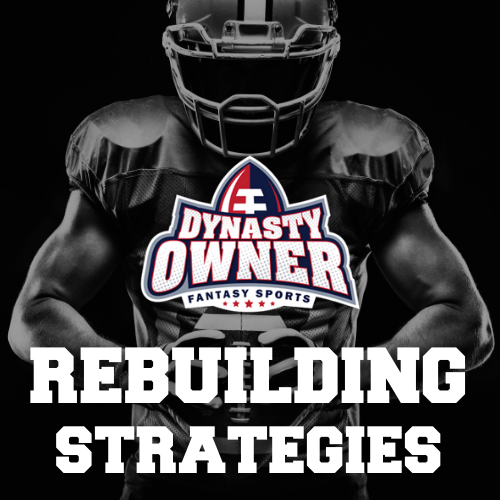 I want to start by saying congratulations to our 2020 champions, as well as a huge win for Viktor in the Chase for the Ring contest. Even some of our 2020 champions will need to start looking at a rebuild as soon as this year. If you don’t believe me just go look at Victors team in the standings and you will see he has a ton of tough decisions to make heading into next season, you can also find him and his team on a recent podcast with Tim and Seth where his team is on display. I bring this up to encourage some of the owners who are in a much worse rebuild than any of our champions, just keep at it. Rebuilds can happen because of a multitude of reasons and in a format like this I believe your best bet is to somewhat rebuild after just one lost season, especially if you have a few players set to go up in salary.

I could have easily chalked up this year as a loss and found a way to fit CMC, Mixon, and Hunt into my team next season, but I decided it wasn’t worth the gamble with 2 of the 3 being hurt this season and all 3 getting new costly deals. Instead, I’m looking at Dobbins, Gibson, and Dillion for years to come on a much lower total salary. With running backs seemingly always aging faster than any other position I recommend moving them just before or at the beginning of their 2nd deals, unless you are ready to win now of course. I hope everyone is prepared for all the tough decisions this off season will bring, as always feel free to contact any of us on Twitter with questions.

Before we start getting crazy in depth on rebuilds, I want to touch on a very important part of rebuilding in a format like this, which is orphan teams. First, I would like to mention that orphan teams will become available sometime in the future so those interested just keep an eye out for an announcement. Orphan teams are one of the most fun aspects you will find in any dynasty platform, if you have never tried out an orphan team, I highly recommend it.

There are several factors at play here with my favorite being that you are not mentally attached to any one player, for instance in a league I joined with my dad and his buddies I took an orphan team over and, on that team, I have zero of the old owners’ players, yet I still have Kareem Hunt ($3,259,000) who I took with my first ever pick in that league. A lot of players overlook this fact when comparing taking over a team to a startup league but it’s almost always true, I mean despite all the trouble Hunt has gone through I’ve never considered trading him, which hurt me late this season when I countered a trade that then fell through because I just couldn’t trade Hunt.

Orphans in Dynasty Owner seem like they will take a little longer than regular leagues when rebuilding because of the salary cap, with some of the issue being how much an unproven high-end rookie will make. If you are paying someone like Burrow ($9,074,534) each season and he turns out to be average, you will have an uphill battle to climb when playing top level teams. I know most will push back and say that’s the case in any league which is true, but those leagues don’t have players like Aaron Rodgers ($33,5000,000), or Brandin Cooks ($16,200,000) as available free agents with no hopes of being picked up, in most leagues. The player pool is much more limited in this format with their only being so much money to spend on so many roster spots.

The last aspect of orphan teams I want to touch on is flat out where to start. While this is up for debate, I believe you should start by setting up a 2–3-year plan and trying to be patient when executing that plan. This is what my plan looks like.

I know it may sound unrealistic when I say trade anyone over 26-28 years old, but in this format, I honestly feel it’s the best route to go. This can all vary depending on position as you may be able to stretch that age for a player at the tight end or quarterback position. At the tight end spot, we have seen players remain productive in terms of the position much longer than a running back or wide receiver with quarterback always being the king of dynasty longevity. The wide receiver position is one I would say you can push more towards 28, if you feel confident in your rebuilding skills.

Once a receiver gets near age 30 their production tends to start falling off and they almost always have a high salary that comes with them just look at A.J Green ($17,971,000) and Julio Jones ($22,000,000). I say trade them before they start to dip, and you lose value. At the running back position, I will be looking to trade around the start of their 2nd deal with keeping them a year into their 2nd deal being an option in certain cases. Any expert will tell you a running back is at his peak the moment he gets drafted.

When taking over an orphan team one of your first transaction priorities need to be acquiring two young tight ends. The tight end position rarely, if ever produces a star in the first 2-3 years, so acquire them early and let them develop. A great example of this is on my Dynasty Owner team I have Dallas Goedert ($1,406,068), Drew Sample ($1,376,574), and Adam Trautman ($1,124,850) in hopes they’ll all be producing relatively well in a year or two. If you happen to miss on these tight ends you can always try to trade for a Dallas Goedert, before he blows up and demands a Darren Waller trade price.

When taking over a team in this situation I’m assuming you will be struggling at the quarterback position… at least most will be. I highly recommend drafting or acquiring a quarterback before you start your first season, with the reason being you won’t be winning that first season and sometimes it takes a rookie a few weeks to get on the field, which will put a damper on your playoff chances. Finding players before they develop will help any rebuild, but if you were able to get Justin Herbert ($6,644,688) just before his first start he would have been had for half the price that he is now. Another great example is Tua Tagovailoa ($7,568,859) this season and all the ups and downs he has faced, yet he’s still shown promise for the future. If you really dig into it, I’m willing to bet only a handful of teams had a starter on Tua’s fantasy level.

Rookie and 2nd year wideouts tend to be cheaper to acquire than a wide receiver of Deandre Hopkins ($16,200,000) level. If you are going to trade early during your orphan team rebuild you should be targeting players like CeeDee Lamb ($3,502,503), as he is projected to end up being a Hopkins type player eventually, he will also be half the salary for many years to come. Rookie receivers come into the league in their early twenties and usually produce all the way through their age 29 season. As Rich Dotson always says about young receivers “what feels like an overpay today, will be an underpay tomorrow.” I would also recommend taking chances on your favorite struggling rookie receivers as they tend to start slow and blow up later, cough cough Justin Jefferson ($3,280,701). Another great strategy is targeting injured rookie receivers like Michael Pittman Jr. ($2,153,212) this season.

After your first season when things are starting to look up and you have a bunch of young studs on your roster almost ready to compete, it’s time to target your running backs. You can trade for running backs, but they will cost you if they have a clear role with any type of volume. Your best bet to acquire running backs are hitting your draft picks and get lucky in free agency. If you end up missing on draft picks you can turn back to the receiver strategy and target players who are injured or starting slow like J.K. Dobbins ($1,432,359) this season. Owners almost always hold good running backs for a king’s ransom, so I tend to try and find other avenues when acquiring running backs. You could always just find the next James Robinson!

This may be an unpopular take with some but I’m a firm believer in having to give up assets when it’s time to end a full rebuild. The only possible way to avoid this is to hit on everything, which almost never happens. If you have managed to get this far still having yours and other owners draft capital, it’s time to cash it in for a sure thing. There is nothing that’s guaranteed in fantasy and those percentages drop even more with rookies. I know it may be hard but do not be afraid to overpay a little at this point for a top tier player, especially at the weak spot on your roster. There are a lot of owners out there who miss a championship because they held onto their draft picks like golem holds the ring.

As you can see orphan teams can be extremely challenging and a tough task to complete, but most of us are here for a fantasy challenge and this could be right up most of our alley. One thing I have yet to mention are the rare cases of an owner receiving an orphan team that doesn’t need much work. While rare this does happen, in fact I’ve seen owners take over a solid orphan team and win a championship right out the gate. The last thing I want to touch on this to anyone considering an orphan team is don’t get overwhelmed and be patient when making deals, the first deal isn’t always the best, in fact it’s usually the worst. I hope everyone enjoyed this season and plans to be back next year. I also want to challenge everyone who reads this to invite a few friends to the platform, the more that join the more Dynasty Owner is capable of. As always enjoy your Chase for the Ring 2021 edition!