Intro to Rebuilding and Retooling Your Roster 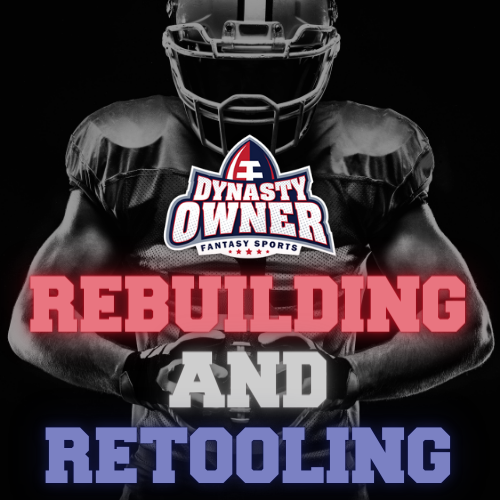 Intro to Rebuilding and Retooling Your Roster

Whether any of us owners want to admit it or not, we have all been through a rebuild at some point in our dynasty careers. If you have played dynasty 10 plus years and have managed to never rebuild, congratulations that is near impossible to do. Many things may cause an owner to rebuild in fantasy, with none being more of a nuisance than the classic injury bug. Over the years I’ve played fantasy football, I’ve witnessed countless juggernauts lose due to injury, heck I had a team I thought couldn’t be touched lose this week by 1.8 points because Julio didn’t play and I was forced to start Mike Williams, who put up a big fat goose egg, as well as DJ Moore out with COVID-19.

These types of moments can happen at any time making depth so important to winning a championship. I’ve been told more than once that in fantasy making the playoffs consistently determines your skill, once you are in the playoffs its mainly luck, with most teams in the playoffs on the same level. I truly believe the statement given simply because anything can happen in fantasy and as we have all learned projections mean absolutely nothing in fantasy. One great piece of advice I can give you is to make the rebuild fun. If you go into a rebuild upset because your team is horrible it more than likely won’t turn out well, but if you get excited do some research and find your rookies, rebuilding can be every bit as fun as winning.

In this article I will quickly break down the different terms you will hear when talking about rebuilds, timing of a rebuild, when you should consider a rebuild vs. a retool, and what challenges rebuilding presents in Dynasty Owner. This is the first article of many geared towards rebuilding your team, each article will go in depth on the different topics and the strategies behind them. Also, some of the best info you will find on Dynasty Owner comes from reading articles on the site and watching the live streams, both can help immensely in your rebuild. With this platform being so unique, articles and streams will give you an advantage over those who don’t watch or read along consistently.

The most common terms you will hear with this is either rebuild or tear down. Rebuilding or tearing your team down is exactly how it sounds, it’s a full on rebuild where you look to trade pretty much every player on your roster who holds value another owner can use. There are a lot of players who use the terms rebuild and retool with the same context.

Retooling can also be used when your team is hit with injury and you need to find equal production to fill the injured players spot in your lineup. Middle of the road is another term you may hear when talking about certain dynasty teams.

The middle of the road is the worst place to be in fantasy, meaning you’re too good to get the 1st overall pick, but you’re also not good enough to win it all. Middle of the road is no different than your favorite team picking 10-20 every year in the NFL draft, missing the cream of the crop. The last term I want to talk about is tanking, tanking is when you want to lose at all costs to get the best draft pick you can. There are a few different methods to tanking, but in my opinion only one of them is the right way to go about it, which is trade your good players away for young breakout candidates who aren’t producing just yet and play them. The wrong way to tank is to blatantly try to lose by not setting a lineup, while this is a full proof plan it’s not fair to other owners in the playoff hunt. I by no means am saying not to tank just use proper fantasy etiquette when doing so.

Timing seems to be everything when it comes to rebuilding or retooling your team. If you are in the middle of the offseason most players, you trade will bring back less value than in season. The main reason that causes this is the eye test, for instance someone is much more likely to overpay for a player in the middle of a great season compared to a player someone hasn’t seen play in months. A great example, if you are an owner with CMC right now is probably the worst time to trade him. Any owner you send a CMC offer is likely going to counter with less due to not seeing him play in what feels like over a year, on top of that he’s injured, and can’t help anyone win right now or anytime soon.

A rebuild can be expedited by nailing the timing of trades but can also add on a few years if you miss on your trades. I have done quite a bit of digging on timing of rebuilds and I have found one answer is close to universally agreed upon, a week or two before the trade deadline almost always brings back the most value. If you are a trade deadline rebuilder always be sure to follow injuries close, as the owners with injured players tend to panic when trying to find a suitable replacement. While timing is almost everything when trading it is still up to the rebuilding owner to acquire the correct pieces and hit on their draft picks or its back to the bottom they go.

The last two things I want to touch on are why any owner would consider a rebuild, I mean you’re almost guaranteed to lose at that point, along with a quick look at some of the problems Dynasty Owner presents when starting your rebuild. Going into your season you have one thing on your mind most years, win a championship. So why on earth would anyone realistically want to rebuild? As a wise man once said in dynasty “even when you’re losing, you’re winning”, meaning if you finish dead last, you’ll have someone like Trevor Lawrence, Justin Fields, and plenty of stud position players staring you in the face. While I realize no owner truly wants to blatantly lose, sometimes it’s the only option if you want to win quicker. The true challenge here is learning how to rebuild and still managing your cap space in the coming seasons. For instance, you don’t want to go out and acquire 3 or 4 studs on cheap deals who are set to get  likely having to drop someone. The salaries also make rebuilding extremely strategic because if you are a team with loads of cap space you can afford to take on a bad contract to gain a young player or draft capital.

A trade I made involving this strategy was moving off Julio Jones ($22,000,000) for Reagor (3,317,669), A. Green (17,971,000) and a 2022 1st. In any other league no owner in their right mind would trade Julio for Green and Reagor but when drafting Julio, I knew with how expensive he is, and I would need to amnesty him at the end of the year. Instead, I was able to eat Greens salary, give him a stud, and get Reagor and a 1st on top of it. I also used this strategy when acquiring Gibson ($1,226,433), and draft capital and I used Greg Olsen ($7,000,000) to open space up for my trading partner which ended up closing the deal. I have found that owners will pay to open space on their roster and are much more likely to pull the trigger if you are willing to eat a bad deal in return. The most important thing to remember when taking on a bad contract is the contract length, if it’s over 2 years and you can’t amnesty find a different deal, not having space can cripple the best of teams on Dynasty Owner.

Hopefully this gives everyone a solid understanding on what to expect in these articles moving forward. If you have any topics or questions, you’d like in any of these articles feel free to reach out on twitter. As mentioned above these are going to be very in-depth articles on very specific topic’s on rebuilding, as well as different types of strategies you can deploy at different stages of your rebuild. It will also include a few retooling articles for those of you that went out and killed it this season. In dynasty there is never a good time to be satisfied with your roster or draft capital and you should always be looking for more talent to improve your roster, and never forget about the bottom end players.

As sad as it is to see the end of the fantasy season come to close in the coming weeks this is when it really starts to get fun in Dynasty Owner with so much going on in the off season. The off season is truly what makes this platform so different and I hope you all enjoy it as much as I will, as always good luck on your Chase for the Ring!