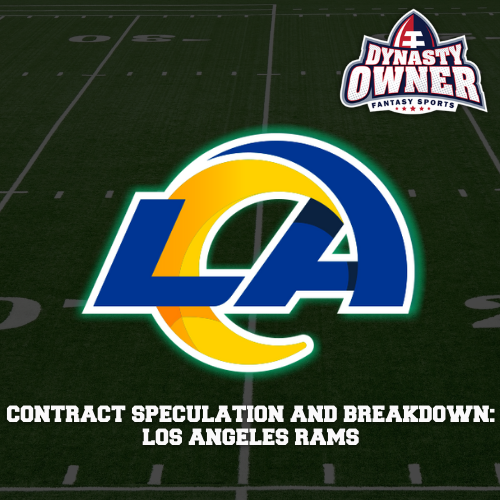 I hope you all read my article last week, and I also hope that you watched the video that paired with it.  If you haven’t, I suggest you go back and read that article first as it details my role as a writer in the offseason.  You can find all the articles that Nate, Jay, Steve and I put out on dynastyowner.com.  In addition, please subscribe to Dynasty Owner on YouTube to get access to the latest mini videos that all four of us make.  I appreciate you supporting Dynasty Owner and all of us as writers.

Today we are going to discuss contracts for a team that is near and dear to my heart.  Let me rephrase that…” they used to be near and dear to my heart.”  Yes, I used to be a Rams fan.  I was born and raised in St. Louis, MO, and I still live here.  I grew up watching Rams’ games with my family, and (as I’m sure you can guess) the pinnacle of my Rams’ fandom came almost 21 years ago.  Super Bowl XXXIV was one of the best nights of my life, at least as an adolescent.  I sat and watched the entire game with family and neighbors, and I celebrated (not really knowing what I was seeing) as Mike Jones tackled Kevin Dyson to seal a St. Louis Super Bowl.  We all went outside to bang pots and pans and then shot off fireworks.  A truly great night.  I casually followed and watched the Rams throughout the Marc Bulger, Sam Bradford and Jeff Fisher years.  What’s interesting is I was surprisingly indifferent when Stan Kroenke packed up and took them to the coast.

Maybe it was the pitiful seasons the Rams produced leading up to the exodus.  Maybe it was the fact that I had accepted a move was inevitable.  Maybe I just didn’t care anymore.  This is what I do know…it was freeing.  Not that I spent a great deal of time invested in watching the Rams, but I no longer had to care or worry about my team finishing below .500 for the tenth consecutive season.  It was over.  I had no team.  I didn’t fully appreciate it at the time, but it was a blessing.  I no longer felt compelled to adjust my fantasy football drafts based on home team biases.  I stopped blacklisting all Seahawks, 49ers and Cardinals players just because they were rivals in the NFC West.  (Truth be told, there weren’t many Rams players that were rosterable during the end of their St. Louis tenure.)  My point is this…biases of any kind are a nasty habit to fall into, and we adopt them much easier than we think and oftentimes we don’t even realize it.  Throughout this article, I’m going to sprinkle in some biases that surrounded Rams’ players in the 2020 season.  As always, let’s start with some contract speculation…

I once again have three free agents that I would like to talk about.  They are Malcolm Brown, Gerald Everett and Josh Reynolds.  These aren’t the only Rams’ players that are set to become free agents in the offseason, but they are the most impactful for Dynasty Owner.

Malcolm Brown is an unrestricted free agent following the 2020 season, and he will be free to sign with whicher team he likes.  In a crowded backfield, Brown finished as RB44 and averaged 7.2 fantasy points per game in the games that he played.  Due to a slow start by Cam Akers, Brown was able to finish the season as the second ranked running back for the Rams in terms of fantasy points.  Here is my honest take on Brown.  I think he needs to be owned in every league.  I don’t anticipate him making much more than his current contract ($1,650,000 per year).  I think his upper limit is $3,000,000 per year, and it depends on what team he signs with in order for me to determine if that’ll be a value.  If he returns to LA, I can’t imagine he would match his 2020 fantasy output.  As I stated earlier, Akers will be the lead back in 2021.  He is the most talented runner, and all that it took was a little time to prove it.  We obviously know that Darrell Henderson is still committed to LA for the next two years.  If the Rams resign Brown, it will be more of an indictment on their commitment to a running back by committee as opposed to a positive outlook for Brown himself.  I expect Brown to move on from LA and if he does, I’d look for him to get picked up by a team that’s looking for an average running back in case their lead back gets injured.  I’d compare Brown to Mike Davis in that way.  He isn’t a particularly special runner, but he can mostly do what is asked of him.  Keep rostering him until his contract situation becomes clearer.

Second, we have Gerald Everett.  Everett provided a disappointing season.  He finished as TE24 while his teammate Tyler Higbee found lukewarm success as the TE17.  Everett is about to finish up his rookie contract that is valued at $6,044,469 for 4 years or $1,511,117 per year.  Similar to what I wrote about Christian Kirk in the last article, Everett was a value even with his lackluster season, but he was probably rarely started last season.  He tallied only three games above 10 fantasy points and his highest total was 13.0.  We’ll see if he can part ways with the Rams and make his way to a team with a void at tight end.

Last and most importantly, I want to talk about Josh Reynolds.  Reynolds is one of those players that I believe has an unfair bias against him.  He (probably fairly) was criticized because “there are just too many mouths to feed in LA,” or “Woods, Kupp and Higbee are all more talented than him.”  Both of these statements are probably true, but that doesn’t mean Reynolds is not talented.  He needs a team where he can go and become the true number two wide receiver on that team.  That team will not be the Rams though.  I believe LA will let Reynolds walk, and he will sign with a Green Bay or a Houston type team.  In either one of these scenarios, I believe he would emerge as a reliable receiving option for a top tier quarterback.  The best part (not for him unfortunately) is that his next contract will not be expensive.  I predict he’ll receive something similar to Keelan Cole’s expiring contract (1 year at $3,259,000).  I have Reynolds as a conservative bye at the moment.  Don’t spend a lot to get him, but if you can use him in a package deal as a throw in, I’d be a buyer for sure.

Like the last article, today I’m going to be breaking down two contracts.  The first player is one of the hardest to evaluate in Dynasty Owner.  The player is Robert Woods.  When I say that he is one of the hardest to evaluate, I don’t necessarily mean that as a negative, just that he has a very odd salary for a wide receiver mixed with a WR2 production.  Woods is about to be on the final year of a five year contract worth $6,800,000 per year.  That seems very cheap for a player of his production, doesn’t it?  I would say that’s very productive.  Let’s compare him to like salaried wide receivers…

This is Robert Woods compared to every other “rosterable” wide receiver that makes between 6 and 8 million dollars per year.  What stands out to you?  What stands out to me is that over the past two seasons Woods has been the most productive player on this list by far.  What also stands out to me is the fact that he is one of only five players on this list of nine that still has a contract in place.  (The other four receivers that aren’t going to be free agents are aged 33, 34, 27, and 31) Woods is currently 28 years old.  What I’m trying to say is this…Woods is in what I would call “the second contract sweet spot.”  He is old enough to have made it past his first contract, but he was not so productive in that first contract that he demanded top tier wide receiver money.  And much like Devante Parker, he broke out late.  This is Robert’s first eight seasons in the NFL…

These are season averages for the amount of time listed.  Over Woods’ first five seasons, he caught (on average) 47 less passes, 450 less receiving yards and 1.3 less touchdowns compared to his last three seasons.  This isn’t even taking into account his rushing yards that have averaged 142 and 1.3 touchdowns over the past three seasons.  You are paying a 52 / 646 / 3.4 price, but you are receiving 89 / 1,096 / 4.7 value.  In the simplest sense of the word, Woods’ contract is an extreme value.  He’s in the “sweet spot”.

(One other thing I wanted to mention is the fact that there is one more outlier from this list.  Corey Davis is the only receiver with a rookie contract.  This isn’t too surprising as he is the highest drafted rookie wide receiver that is still under his rookie contract.  Davis was drafted 5th overall in the 2017 NFL Draft.  Mike Williams (7th) and John Ross (9th) were also drafted in the Top 10 that year.  I just thought it was interesting and wanted to bring it up.  Davis seemed to hit the “sweet spot” with one year remaining in his rookie deal, which is good news for him, but it will most likely mean a steeper price for Dynasty Owners).

At any rate, Goff seems to have underwhelmed for the amount of money invested in him.  The underwhelming stats continue over into fantasy football and Dynasty Owner.  Let’s take a look at Goff’s 2020 season compared to his peers…

What do we notice about this list?  The first thing that comes to mind is the fact that he ranks second to last in points scored for quarterbacks that make over $29,000,000 per year.  (He really should rank last because Wentz shouldn’t count, but I left him on here to show the comparison.)  Oddly enough, Goff also is tied with Wentz for the longest remaining contract which is not a benefit when we’re talking about 27% of your DO salary cap.  The bottom line is that even at 13.4 percent owned, Goff is rostered in too many leagues.  I would much rather amnesty him and pick-up Roethlisberger or even Cousins.  Both quarterbacks are widely available, and their cap hit over the next three to four years will be significantly less.  The value is just not there for Goff.  As I’ve stated before, it’s not easy for these top contract quarterbacks to return value.  Wilson, Rodgers and even Tannehill did it last season, but it’s hard to predict.  If you end up with a Goff type contract and a Goff type 2020 season, it will be very challenging to compete for a DO Championship, let alone The Ring.  I like Goff as a real-life quarterback.  He’s above average, and he does enough for his team to win more often than not.  He just can’t be trusted in a contract dependent dynasty league.

Thank you for reading and keep an eye out for my video series that will highlight this article.  Please follow us on Twitter @DynastyOwner and subscribe to Dynasty Owner on YouTube.  Take care and be safe.