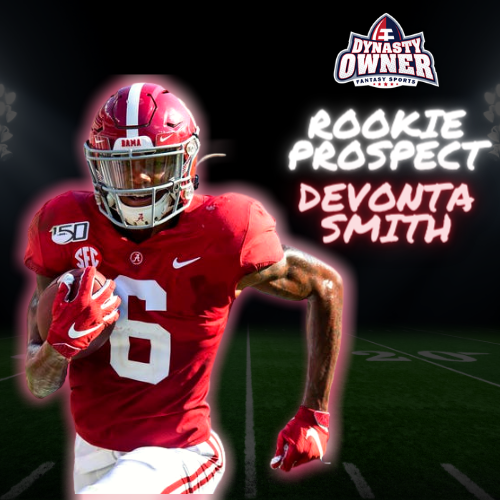 You most likely already know this name, after all he did become a college football star in 2020, but what does his transition into the NFL look like? Well, depends on who you ask. The film-grinders will tell you the Smith is one of the best receivers in the class and somebody who always impresses. Analytical minds might say that he had a late breakout age (he didn’t produce great numbers until his senior year) or maybe that he’s not worth a high pick because he’s two years older than Ja’Marr Chase. Everyone is right. So, this makes his prospect profile a hard one to comb through. Winning the Heisman did not make Smith a top wide receiver, but his all-around skillset combined with his high-level production are what puts him at the top.

It started with a Jaylen Waddle injury and ended with a Heisman. Not to disrespect Smith, who was a top receiver coming into 2020, but Waddle was the receiver everybody wanted to see this year. Once Waddle suffered a (nearly) season-ending ankle injury, Smith stepped up into the WR1 role at Alabama and thrived. One his way to winning the National Championship Smith recorded, 117 receptions for 1,856 yards and 25 total touchdowns. He set the SEC career receiving touchdown record (46), passing Amari Cooper (31) early in the season. Smith’s season (and career) will go down in college football history as one of the best.

Everyone around the league will be keeping their eyes peeled on the scale when Smith finally weighs in. If he comes out at his college listed weight of 175, some teams may push him down the board, scared of the lack of thickness. But if Smith can weigh in around 185 pounds, may doubts will be alleviated, as this puts him in a whole new level of comparisons. Smith needs to be shooting for 185, that’s the number that Marvin Harrison played at and he worked out okay. Outside of this factor, Smith will likely test well and will go into the NFL draft as likely one the of first receivers to be drafted.

Smith’s contract has a bit of range throughout the beginnings of the first round. While some have marked him as high as three overall (to the Miami Dolphins), he’s been seen as low as 18 overall (again to the Miami Dolphins). So it seems the consensus is that the Dolphins don’t pass on Smith twice. If we project him to be projected somewhere in the middle of that range, then his contract would likely mimic the deal that Henry Ruggs ($4,167,907) signed this past summer. That deal would give him 4-years at a total of around $16,671,626, though a bit higher of a draft position could see this number climb to around $20,000,000 total.

Well, I guess the obvious first fit is the Miami Dolphins. Pairing DeVonta Smith with his college quarterback Tua Tagovailoa ($7,568,860) just seems too exciting. We saw this last year with draftniks mocking CeeDee Lamb ($3,502,503) to the Arizona Cardinals to pair backup with Kyler Murray ($8,789,661).  The fit seems good, Smith would bring a different dynamic to the current offense which boasts two big receivers on the outside in Devante Parker ($7,625,000) and Preston Williams ($588,333). Smith has the ability to be used all over the field and would be a great (and familiar) weapon for whichever quarterback starts the 2021 season in Miami.

Another common landing spot for Smith is the Philadelphia Eagles. While they just spent a 1st round pick on receiver Jalen Reagor ($3,317,669) in the 2020 NFL Draft, the group of wideouts in Philly could still use help. At sixth pick it may be a luxury for a team that needs so much help along the offensive line, but whichever quarterback the Eagles decide to champion into the 2021 season, they need more weapons. Reagor ($3,317,669) and Smith would create a great 1-2 punch of young receivers to build around.

Lastly, I’ll have to mention a landing spot that I don’t think has been brought up a single time… the Arizona Cardinals. This team already has their WR1 in DeAndre Hopkins ($27,250,000) but there are some questions after that. Christian Kirk ($1,473,717) has failed to consistently impress and will be entering the last year of his rookie contract. There’s also Larry Fitzgerald ($11,500,000) who is likely mulling over retirement. With Kingsbury relying on a fast attack spread offense, Smith would be an incredible fit with all the motion and screens the Cardinals would be able to implement. The Cardinals don’t necessarily need a wideout in the first round, but if Smith is still around at pick 16, I would expect the front office to think long and hard about the future of their current receiver corp.