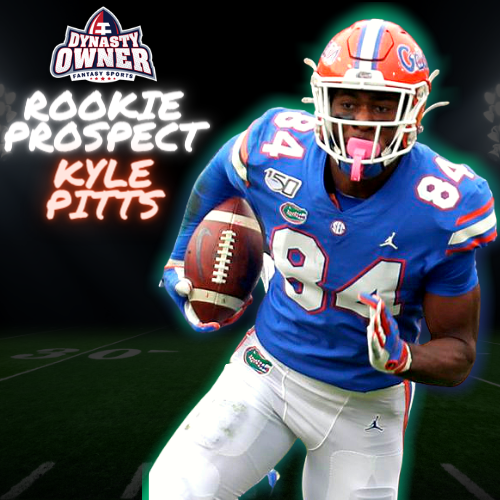 In 2019, with Kyle Trask the full starter for the first time, Pitts caught 54 balls for 649 yards and 5 touchdowns. These numbers, while not gaudy, put him near the top of the 2021 draft-eligible tight ends. Coming into 2020 it looked like a tight competition for TE1 in the draft class, but Pitts quickly made some headway to become the consensus leader of his position group. This past season Pitts caught less passes (43) but up his average to 17.9 yards per catch for a total of 770 receiving yards. This was to go with his 12 touchdown receptions, showing he was an all-around threat in the passing game, not just down the field but also in the red zone. After a successful college career Pitts is entering the NFL as an early declare and will only be 20 years old when the 2021 NFL season kicks off.

Pitts is not a player I would say is landing spot dependent, I believe he can be a top weapon in just about any scheme and offense, but at the same time his Day 1 fantasy success will be quite landing spot dependent. As he gets into the draft process, I expect him to run and jump very well, but with a draft process that’s still very much up in the air I wouldn’t be surprised to see Pitts skip a lot of the testing. Pitts is the bonafide TE1 in this class and there’s not much he could do to look any better. There’s a sizable gap between him and the next tight end in this class so I expect Pitts to go about the offseason conservatively, prioritizing health and interviews over measurables.

Last year was the first year since 2016 that we didn’t see a tight end drafted in the first round. This year will assuredly feature at least one tight end on Day 1, Pitts. He’s been mocked as high as Top-5 and has only “dropped’ in early mocks into the late teens. NFL teams know that elite tight ends can be a game changer for an offense and a safety blanket for any young quarterbacks. Also, there is a lack of high quality tight end play around the league and outside of five or so tight ends, a lot of teams could use an upgrade.

As stated earlier, just about any team could use Pitts on their roster. There are a couple teams however that are more likely to prioritize the position and be willing to spend a first round pick on the Florida prospect. Many people have tried to push Pitts to the New England Patriots at 15 but I don’t believe that landing spot makes too much sense. Bill Belichick just spent two 3rd round picks on the tight end position in the 2020 NFL Draft and going forward has too many holes to fill to afford such a luxury pick. So let’s go ahead and fade the noise there.

One of my favorite landing spots for Kyle Pitts is with the Los Angeles Chargers at the 13th overall pick. Hunter Henry is a UFA this year and has already played a season on the franchise tag. With a young stud like Justin Herbert ($6,644,689) leading the offense it makes too much sense to pair him up with a weapon like Pitts and locking up a dangerous combo for at least the next four years. If Pitts’ lands with the Chargers he likely becomes a top-5 dynasty TE from the get go and a near lock for a top-12 finish his rookie year.

If the Carolina Panthers decide against selecting a quarterback at the 8th overall pick, then there’s a chance they might look Pitts’ way. Ian Thomas ($801,999) was invisible for the 2020 season, and whether that is due to a lack of talent or the offensive scheme, the position could certainly use an upgrade. Fans are already drooling at the idea of Pitts and Joe Brady teaming up in Carolina, and I don’t blame them. While I think this landing spot is a bit more far-fetched than the Chargers, Pitts’ could be an extraordinary weapon in a creative offense like Brady’s.

One last possible landing spot for Pitt’s would be a little “sneaky”, and a bit of a fall from his usual projection, the Tennessee Titans. Going into the 2020 offseason Corey Davis, Jonnu Smith, Anthony Firsker, MyCole Pruitt, Geoff Swaim, and Kalif Raymond will all be free agents. This means that the Titans will be looking to retool their passing offense, and tight end will be a priority. Pitts’ would be a great replacement for Smith, and would continue the Titans’ current model of athletic pass catchers who can create big plays after the catch. Certainly one to keep in mind come draft day.