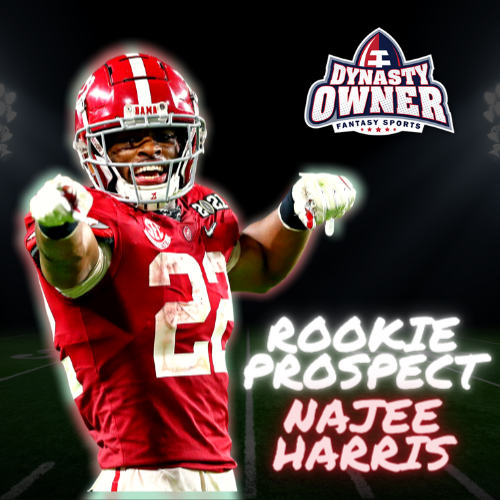 Coming into the 2020 season, most draftniks were caught between Travis Etienne and Najee Harris for the best running back in the class. By the end of the 2020 season, Harris has distanced himself enough from Etienne to be the consensus top runner. Eligible for the 2020 NFL Draft, Harris decided to go back to Alabama for one more shot at a National Championship, and it worked out. Not only did he win the 2020 National Championship, but he was also able to boost his draft stock enough to now be considered a possible first rounder, rather than the likely third rounder he would have been last year.

Harris finishes his Alabama career as the Crimson Tide’s all-time career touchdown leader, with 57 (46 rushing, 11 receiving), and his 3,843 career rushing yards place him at the top of the school’s history as well. His senior year production was quite impressive as he rushed for nearly 1,500 yards, at 5.8 yards per carry, while scoring 26 touchdowns on the ground. He showed off his ability to be more than just a runner though with 43 receptions for 425 yards and 4 touchdowns. With 30 total touchdowns in his final season, Harris cemented himself as a playmaker ready for the next level.

In a slight surprise, Harris accepted an invite to the Senior Bowl in Mobile, Alabama. Without a formal NFL Combine though it makes sense. Harris wants to get in front of scouts as much as possible and show teams that he’s worth a 1st round selection this year. He will want to show off that he can still dominate outside of the Alabama offense. This year’s Senior Bowl should be one of the most exciting, and Harris will be in the spotlight.

When it comes to projecting NFL Draft capital, running backs are always hard to predict. Harris could go as early as the late-teens or fall as far as the second round, simply because running backs don’t get drafted as high as they used to. But to at least give you a sense of what Harris’ contract could look like we’ll use Clyde Edwards-Helaire’s ($2,705,393) contract. That contract was signed for $10,821,570 over 4 years, and of course as 1st round selection would add in the 5th year option for a team to use. But will he go in the first round? Let’s look at some teams that could really use him.

My preferred dream landing spot? The Pittsburgh Steelers at pick 24. Now coming from a Baltimore Ravens fan that hurts to say, but as far as a product on the field and in fantasy, you couldn’t ask for much better. James Conner is a free agent and the Steelers have made no attempt to re-sign him, and Benny Snell ($805,517) and Anthony McFarland ($1,004,357) have done nothing to prove that they could lead a playoff team on the ground. The Steelers offense became one-dimensional this season as they struggled to establish the run.

Yes, the offensive line was a factor in that, but also Conner has struggled to stay healthy and isn’t a difference maker when less than 100%. Harris fits this scheme so well, a bigger back who can be used as a power runner, but also hit outside zone and catch the ball out of the backfield. This match could give Big Ben Roethlisberger ($41,250,000) his championship window for another year or two.

Trying to find other landing spots pre-free agency can be difficult as running back is such an easy position to plug-and-play, but another spot for Najee Harris that I quite like is the Buffalo Bills. Yes I know they drafted Zack Moss ($1,048,255) last year, and Devin Singletary ($1,108,956) the year before that, but in the AFC Championship game against the Kansas City Chiefs they were rolling out T.J. Yeldon (a free agent in 2021).

That is unacceptable for a team with Super Bowl hopes. The Bills have a pretty strong team all-around and grabbing the best running back in the class would help them go ahead and have the position set for the future. Harris can fit into just about any offense and make it better, and the Bills would be more than lucky to have him.