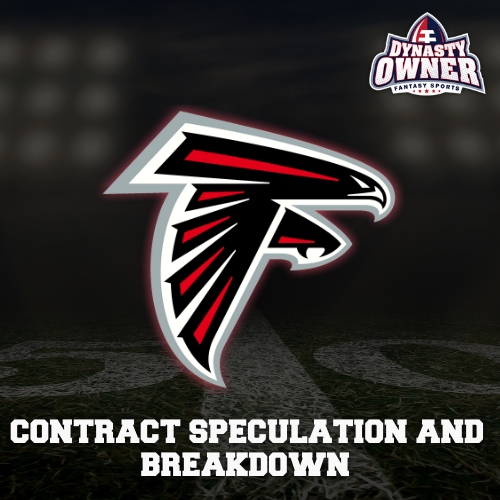 Good afternoon Owners, and welcome to a new “Speculation and Breakdown” article.

I want to start off by talking about the Stafford/Goff trade that happened on Jan 30th.  Matthew Stafford ($27,000,000) was traded for Jared Goff ($33,500,000), a 2021 third-round pick, a 2022 first-round pick and a 2023 first-round pick.  Whichever side that you think won that trade, you have to admit that this is a monster deal and one that will hopefully foreshadow the rest of the offseason.  Now, how does this affect us as Dynasty Owners?  If you are a Goff owner, I wouldn’t expect much of a change.  As I mentioned last month, Goff is a perfect amnesty candidate if you were unlucky enough to draft or pick him up last year.  Goff’s recent trade does nothing to make me think anything different, and in fact, it could make his dynasty outlook worse.  Once again I repeat, cut ties with Goff if you still own an Amnesty Provision.

Stafford may be a little different story however.  He is on a contract that has two less years remaining and $6.5 million less than Goff’s.  Stafford was more productive than Goff in both 2020 and 2019 on a per game basis.  I predict a decent uptick in fantasy production as Stafford moves to a better offence and one that will win more games than his last place Lions did in 2020.  All this is meant to say that I would seriously be considering picking up Stafford if he was available in my DO league.  He is only rostered in 72.16 percent of leagues and that needs to rise.

Well, as I said in my opening, welcome to a new article and also welcome to a new division.  We completed the NFC West in January, and now we turn our attention to the NFC South.  The NFC South is composed of the Falcons, Panthers, Saints and Buccaneers.  Here is a table of each team’s finish at the end of 2020…

“Perfectly balanced, as all things should be.”  -Thanos

I apologize for the pop culture reference, but that quote has always hit home for me.  I am a man that likes symmetry, so to see a perfectly symmetrical division…well that’s just pleasing to my eye.  What isn’t pleasing to the eye (at least for Falcons’ fans) is their 2020 record.  Last season looked to bring hope to the Atlanta fanbase.

An offensive team run by Matt Ryan, Julio Jones, Calvin Ridley and Todd Gurley was set to impress.  Well, the Falcons did score.  They actually finished middle of the pack as far as total points scored goes.  **(Three teams that made the playoffs actually scored less than the Falcons: See if you can guess who they are, and I’ll reveal the answer at the end of the article)  Lack of scoring didn’t seem to be the problem.  The problem was actually more their team defence and the fact that they were abysmal at winning close games.  The Falcons were involved in 10 one score games.  Of those 10 games, they lost eight.  Take from that what you will, but the Falcons were competitive in the majority of their games.  At any rate, let’s stop talking about generalities and jump into contract specifics…

As noted in the table above, the Falcons have only three notable free agents.  I define “notable” as free agents who directly pertain to Dynasty Owner rosters.  Simply put, these are players who are rosterable in our format.  These players are…

Whoa?  We’re gonna get some kicker talk in this article?  Not exactly.  I’m merely mentioning Koo as he finished the season as the K2.  This is where his speculation ends.  Kickers need to be rostered in Dynasty Owner as they are a position, but the only thing harder than predicting a kicker’s fantasy outlook is predicting where a free agent kicker is going to sign.  I may do a short contract breakdown on him when he does sign or re-sign, but until then, let’s talk about the running backs.

Todd Gurley and Brian Hill…where do I start?  Let’s start with the facts.  Gurley finished the 2020 season as RB27 and Hill finished as RB52.  Both seasons were disappointing in the end, although I don’t think there were high expectations for Hill.  Gurley started the season very strong as he posted nine touchdowns in his first nine games.  Well, it turns out that his high touchdown percentage is all that was holding his fantasy season together.  After Week 9, he had only 27.9 fantasy points…total.

Gurley was a suspect draft pick last preseason due to his lingering knee issues as well as his change of venue.  It’s hard to believe that he is only 26, but it’s very likely he is in the back half of his career.  While I don’t expect him to retire in the offseason, I think it’s possible.  Spotrac has his “Calculated Market Value” at 5.5 million dollars currently.

I think that’s the absolute top number that he would receive.  I have him pegged for around 4 to 4.5 million dollars per year.  As always, wait and see where he lands before making a long term decision.  I own Gurley in my Dynasty Owner All Star League, and I passed on Gurley straight up for Robert Woods prior to the playoffs.  I’m regretting that now.  If anyone gives you a halfway decent offer for Gurley, I would take it especially if you have adequate running back depth.

Brian Hill is the second Falcons’ running back I’d like to talk about.  Hill (like Gurley) is an unrestricted free agent.  Hill is also 26 years old, and he has a healthy 4.7 yards per carry for his career.  The perception is that Hill was largely inefficient last year.  While that may be true, he was on par with the rest of his teammates.  Let me show you…

So, we can see that all the Falcons’ rosterable running backs were close to the same efficiency, at least by this metric.  But how did they compare to similarly ranked running backs…

As we can also see, Jamaal Williams, Tony Pollard and Leonard Fournette are all backups yet they were much more efficient and almost outscored every Falcons’ back.  This is a long winded way of saying that the Falcons’ backfield had a poor 2020 showing.  So what can we expect moving forward?  This is my honest read…

I think Gurley will not be re-signed.  He was actually named the backup running back towards the end of the 2020 season.  He’ll sign with a new team.  Hill will be re-signed by the Falcons for a similar contract that he just completed.  Look for Hill to make around 2 to 3 million per year.  There is also little doubt in my mind that Atlanta will draft a running back in the first half of the draft.  Time will tell if that draft pick will become the projected starter, but suffice it to say, there really is no Falcons’ running back that can be trusted going into 2021 at this point.

Today we are going to be talking about a highly sought after tight end coming into the 2020 season (at least I sought him).  The player is Hayden Hurst.  Hurst, a 2018 first round pick, was traded from the Baltimore Ravens to the Atlanta Falcons in March of 2020.  This trade looked to, essentially, slide Hurst into the vacated role of Austin Hooper.  In 2019, Hooper posted a sensational line of 75 receptions, nearly 800 yards and six touchdowns while missing three games.  This was not an easy ask for Hurst to complete, but it is one that he had the skills and athleticism to achieve.  The reality is that Hurst did not live up to his preseason hype.  That’s not to say he didn’t have a productive season, but he was unable to post a dominant tight end season.  Here is how 2020 shook out for him..

As I said, this isn’t an abysmal season, but just adequate.  These stats were able to provide Hurst with a TE 9 finish.  Again, not terrible, but not great when you think about how scarce the tight end field currently is.  So what do we do with him?

Hurst has a year remaining on his rookie contract.  After that, he will become an unrestricted free agent.  He is 27 years old and he remains one of the better values as far as tight ends go.  In 2020, Hurst was drafted around the 8th round in most Dynasty Owner Leagues.  He was a common player that Owners targeted due to his low salary mixed with a seemingly high target share and talent.

I expect nothing much to change in this offseason.  Yes, Hurst has lost a year on his contract, but he will still have a year’s worth of that value before he signs a new one.  While the long term outlook for Hurst may not be the greatest, I expect him to meet and exceed his production from 2020 going into 2021.  As it is with every player, there is a chance that he signs an extension prior to the start of a new DO season, but I think that is unlikely.  Anyone currently rostering Hurst will not have a league winning tight end, but they will have a player that outscores their opponent’s tight end more times than not.

Following our discussion of Jared Goff a few weeks ago, I’d like to use Matt Ryan as a comparison.  Yes, they are different players and are in different stages of their careers, but I think this comparison is valid.  Both players are in a limbo type contract situation, and he’s what I mean by that…

Both Goff and Ryan are on above average contracts, but are only providing average results.

(Full disclosure: I typed these first two paragraphs prior to the news of the Stafford/Goff trade.  Regardless, the statements still stand.)

Ryan finished 2020 as the QB12 while Goff finished 2020 as the QB18.  Now when you compare that to their salary rank among quarterbacks in 2020, the numbers begin to skew.  Ryan ($30,000,000) is the eighth highest paid quarterback per year, and Goff ($33,500,000) is the fourth highest paid quarterback per year.  We already know that even if either of these QBs had cracked the Top 10 last year, they still wouldn’t be a great value as their salaries are just too high.  It would take a yearly performance close to what Wilson and Rodgers did to return value for their cost.

There are many rumors flying around that Ryan may have played his final snap for the Falcons.  I don’t know if that will end up coming true, but what I do know is that unless he purposely takes less money next year, (which he won’t) he won’t be rostered by many teams.  Similar to Goff, Ryan is a prime amnesty candidate as there are several quarterbacks that make over $30,000,000 that I would rather own.  Like always, I will update the community as soon as I have any info on Ryan’s departure from Atlanta.  For now, don’t expect him to be your starting quarterback in 2021.

Thank you for reading, and be sure to watch the video that relates to this article.  Next week I’ll be writing about a Super Bowl contender, and the team that I actually hope wins the championship.  By the time we talk next week, maybe The Tampa Bay Buccaneers will be crowned champions.  Please follow us on Twitter @DynastyOwner, and subscribe to Dynasty Owner on YouTube.  Take care and be safe.

**The Falcons outscored the Bears, Rams and Football Team in 2020