Players Who Faded in the Second Half of the 2020 Season

It’s not necessarily a guarantee that a player who has a poor second half of a season is finished from being productive. Aaron Rodgers had a significant decline in performance during the second half of the 2019 season, but turned things around in 2020 and was just named the 2020 NFL MVP. Guess that’s what happens when your team trades up to draft its “QB of the future” in the first round of the NFL draft.

On the other hand, Matt Ryan was better in the first half than the second half of 2019. He played fine in 2020, but didn’t turn it around as much as Rodgers did which was likely a disappointment to his Dynasty Owners.

A Tale of Two Quarterbacks

Aaron Rodgers and Matt Ryan have many similarities. Both are former first round draft picks and highly paid, veteran QBs who have only played for one team in their entire career. Prior to the 2020 NFL season, Rodgers had won a Super Bowl ring and the MVP twice compared to no Super Bowl rings and just one MVP for Ryan. And as you can see, coming into the 2020 NFL season, their performances declined in the second half of the previous season.

The 2020 NFL season was different in many ways, but many things remained the same. The performance of some players went down as the season went along. Here are five players, one per position (QB, RB, WR, TE and kicker), who saw a decline in their scoring in the second half of the 2020 season. Are any of them in line to be the 2021 version of Aaron Rodgers, or should Dynasty Owners resist the temptation to overlook how they finished the 2020 season? While all of them should be selected in 2021 Dynasty Owner drafts, deciding when to draft them will be a key question.

In response, Seattle fired Offensive Coordinator Brian Schottenheimer after three years citing “philosophical differences” as the reason for his departure (https://www.espn.com/nfl/story/_/id/30701471/seattle-seahawks-citing-philosophical-differences-part-offensive-coordinator-brian-schottenheimer). Will this change be the cure to their second half offensive woes? Will Wilson respond to the change like Rodgers did to his likely replacement being drafted after an “off” season? Or is the decline in Wilson’s performance in the second half a sign of problems that could keep him from the heights he reached as the top scorer in the first half of 2020 and in 2019 when he was the #3 QB in Dynasty Owner?

At $35 million per year for the next 3 years, it’s an important question for Dynasty Owners to examine this off-season. Wilson’s 2020 ADP was 70.6 and he was likely the first expensive QB off the board in most Dynasty Owner leagues (Dak Prescott had the second highest ADP of 89.5 for QBs making $25 million or more). Wilson earned that draft position in the first half, but not in the second half. Even with one of the biggest contracts in the league, Wilson will still be cooking for a Dynasty Owner team in 2021.

Ezekiel Elliott (RB – DAL) – The tale of two seasons for Ezekiel Elliott really isn’t about halves, but how he did with Dak Prescott as his QB versus how he did with the rest of the Cowboys’ 2020 signal callers. Using half seasons, he declined but not dramatically as he averaged 16.6 Dynasty Owner fantasy points in the first half of 2020 and 12.7 Dynasty Owner fantasy points in the second half. That’s a drop of 3.9 points per game, which is troublesome for a RB, but not a complete breakdown in performance.

At $15 million in salary for 2021, Elliott will be among the top played RBs in Dynasty Owner. His high salary didn’t depress his ADP in 2020 as he was taken generally in the first round (ADP 9.7), but is the decline in production for Elliott combined with Pollard’s improvement over the course of the season, a sign of things to come for Elliott?  Or will the return of Dak Prescott mean a return to his early season 2020 performance? Your answer to that question will determine whether you decide to draft Elliott and his $15 million salary in 2021 or leave him to be selected by another Dynasty Owner team.

Tyler Lockett (WR – SEA) – After seeing the split in Seattle’s offense performance between the two halves of the season, it’s not surprising to see a Seattle player listed here. In fact, both of Seattle’s starting WRs suffered a performance drop during the 2020 season. Both DK Metcalf and Tyler Lockett saw their Dynasty Owner fantasy points per game decrease from the first to the second half of the season. However, due to Lockett’s much higher salary of $10.25 million (versus $1.15 million for Metcalf), Lockett is the Seattle WR who more Dynasty Owners will be thinking twice about when to draft in 2021.

However, his second half decline in performance may lead some Dynasty Owners to hold off on drafting him. He averaged 20.3 Dynasty Owner fantasy points per game during the first half of the 2020 season (162.7 points in 8 games), but only 13.5 points per game in the second half (107.9 points in 8 games). Which version of Tyler Lockett you believe will be in uniform for the Seahawks this coming season will influence your opinion on his 2021 draft position.

Jonnu Smith (TE – TEN) – Smith is in an interesting position compared with the rest of the players on this list, as he’s the only one who is a free agent for the 2021 season. He is expecting a big increase in salary from the $776,572 he made in 2020 while playing for Tennessee. His payday as well as his eventual 2021 Dynasty Owner draft position will hinge on whether NFL teams and Dynasty Owners believe more in his performance in the first half of the 2020 season versus the second half.

For the whole season, Smith was the #15 ranked TE in Dynasty Owner. This was a slight drop from projections as he was drafted as the #11 TE on average (ADP 114.6). With the prospect of a new contract, Dynasty Owners will have to decide if Smith can replicate his early season performance with a new team (and at a new salary) in 2021 and be worth of drafting, or if he’ll be a highly paid TE who will be left to the Free Agent Auction until he can prove himself again.

Wil Lutz (K – NO) – No kicker saw a steeper decline from the first half of the 2020 season to the second half than Wil Lutz. After his first eight games, he had 74.0 Dynasty Owner fantasy points (9.3 points per game), which ranked him as the #3 kicker, behind only Jason Sanders and Justin Tucker. He only missed one kick in the first half of the season as he connected on 16 out of 17 FG attempts and all 28 of his PAT attempts.

Coming into 2021, Dynasty Owners should be wondering whether it’s worth paying Lutz $4.05 million to be their kicker, especially since the signs are there that Brees will retire. In 2020, few made the call not to roster Lutz as he was owned in all but a handful of leagues (95% ownership). The Saints offense wasn’t nearly as good without Brees and that could make Lutz’s second half of the season more representative of what to expect in 2021. If they think so, Dynasty Owners should draft a kicker earlier and find one who might be as productive (or possibly more productive), but cost a lot less salary than Lutz.

Unlike the players who improved over the course of the 2020 season and likely improved their draft position for 2021, the draft prospects vary for these five players who declined over the course of the 2020 season. Some Dynasty Owners may be reluctant to draft them as highly as they were selected in 2020. They may feel like the end of the 2020 season was a signal towards how they will produce in 2021. Others may be willing to “take a chance” in the hopes of landing a stud player ready to rebound later on in their 2021 draft.

What do my fellow Dynasty Owners think about the 2021 draft prospects for these five players? Will Russell Wilson bounce back and start cooking again in 2021 (and will he take Tyler Lockett along for the ride)? Will anyone be drafting Ezekiel Elliott as high in 2021 as he was being drafted last year or have you reassessed after his production dropped in 2020 with the injury to Dak Prescott?

Thanks for reading and hope this article helps you prepare for the 2021 Dynasty Owner season. 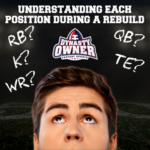 Understanding Each Position During a Rebuild 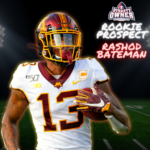