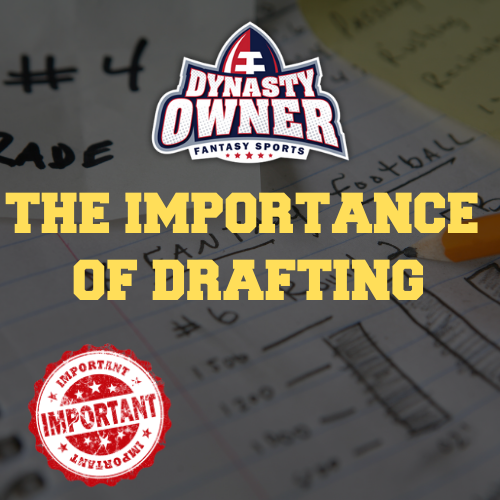 For the past few weeks, these off-season articles on helping to get people ready for their 2021 Dynasty Owner start-up leagues have mainly looked back at the 2020 season. These have included articles on the best players in the regular season and playoffs, players who should be picked in the first round based on their 2020 performance, players to avoid drafting based on their 2020 performance and salaries, second half breakout players and players who faded in the second half of 2020. All of them looked at which players to draft, or not draft, this upcoming season based on last season.

In looking at how the two Chase for the Ring Champions (Eddie Driscoll in 2019 and Viktor Kilgore in 2020) put together their Ring winning teams, it appears that drafting is critically important to Dynasty Owner success. However, there are limits though on just looking back at past performance. Past performance is nice, but is only one part of your overall draft strategy.

There are plenty of ideas on how to construct a winning redraft or “regular” dynasty fantasy football league, but likely none of them can be fully applied to Dynasty Owner because of the inclusion of salaries and the salary cap. Players and analysts can’t even agree on what draft strategy or strategies work in non-Dynasty Owner leagues and with only two years of history, there are no long-standing Dynasty Owner draft strategies that can be evaluated to determine their effectiveness.

For the purposes of this article, all Dynasty Owner fantasy points cited are from the full, 16 game 2020 NFL regular season. Salaries listed are current as of February 21st, 2021.

Our first Chase for the Ring winner Eddie was able to draft the #1 QB (Lamar Jackson), RB (Christian McCaffrey), WR (Michael Thomas) and TE (Travis Kelce) for his team (New York’s Strongest) in his 2019 Dynasty Owner draft. He also traded for Dalvin Cook who finished 2019 as the #6 RB. The 2020 winner Viktor didn’t get all of the top players at each position in his draft, but was pretty close. Here are Viktor’s first six draft picks (in order):

As you can see, Viktor was able to draft the #1 TE (Travis Kelce) in the fourth round and the #1 WR (Davante Adams) in the sixth round. While they weren’t the best players at their position in 2020, his first three picks were solid as well. His first round pick of Patrick Mahomes finished the 2020 season as the #3 overall player, while his second round pick Dalvin Cook finished as the #3 RB and his third round pick Tyreek Hill was the #2 WR. He also picked up James Robinson (the #7 overall RB) off the Free Agent Auction the day before the season started.

Even though each Ring winner had a key player who they acquired outside of the draft, they both put together the starters for their team in their draft. If you draft like Eddie did in 2019 or Viktor did in 2020, you’ll probably be in good position to be the 2021 Ring winner.

The Limits of Relying Only on Past Season Performance

This is not to say that the way to win in 2021 is to just draft the best players from the 2020 season. Past performance is not an automatic indicator of future success. However, Dynasty Owners should still prepare for a 2021 Dynasty Owner draft by looking back at player performance in previous years. It’s a great way to start the draft process, but just recognized that there are limits to only using past performance.

If you just looked at Eddie’s roster from 2019 in preparation for your 2020 Dynasty Owner draft and in the unlikely event that you were able to draft those players in your 2020 Dynasty Owner draft, you wouldn’t have had nearly the same success. Both McCaffrey and Thomas missed a significant portion of the 2020 season, while Jackson’s scoring dropped significantly from 515.7 Dynasty Owner fantasy points in 2019 to 399.9 points in 2020. Only Kelce was able to improve on his top ranked 2019 performance in 2020 (314.8 Dynasty Owner fantasy points in 2020 versus 253.3 points in 2019). A team with Jackson, McCaffrey, Thomas and Kelce would have been good in 2020, but not a Ring winner team.

And for Dynasty Owner purposes, we haven’t even touched on salaries yet, which could make a second half surge seem even better or a second half fade even worse. Deciding that you want to draft David Montgomery based on his improved performance in the second half of the 2020 season is great, but seeing that he’s scheduled to make “only” slightly over $1 million in 2021 makes him even more valuable in Dynasty Owner than other dynasty leagues. On the other hand, Ezekiel Elliott’s decline in performance after Dak Prescott’s season ending injury in Week 5 is a potential warning sign, but his lengthy contract and $15 million annual salary makes it worse if Dynasty Owners draft him and he doesn’t rebound in 2021.

What’s the Best Strategy for Drafting a Winning Team?

There are many ways to construct a winning fantasy football team. For every league with 10 teams, there are going to be 10 different draft and team management strategies. For 12 team leagues, there are 12 different strategies, and so on. It’s not just regular fantasy players though, even fantasy football experts don’t agree on draft strategy. For example, this analyst tells you to not draft waste an early draft pick on a tight end:

“Waiting to draft the tight end position is something that I have done every year and have had solid success with.”

While this analyst contends that grabbing an elite TE is the key to victory:

“Elite tight ends are difference-makers, so it’s perfectly fine to draft a George Kittle or Travis Kelce in Rounds 2-3, depending on your format.”

Those two opinions came from different analysts and represent pretty much opposite viewpoints on the value of when to draft a TE.

It’s not just analysts who disagree. There are other strategies that appear to fall in and out of favor depending on the year. A fantasy analyst can change his mind from season to season, as evidenced by these two headlines from the same analyst from a major newspaper at roughly the same point in the past two seasons:

How to win your fantasy football draft using the Zero RB strategy – August 19, 2019

Somehow the Zero RB strategy was a way to win in 2019, but not in 2020. Not sure what changed so dramatically in the fantasy football landscape between those two seasons to make Zero RB fall out of favor.

Fantasy football analysts and players alike appear to disagree on exactly how to construct your fantasy team through the draft, but everyone should agree on the importance of having a good draft.

Because Dynasty Owner is new and different than other fantasy football leagues and only has two years of history, there aren’t a lot of competing strategies out there on how to construct your Dynasty Owner team. In 2019, I put together a list of a few draft tips to help with the inaugural season of Dynasty Owner in 2019 (https://9jn.41d.myftpupload.com/2019/07/dynasty-owner-draft-tips/) and then revised them last year (https://9jn.41d.myftpupload.com/2020/05/draft-tips-2020/). They are largely the same but with some differences as Dynasty Owner has evolved over the past two seasons and the draft tips needed to evolve as well. What they aren’t yet is tested to see if they have worked. The good news is that the data exists to test those tips (and any others out there) and see if they in fact worked to help Dynasty Owners win in 2020 so Dynasty Owners drafting new teams can utilize them in 2021.

To win the Chase for the Ring in 2021 (or just your Dynasty Owner league), you’re going to have to draft well. It’s not likely that a Dynasty Owner team can survive on trading and Free Agent Auction pickups alone. While it might not be realistic to draft all of the top players at QB, RB, WR and TE like Eddie did in 2019, or even to grab five of the top 25 scoring players in the first six rounds of your Dynasty Owner draft like Viktor did last year, a good draft will go a long way towards lining your team up for success.

In order to draft well, everyone who wants to win needs to have a solid draft strategy. There’s no consensus on exactly how to construct a winning fantasy football team in “regular” fantasy football leagues that have been around for years, so it’s unlikely that there is a magic formula for Dynasty Owner at this early stage in our game’s history.

There might not be a single way to win in Dynasty Owner. In future weeks, we will dive into some data from the 2020 season to discover if there are any strategies or ideas recommended that worked last year. We will look at how 2020 Dynasty Owner league winners as well as those who finished in the Top 25 of the Chase for the Ring (the best of the best Dynasty Owner teams) drafted their teams. These data may uncover a strategy that you can use to win your league, or even the Ring, in 2021.

As mentioned earlier, there are 12 draft strategies in every Dynasty Owner league. What’s your strategy? Maybe there’s a way to look at the 2020 draft data and see if your strategy was effective last year and should be utilized again in 2020. Send out some of your ideas for Dynasty Owner draft strategies to examine in the future to me on Twitter (@SteveVT33) or post them in the comment section on YouTube.

My articles and videos on getting you ready for your 2021 Dynasty Owner start-up league team will be out weekly throughout the off-season. Keep an eye out for new articles and videos from the rest of our team of Dynasty Owners writers as well. On Mondays, Nate Christian (@NateNFL) will break down rookies in his Prospect Preview. Matt Morrison – The Jerk (@Dynastyjerk) is back for another year and will do a deep dive into contracts on Wednesdays. Jay Pounds (@JayPoundsNFL) has his articles and videos on how to rebuild your Dynasty Owner roster on Thursdays. Read all of their articles, watch and like all of their videos on YouTube (and all of the other available formats, such as Spotify) and follow the four of us plus Dynasty Owner (@Dynasty_Owner) on Twitter. Thanks to everyone for following, reading and watching!