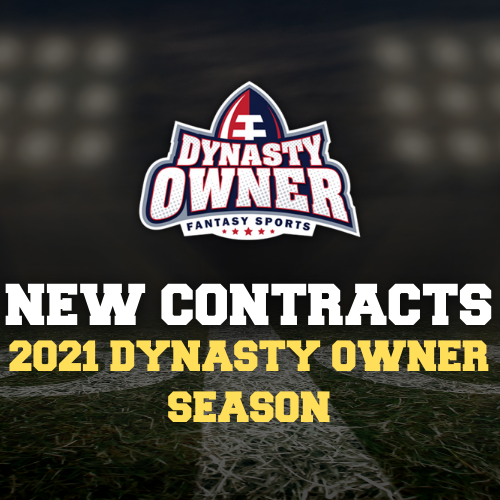 There has been a lot of change over the past couple of days in both the NFL and, more importantly, Dynasty Owner. The new league year has started for both with new salaries taking effect for lots of players. The changes in Dynasty Owner aren’t as dramatic as in the NFL since a lot of the activity since Monday has been teams signing defensive players and offensive lineman to huge new contracts. The top 12 contracts signed since Monday in terms of Average Annual Value (AAV), which is what Dynasty Owner uses as the player’s salary, are defensive players or offensive linemen. Out of all of the new contracts signed in free agency so far, only five players on Dynasty Owner rosters have been for more than $10 million annually.

In addition to these signings over the past few days, there were plenty of new contracts and contract extensions signed prior to Monday. Patrick Mahomes’ $45 million annual salary contract was signed back in July, but he only counted $4.1 million against the Dynasty Owner salary cap last year. It was not until the 2021 Dynasty Owner league year started on Thursday, March 18th that his contract was updated. Several top RBs got new contracts in early September, while there were also a few contracts signed during the season. Still more top players (Dak Prescott and Aaron Jones) re-signed with their current team before the start of Free Agency on Monday.

That’s a lot to process. If you haven’t been following all of those signings, this article is for you.

All position ranking data listed are from the 2020 Dynasty Owner season. Updated 2021 salaries are currently posted on the Dynasty Owner website based on data from Spotrac (www.spotrac.com). All contract ranking data were accurate as of the morning of March 19th and taken from Spotrac using their Average Salaries Ranking page (https://www.spotrac.com/nfl/rankings/average/), then sorted by position.

Catching a $10 Million Plus Contract

Tight ends and wide receivers have been catching some of the big money being tossed around by NFL owners this off-season. All five of the players who could be on your Dynasty Owner roster, have switched teams so far this off-season, and will make over $10 million next year are either WRs or TEs. Here are the players who caught a big contract:

In contrast to the big contracts that have been given out to some of the top WRs and TEs, there has only been one $10 million or higher free agent RB signings so far this off-season (Aaron Jones with the Packers for $12 million per year). All of the big name RBs got paid last year, but their new salaries aren’t kicking in for Dynasty Owner purposes until 2021. So, Dynasty Owners with Christian McCaffrey (just over $16 million), Alvin Kamara ($15 million), Dalvin Cook ($12.6 million), Derrick Henry ($12.5 million) and Joe Mixon ($12 million) are trying to figure out how to fit those players on their rosters at their new salaries. In addition to those big name RBs who got paid, many other RBs will have new contracts in 2021:

The rest of the new RB contracts are $3 million or less for veterans who are most likely backups for their new teams and handcuff options for Dynasty Owners. These players include:

The new QB salaries for 2021 that we know of right now fall into two basic categories: Young players making big money (Patrick Mahomes, Dak Prescott and Deshaun Watson) and older players getting one year deals (Taysom Hill, Andy Dalton, Ryan Fitzpatrick and Cam Newton). While it is true that other QBs have signed deals, let’s not focus on QBs like Mitchell Trubisky, Jacoby Brissett or Tyrod Taylor right now.

The three young players who will now be making big money are:

In contrast, we have four older players who all signed one-year deals over the past few days:

A few other QBs have signed one year deals with new teams as well, but in backup roles. Mitchell Trubisky ($2.5 million) isn’t supplanting Josh Allen as the Bills QB, and Jacoby Brissett ($5 million) is highly unlikely to take over for Tau Tagovailoa in Miami. Both also took pay cuts of several million dollars ($10 million for Brissett and $4.76 million for Trubisky). Mike Glennon also signed a new deal with the New York Giants for $1.35 million, presumably to back up Daniel Jones, but will be making $162,500 more than he did last year in Jacksonville. Hopefully, the 20% of Dynasty Owners with Glennon still on their rosters will be able to afford that increase when it takes effect.

Finally, this article wouldn’t be complete if we didn’t talk about everybody’s favorite position – kicker. Even if you have one of these guys on your Dynasty Owner roster, you may not have noticed the news about his new contract with the millions of dollars being handed out to players at other positions. As a public service, here are some of the new kicker contracts taking effect for the 2021 Dynasty Owner season.

Some Dynasty Owners who are really following things might be wondering why last year’s #1 kicker Jason Sanders isn’t listed here. It’s time to rejoice for everyone who owns Sanders in Dynasty Owner. His 5-year, $22 million extension ($4.4 million annually for Dynasty Owner purposes) doesn’t kick in until the 2022 Dynasty Owner season, so he’ll continue to only set your team back $637,800 this year.

Now that the 2021 NFL and Dynasty Owner league years have started, there are a lot of new contracts for Dynasty Owners to keep up with and even more are likely in the coming days as well. These new contracts are as large as $45 million per year for 10 years for Kansas City QB Patrick Mahomes down to less than $1 million per year for Atlanta kicker Younghoe Koo. Mahomes’ contract went up by almost $41 million and DeShaun Watson will be making over $35 million more this year, while others, like David Johnson and Kenyan Drake, took pay cuts. It’s a lot to process if you have a single Dynasty Owner team and harder if you have multiple teams like many people do. Hopefully this article will help all Dynasty Owners keep track.

How’s your Dynasty Owner team doing with all of the new contracts? Let everyone know how your salary cap is looking by reaching out to me on Twitter (@SteveVT33) or post what your updated 2021 salary cap figure is in the comment section of the video on YouTube.

The importance of these new contracts and to try and help all Dynasty Owners get ready for the 2021 season meant a hiatus from my usual Friday off-season articles and videos on getting you ready for your 2021 Dynasty Owner start-up league team. Those will be back again after the contract signings cool off and before those start-up drafts begin in May.

Thanks to everyone for following, reading and watching!  Good luck in the new league year!