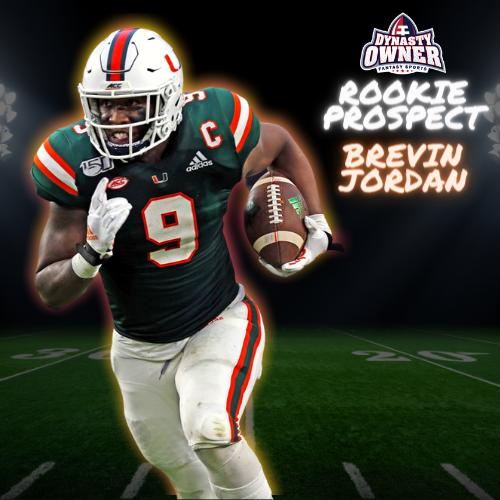 The #1 Tight End of the 2018 HS Recruiting Class (above Kyle Pitts and Pat Freiermuth), Jordan had a productive career at University of Miami and was known for his playmaking ability. One of the best tight ends in the nation after the catch, Jordan carried a more-than-healthy 15.2 yards per catch average in his Junior season. Another athletic freak at the position, he’s currently flying under the radar as everyone raves about Pitts, but how much farther behind is Jordan? It’s closer than you think.

Miami’s offense over the past couple years has struggled, but nonetheless Jordan was productive. Posting 30+ catches in each of his three years, his YPR increased each year as well, showing his improvement in getting down the field, both before and after the catch. He totaled 38 receptions through eight games in 2020 for 576 yards and 7 touchdowns. When on the field he was always one of the top threats and going into the 2020 season was in competition with Kyle Pitts as the TE1 for the 2021 Draft Class. While Pitts took the national spotlight, Jordan had a strong Junior season and is now entering the NFL Draft.

Brevin Jordan is another guy that is expected to test off the charts. Jordan ran a 4.79 40-Yard Dash in high school and I expect him to crush that number at his Pro Day. He also excelled with the 20-Yard Shuttle and other agility drills, and I expect that to show once again. It’s a real shame that we don’t have a combine this year as there are so many impressive athletes in this class and some records very well would have been broken.

As one of the consensus Top 3 tight ends in the 2021 Draft Class, Jordan will likely be a second round pick come draft day. Whether he’s drafted before or after Freiermuth, it won’t matter much as they will likely be drafted within a couple slots of each other. With that draft capital his contract will likely look similar to Cole Kmet’s ($1,722,222). Kmet signed a 4-year deal worth $7,577,778 which gave him an average yearly salary of $1,894,445.

There are plenty of teams in this year’s NFL Draft that could use an athletic young tight end. One of the top one’s that would be a perfect fit for Jordan would be the Jacksonville Jaguars at pick 45. The Jaguars have a lack of talent at tight end and pairing a top talent like Jordan with Trevor Lawerence of course brings up some exciting possibilities. Lawerence already has some good wide receivers to throw to, but if the Jaguars want to surround him with the best talents in that offense, Jordan makes so much sense for Urban Meyer and the rest of the coaching staff.

There’s a team picking after the Jaguars in the second round that could also use a young athletic tight end. It’s probably one of the best landing spots possible for Jordan, as he would be catching passes from one of the best young quarterbacks in the league. Kyler Murray ($9,763,721), and the Arizona Cardinals would be a match made in heaven for an athletic, play-making tight end like Jordan. Kliff Kingsbury would be able to use Jordan all over the field and create matchups that would win them big plays underneath and down the middle of the field. With either one of these landing spots, matching up Jordan with a young quarterback gives him all the upside in the world for your dynasty teams.