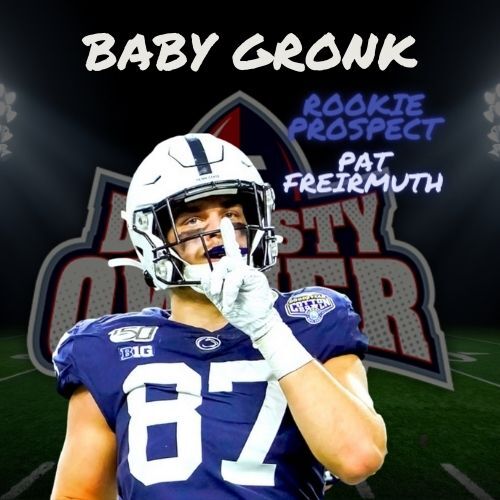 If you are an NFL GM who needs a do-it-all tight end to slide into your offense, congratulations on the easiest second round pick you’ve ever signed off on. Pat Freiermuth has been nicknamed “Baby Gronk”, and while comparing anybody to one of the greatest tight ends ever is a stretch, we can see similar traits once the film comes on.

In 2020, Freiermuth only played four games before suffering a shoulder injury, but in those four games he caught 23 passes for 310 yards and a touchdown. In a weird year for the BIG 10, these statistics were enough for him to win the 2020 BIG 10 Tight End of the Year award. In his first two years at Penn State, Freiermuth caught 69 passes (nice) for 875 yards and 15 touchdowns. He ended his career with some school records for the position, eclipsing some of Mike Gesicki’s ($2,103,794), such as total career TDs by a tight end.

As mentioned prior, Freiermuth decided not to run during the Penn State Pro Day, but he did mention that he would likely run for scouts sometime in April before the draft. If he does hold a little pro day for himself I will certainly be watching for the numbers that come out of it. Reports are that Freiermuth ran a 4.72 a year or so ago and if he can get the number in the 4.6’s I think he’ll make some noise, but I’m looking forward to any agility drills that he runs. I want to see if he’s improved on his lateral ability since starting his training.

I feel very comfortable slotting Freiermuth into the 2nd round of the NFL Draft. He’s a great prospect for the NFL and could have been a first rounder in this year’s draft if it wasn’t for a shoulder injury costing him half the season. Some team will be very lucky to grab him Day 2 and he’ll probably have similar draft capital to Cole Kmet ($1,722,222) who was drafted at the #43 overall slot last year. Kmet’s rookie contract was for $7,577,778 over 4 years giving him a APY of $1,894,445.

As I stated earlier in this article I believe that Freiermuth is overall pretty “landing-spot proof”, meaning he can play in any scheme and will see snaps early on. One of the best landing spots for him to make an impact right away, not only for his NFL team but also for your fantasy team, is the Indianapolis Colts. Trey Burton is a free agent, Jack Doyle ($5,787,500) is a possible cut candidate, and Mo Allie-Cox ($3,384,000) is on a one-year deal. The depth chart is pretty wide open and now with Carson Wentz ($20,400,000) under center, we’ve seen what he can do with a good tight end, Freiermuth just seems like the perfect fit here. The Colts have a pick at #54 overall and I would not be surprised to see them run to the podium if Freiermuth is still around.

Another landing spot that may not be as obvious is the New York Jets. Robert Salah has made his way over from the 49ers and we all know the tight end situation over there. Chris Herndon ($2,350,381) is in the last year of his contract and has not impressed since his rookie year, Freiermuth would immediately take over the starting role and not only help out whatever quarterback is throwing the ball, but would solidify the offensive line so that Salah can work to establish the run game in New York. This just seems like another great fit, and at pick #34 overall, Freiermuth will likely be sitting somewhere near the top of the Jets’ draft board.