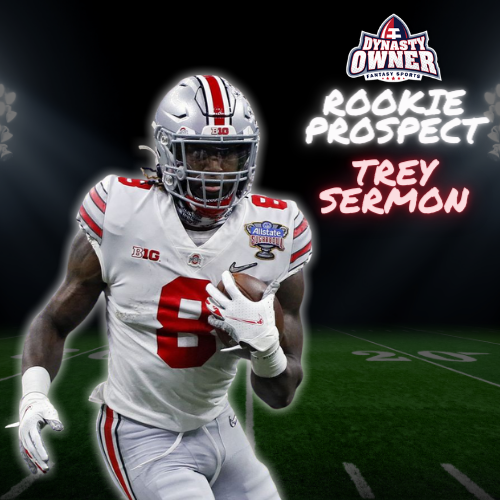 A tale of two tapes, Trey Sermon ended his college career on a high note with an incredible spell at running back for Ohio State, but when you look back at the film from Oklahoma he looks like a different player. Which Trey Sermon are we likely to get in the NFL? We might not truly know until game day, but we can dive into the tape and do our best to pick out the positives and negatives of Sermon’s prospect profile.

Over Sermon’s four-year college career he was able to amass 2,946 yards on the ground, the first 2,076 coming while he was at Oklahoma and the last 870 coming in 2020 at Ohio State. He had his most productive year at Oklahoma in 2018 when he ran for 947 yards and scored 13 touchdowns, at 5.8 yards per carry. In 2020, at Ohio State he just about matched that career-high, but on 48 less carries, touting an improved 7.5 yards per carry. Is Sermon the plodder that we saw at Oklahoma in 2018, or is he the dynamic playmaker out of the backfield that we saw in the College Playoffs? I’m betting on the latter.

Sermon has a Pro Day slated for March 30th, and I’m looking forward to seeing his numbers. There’s a big to-do right now about what numbers are accurate and which ones need to be modified, but at the end of the day I’m looking at the class as a whole. As long as we’re comparing Pro Days to Pro Days, I’m not too concerned. I would expect Sermon to run in the low 4.6 time with a chance to be in the high 4.5’s. His game does not rely on speed, but rather quick bursts and good agility to slice through defenses.

Come time for the NFL Draft, I think Trey Sermon will likely be an early-Day 3 pick, but has the chance to sneak into the 3rd round if a team falls in love with his running style. His college production and injury history brings enough question marks that he’ll be behind at least five or six other running backs in the draft, but it only takes one team to fall in love with him. If he goes early in the 4th round, similar to Josh Kelley ($975,085), he could be looking at a 4-year contract worth a total of about four million dollars. At about a million dollars a year, Sermon could be a great value in rookie drafts.

My favorite fit for Trey Sermon was, up until Chris Carson ($2,500,000) re-signed, the Seattle Seahawks. Yes, I know the backfield there was already messy, but Sermon just seemed a good fit for the offensive scheme (possibly because my pro comp for Sermon is, in fact, Carson). I kept this in here, because Carson is only signed for two years, and does not carry a large dead cap hit in 2022. On the off-chance that Sermon is drafted to the Seahawks, I think he could be a great stash if you’re looking past 2021.

The Atlanta Falcons and new head coach Arthur Smith would likely love a player like Trey Sermon. First of all he’s inexpensive (early-Day 3), but also he would thrive in their zone-blocking scheme. Sermon has the ability to be a power back in between the tackles, but also offers enough burst to break off big plays off the end of the offensive line. Outside of the run game, his receiving abilities increased throughout his college career, and he would be able to protect the aging Matt Ryan ($26,912,500) immediately on passing downs.