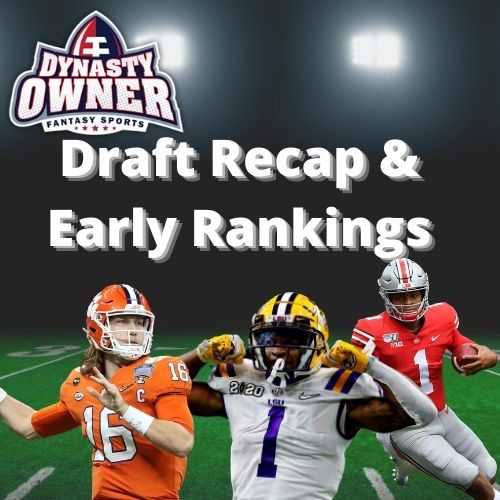 The 2021 NFL Draft has come and gone. On a night where a lot of trades and movement was expected, there was very little. In total, there were 10 picks that traded hands in the first round. As we know, some of the biggest ones occurred prior to draft day: (49ers trade for example). Before I get into a sneak peek of my early rookie rankings, let me give you all a summary of some of the biggest trades of the draft and what it means in terms of salary implications.

As I previously mentioned, the 49ers had (in my opinion) the most impactful trade of the draft. Here is how it shook out…

The San Francisco 49ers traded a 2021 1st (12th overall), a 2022 1st, a 2022 3rd and a 2023 1st for the Dolphins’ 2021 1st (3rd overall). This trade happened weeks ago and there is no breaking news on the trade itself, but the 49ers did what most expected them to do. They converted that 3rd overall pick into Trey Lance. Lance will make a little over $8.5 million per year for four years. This pick made the most sense for the 49ers, and it is one that was quite predictable. Lance is, in my opinion, the most intelligent rookie quarterback in this class. This should allow him to transition into a starting NFL quarterback sooner rather than later. Trey Lance is currently my QB2 in rookie rankings.

Every trade has two sides to it, so let’s see how the other end of the 49ers’ deal shaped up. The Dolphins received the 12th overall pick from the 49ers and used it (among other picks) to move up to the 6th overall. This deal was made with the Eagles, and it ensured that the Dolphins were going to get a rookie wide receiver. The receiver is Jaylen Waddle. Waddle was my rookie WR1 coming into the draft and this landing spot changes nothing. He will be my WR1 when my initial rookie ranks are released. A $6,771,497 salary is a lot of pay for an unproven wide receiver, but he will still be a value at that number.

One of the more shocking trades of Day 1 was the Bears trading up for the NY Giants’ 11th overall pick. They obtained the spot by giving up a 2021 1st (they converted that pick into Kadarius Toney, a pick I like quite a bit), a 2021 5th, a 2022 1st and a 2022 4th. This was a trove of picks to give up to move up nine spots, but once the trade was made, the player they picked made a lot of sense. The Bears drafted Justin Fields at #11 overall. Fields was the fourth quarterback taken in the draft. He looks to immediately move in as a contender for the starting job. Fields will make a little over $4.7 million per year. As always, if this rookie quarterback can start and be at least average, he will retain amazing value for the duration of his contract.

Moving onto the later rounds:

The Broncos traded up from #40 overall to #35 overall in order to draft the future leader of their backfield, Javonte Williams. Williams (North Carolina) is currently my RB2 in the rookie rankings. I have him ranked only behind Najee Harris. Williams will have to compete with Melvin Gordon in the short term, but I see this backfield becoming his in less than two years. It is also worth noting that Williams costs 1 million dollars less than Harris and Travis Etienne per year.

The Green Bay Packers finally selected a pass catcher for Aaron Rodgers (assuming Rodgers is the starting quarterback in GB for the 2021 season).

When is the last time the Packers drafted a wide receiver in the third round or higher? While you may have guessed Davante Adams, the correct answer is Ty Montgomery in 2015. It’s unbelievable that Rodgers has not received a top round wide receiver since then.

At any rate, the Packers traded up a handful of spots to get Amari Rodgers. Rodgers should receive playing time almost immediately, especially if he is able to pick up the offense quickly in training camps and preseason games. Rodgers will cost Dynasty Owners right at $1.225 million for four years. This was one of my favorite draft trades.

These were obviously not all of the draft trades that affected Dynasty Owners, but I wanted to mention these trades as they are the ones that stood out to me.

At this point I’m going to leave you with the Top 5 ranked rookies for quarterbacks, running backs and wide receivers. Obviously, these have the player’s salary taken into consideration. Look for my full overall rankings and rookie rankings to be released later this month.

I want to thank everyone for reading. Next week, I will have a video for you as we get back to Speculation and Breakdown on teams. Take care and be safe.