Day 2 of the NFL Draft is possibly the most exciting of the days for fantasy football players. Usually, a good chunk of the players that we look at year in and year out, are selected during the second and third rounds of the NFL Draft. This year it was a bit more sparse then in the past, but there is still plenty to be excited about! Here are a few I’m looking forward to watching closely.

Move over Jamison Crowder ($9.5 million), the Jets have a new slot receiver in town. Moore is a bit faster, a bit shiftier, and overall a more electric playmaker than Crowder and it should benefit that entire offense immediately. He’s likely to see a lot of screens and sweeps, just as he did in college, as the Jets manufacture some easy completions for both of their rookies. Moore has a lot of upside in Dynasty Owner.

One of the sneakiest landing spots for a running back, I believe this to be a very exciting fit. Javonte has the build to be a three down back, and the Broncos are likely to give him that value as soon as Melvin Gordon ($8 million) starts showing his age (which won’t be long). Javonte will thrive in this offense and be a great fantasy asset by next offseason when he has no competition for the lead role.

We worried about how Moore would fit into the NFL, well now Kliff Kingsbury is his coach, and we should no longer be worried. Moore will get his touches, and we already know that he will be efficient with those touches. The potential of Moore working in the middle of the field while DeAndre Hopkins ($27.25 million) works the outside should excite everybody.

This one is a bit of stash, Eric Ebron ($6 million) will likely continue his role with the Steelers offense, but Freiermuth will get on the field plenty as the number one blocking TE. His fantasy upside will be limited his first season, but Ebron is out after this season and Freiermuth is a guy who has a lot of upside for his ability to always be on the field.

Many were disappointed that Marshall didn’t go in the first round, a supposed medical red flag brought his draft stock down at the final moment, but I wouldn’t be too worried. Now he gets to team back up with his offensive coordinator in college, Joe Brady, and we’ve already seen the Panthers sustain a trio of fantasy relevant receivers. Marshall is one of the top receivers in this class for both landing spot and talent.

Palmer’s name was not a familiar one in the weeks leading up to the draft, but those who paid attention at the Senior Bowl knew that something was up. Palmer constantly impressed coaches and scouts during the practices and looked good during the game. He’s a big-bodied receiver who has made contested catches but also is a really good route runner. The draft capital combined with Justin Herbert’s breakout and Mike Williams ($15.68 million) in a contract year, make him a great Dynasty Owner asset.

The Packers finally drafted a wide receiver! A little later than I expected, and not really the guy I expected, but we’ll work with what we’ve been given. Rodgers is immediately the best slot receiver on the team and should have no trouble seeing snaps for the Packers. He’s not likely to slide right into the WR2 role on the team though, so keep an ear close to the ground during training camp.

Possibly the best landing spot, the 49ers don’t usually spend draft capital on a running back. For Shanahan to make the selection here, it gives me hope that Sermon is set to be a workhorse. It’s currently a crowded backfield but it’s not one that is chock full of talent. If Sermon can stay healthy I think he can quickly become the best back for this team, and he’ll be a threat on any week to thrive in that offense.

I wasn’t the biggest fan of Collins heading into the draft, but this landing spot caught my attention. Collins has the size and the speed to dominate in the NFL, but we just never saw it in college. There was a ton of terrible quarterback play at Michigan during his time, and the entire team consistently underwhelmed, but Collins had some nice flashes. He’s likely to be the starting X receiver for the Texans from the start, and the biggest question surrounding his fantasy value is, who will start under center for Houston in Week 1? 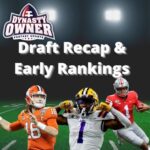 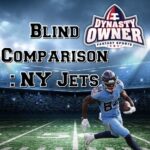 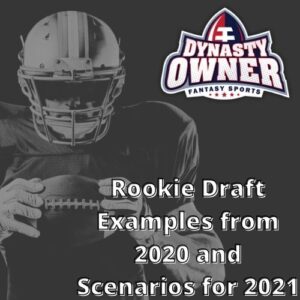 Rookie Draft Examples from 2020 and Scenarios for 2021 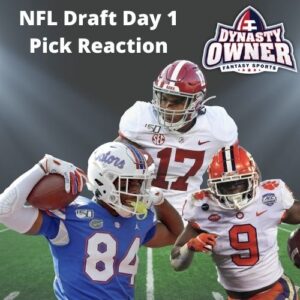