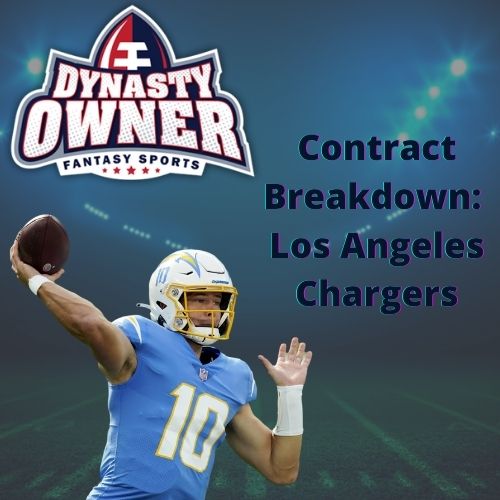 I hope everyone enjoyed my last article series where I discussed some hybrid blind player comparisons.  As I mentioned, I will continue to sprinkle in some comparisons as the off-season rolls on, but I want to shift gears a little bit.  In the next four articles, I will release some mid off-season rankings for each position.  For each position, I will give my Top 10 Dynasty Owner players and break down some of them.  Hopefully this will start to get everyone’s mind shifted towards the start-up drafts that will be taking place over the next few months.  Without further ado, here we go…

In keeping with my “team theme”, I will be highlighting the AFC West.  More specifically, the Los Angeles Chargers today.  The Chargers finished the 2020 season with a 7-9 record.  Here is a snippet of something I wrote about the Chargers’ 2020 season at the end of the regular season last year.  “Aside from last week, the Chargers have been very good at keeping games close.  In ten of their twelve games played, they have won or been within one score.  They do not get blown out very often.”  I wrote this after Week 13, and it is a true stat.  While the Chargers’ season did not go the way that head coach Anthony Lynn would have liked, they were competitive, and they largely stayed in games.  This semi-success comes on the heels of Justin Herbert’s rookie success.  Herbert also had to operate without his top running back for five games in the middle of the season.  Austin Ekeler injured his hamstring in Week 4 and had to be carted off the field.  The injury resulted in five full games missed, and that obviously did not help the Chargers’ chances at reaching the post-season.  All in all, this is how the AFC West finished…

This is just a reminder for all of you that may have forgotten how the division concluded.  Not many surprises here as the Chiefs once again dominated their division.  Here is a trivia question…When was the last time the Chiefs did not finish first in their division?  I’ll reveal the answer at the end of the article, but for now, let’s talk about some Top 10 quarterbacks.

I want everyone to keep in mind that these rankings take into account a player’s career as it relates to Dynasty Owner.  Likewise, salary plays a large role in these rankings.  For that reason, my Top 10 players for every list will not be the “best” players for their positions, and they won’t be the players that are going to score the most fantasy points on the season.  What this list is attempting to do is show you the top value players at their positions.  These are efficiency rankings.  They are value rankings.  No one, including me, is going to predict that Joe Burrow will finish the 2021 season with more fantasy points than Patrick Mahomes.  That is just something that will not happen without an injury.  But you better believe that Burrow carries more value than Mahomes, and he will therefore be ranked higher.

It’s no coincidence that I picked the Chargers for my quarterback rankings article.  It makes perfect sense when you see that Justin Herbert comes in as my number one quarterback.  Herbert finished the 2020 season as QB9 despite the fact that he did not play in the first game of the season.  Herbert is projected to finish as QB5 in the 2021 season.  This combined with his cheap salary for a quarterback with three years left…well, that makes him my top quarterback to own in Dynasty Owner.  This actually matches up with the early mock draft stats.  Herbert’s current ADP is 4.1 and that leads all quarterbacks.  Yes, I know it’s early in the mock draft season, but I don’t expect he will get knocked off of that top spot.  Take Herbert with confidence as your number one quarterback.  It may even be worth drafting him number one overall.

Kyler Murray is a close second to Herbert, but I couldn’t get over the fact that Murray has one less year remaining on his rookie contract.  He is also making two million dollars more than Herbert per year.  For these reasons, (and these reasons alone) I have Murray in second.  That being said, I do believe that Murray will outscore Herbert in 2021.

Kyler is at least one tier above Joe Burrow in terms of a fantasy producing quarterback.  For that reason, Burrow ranks lower.  Yes, I know I just made the argument about an additional year on a contract and how valuable that is, but at some point there is a line that needs to be drawn on raw production.  Odds are that Murray will outscore both Burrow and Herbert, but I believe Herbert will have an easier time overcoming that short term value.  At any rate, QB3 is not a bad landing spot at all for a quarterback that we have only seen play 10 NFL games.

Josh Allen is a tough case.  He and Patrick Mahomes were the two players I struggled with ranking the most.  Allen’s issue is not with his current contract.  There is no doubt in my mind that he will be the most valuable quarterback in the 2021 season.  He looks to repeat as a Top 3 fantasy point scorer on a contract worth a little over 5 million dollars.  That my friends is the Holy Grail of Dynasty Owner.  He will win a lot of people’s championships in this upcoming season (barring injury of course).  That being said, his money is coming, and it’s coming in 2022.  Here is what I predict will happen with Allen.  We already know that Buffalo exercised Allen’s fifth year option.  That is a $23 million option and that would roughly be Allen’s cap hit in 2022 if nothing else happens.  I find that unlikely though.  The general consensus is that this 5th year option is just a placeholder for a long term, big money ($40 million +) contract.  I also believe this is true.  With that in mind, there was no way that I could bring myself to rank Allen higher than fourth.  Yes, he should have a great 2021 season.  Hell, he may even finish as the QB1 at the end of the season, but his long term value will take a massive hit when/if he receives a $40 million contract.  His hit will be very similar to the one that Mahomes took this year.

Trevor Lawrence makes the list at QB5 as the only quarterback in the Top 10 that has yet to throw an NFL pass.  I, like many, believe he is the future of the Jaguars organization and a cheap, four year contract will provide immense value.

Jalen Hurts ranks two spots ahead of Tua for a couple of reasons.  First, his contract is one-fifth of Tua’s deal.  Tua would need to provide quite a bit more than Hurts for the two to flip each other.  This leads me to my second point…Hurts was more productive on a per game basis in 2020, and he almost produced more fantasy points than Tua despite being the lead quarterback in four less games.  Hurts belongs above Tua, and the early ADP reflects that.  (Hurts – 44.5, Tua – 60.3)

Sandwiched in between Hurts and Tua is one of my favorite NFL quarterbacks, Russell Wilson.  Russ had a fantastic 2020 season where he finished as QB5.  While he statistically wasn’t the quarterback with the most value, he did lead many Owners to a championship.  I did a blind comparison last year of Russ and Mahomes with some very interesting results.  Let me share an excerpt from that article…

“My point is that next year (after Mahomes is no longer 4.1 million a year to own), he and Wilson should be much closer in ADP, if not back to back.  This means that Mahomes’ ADP of 2 this year is mainly for this year.  Let me ask this a different way…If Mahomes’ contract was 45 million this year, where would you have drafted him?  My honest answer is QB 11 or around 75 overall and right before Wilson.  This is the reason I am so much lower on Mahomes’ than almost everyone I have talked to.  I understand how important this year is.  I understand the “win now” mentality and if you have Mahomes for 4.1 million, you have a great chance to win, but I can’t justify taking a 45 million dollar QB next year first or second overall.  I like Mahomes.  Scratch that.  I love Mahomes, but there is no value (Dynasty Owner wise) to take him in the first half of the first round.”

This was written prior to many Dynasty Owner drafts, and I think it holds up.  I saw and heard of many people drafting Mahomes not only in the first half of the first round, but some were taking him number one overall.  There was just going to be no value in that pick.  And as it turns out, I am ranking Russ ahead of Mahomes this year solely for the $10 million savings.  Mahomes’ 2020 transition into 2021 directly foreshadows Josh Allen’s 2021 transition into 2022.  This is the same scenario.

Mahomes being at an ADP of 2.0 was way too high.  Likewise, Josh Allen in 2021 being drafted at an ADP of 5.1 is way too high.  I understand the win now mentality, but taking either of these players at those positions is not only hamstringing your organization cap space wise, but it is also using an extremely high draft pick on a player that will have low value the following year.

The final player in the Top 10 is Lamar Jackson.  Jackson has fallen tremendously since 2020, and the reason is two-fold.  First, he only has a single year left on his rookie contract, and he looks to make well over $30 million himself.  Second, is the fact that he had a very disappointing season.  He finished as QB11 in Dynasty Owner.  That is just not acceptable if you drafted him number one overall like I would have.  Don’t get me wrong.  I would love to own Jackson especially for this year, but don’t overpay or overdraft him in 2021.  If you thought his value dropped from 2020 to 2021, just wait until he’s making 15x his salary in 2022.

Well, that is it.  That wraps up the first article of this series.  I thank everyone for sticking with me, and I’ll urge you to look out for the YouTube video that pairs with this article.  As always, thank you for reading.  Take care and be safe.