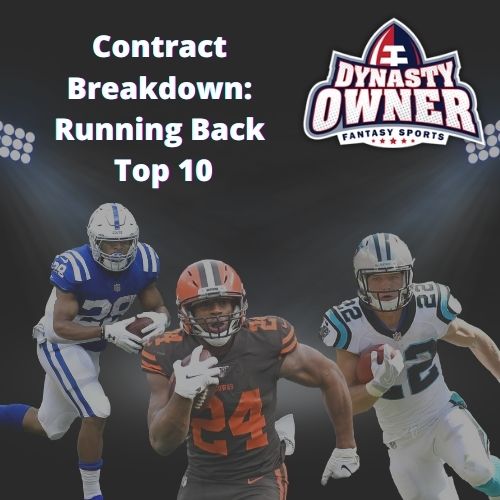 The breakdowns continue as the rookie drafts conclude.  Dynasty Owner rookie drafts started more than a week ago, and the majority of them have finished.  The three Dynasty Owner leagues that I am in all finished between June 8 – 10.  One thing you don’t hear me talk about much are rookies and more specifically, rookie breakdowns.  I usually defer those conversations to Jay and Steve, but today I want to briefly touch on an observation that I made while navigating my own rookie drafts.  Full disclosure on my drafts…I didn’t have many picks and that was by design.  I tend to trade my rookie picks (the unknown) for established players (the known).  I have been doing this in my dynasty leagues for years, and this Dynasty Owner year was no exception.  Without boring you all with the details of my exact picks, I wanted to highlight something that I noticed as I took my only rookie pick in my Beta League.  The observation is this…

The fastest running back and wide receiver from the 2021 class are ranked considerably lower this year than in years past.  Let me break it down…

*There was no NFL Combine in 2021 due to COVID.  Most stats are from teams pro days

So, what can we gather from this chart?  The main thing I see is the fact that 2021 is an extreme outlier.  All seven of the fastest running back and wide receivers between 2018 and 2020 would have been overwhelmingly drafted in Dynasty Owner rookie drafts.  Not only that, but most of the seven would have been Top 20 picks for their year as well.  (Hines, Chark, Hill, Campbell, Taylor and Ruggs would have for sure been Top 20).  So, the question remains…why are Nwangwu and Schwartz going undrafted in many leagues, or at the very least, why are they falling to the end of the third round?  The answer is nuanced, but it also makes sense.  The obvious answer for Nwangwu is the fact that he was drafted by the Minnesota Vikings and will have a very tough road to meaningful running back carries.  It’s also concerning that he finished third among Iowa St. running backs in terms of carries and rushing yards in 2020.  The point can be made…”if he wasn’t even close to the best running back on his college team, then why would I waste a valuable pick on him?”  I don’t disagree with that logic, and I didn’t draft him in any league.  However, you have to admit that his speed is intriguing.  Nwangwu is owned in only 18.8% of leagues at the time of this writing.  Like I said, I don’t anticipate he will receive any meaningful running back carries anytime soon, but he is an interesting speculative add especially because Dynasty Owner awards points for return yards.

Anthony Schwartz on the other hand should be added in most leagues.  He was drafted by the Cleveland Browns in the third round of the 2021 NFL Draft.  Schwartz obviously has amazing speed, but he also joins a team in which he will have a hard time receiving any meaningful volume.  At best, he will be the WR3 on the team, and that is being optimistic.  In order for that to happen, he would have to beat out Rashard Higgins and Donovan Peoples-Jones.  There is a good chance however that Schwartz will be used as a gadget type player where he will have plays designed and called specifically for him.  In this way, he is also an interesting add.  I drafted him with the 3.10 in my Beta league, and I was happy to get him there.  He is owned in 61.5 percent of Dynasty Owner leagues.

Regardless of what you think about my breakdown of those two rookies, you have to admit that it is strange.  Strange that the “fastest” running back and wide receiver for their class are being relegated to the end of the draft or not drafted at all.

Well, let’s jump into some early running back rankings.

Before I release these, I want to reiterate something that I preface all of my rankings with.  These are not total point rankings.  They aren’t only rankings for 2021.  They are Dynasty Owner rankings.  I’m attempting to make rankings that are relevant for years to come.  For that reason, my rankings (especially for running backs) may seem off.  I accept that others will have a different opinion than me, and I gladly welcome a discussion on why I’m wrong.  Hell, it seems strange to me that I have Cam Akers over Dalvin Cook.  It also seems strange to me that I don’t have Alvin Kamara in the Top 10.  I understand that may sound far-fetched, but allow me to explain…

For how much value Taylor’s contract provides to Dynasty Owners, CMC provides that with his production.  Yes, he is making over 16 million dollars per year, but if he continues to do what he has done his entire career (including the few games he played in 2020) then he will still be a value at RB2.  If I were in a startup league and I had to pick one running back, it would be Taylor.  If I had to pick a second after Taylor is gone, it would be CMC.

I wrestled with the next two spots.  I have been flipping Chubb and Ekeler back and forth for the past few days.  Ultimately, I decided that the one year that Chubb has left on his rookie deal ($1,845,774) is too valuable to ignore.  Barring injury, I don’t see a world where Nick Chubb is not a Top 10 running back in 2021.  It is actually likely he will be a Top 5 back.  For that reason, I have him ahead of Ekeler.

Cam Akers is a player that I might hear some flack about after this article is posted, and that’s okay.  It’s better than okay.  It’s good.  I want to hear what Dynasty Owners have to say about my rankings, because it starts a discussion and only improves my views.  That being said, Akers is my RB5 right now, and he comes in as the second running back from the 2020 class.  I had a very healthy discussion about Akers in one of my paid leagues (League #27464).  There were some questions about how I could have CMC at RB2, yet not have Kamara in the Top 10 at all.  Most of it probably stems from the unknown.  I don’t know what the Saints’ quarterback situation is right now and that affects Kamara.  If something favorable happens between now and when my final rankings are released, then I will adjust accordingly.  For right now, CMC and Cook are the only two high salary running backs that I feel comfortable having in the Top 10.  This is the question I posed to some of my 27464 league mates…If you could draft a player that gives you 75% the production of Kamara, but he’s one tenth the price, why would you not always draft that player?  That is essentially what you’re doing when you draft Akers over Kamara.  This isn’t even taking into account the fact that Akers is four years younger than Kamara.

Najee Harris is the lone rookie on this list, and I am very excited about his future.  I honestly wanted to put him higher, but the unknown is a scary thing.  I’d like to see him play at least a little before I start considering him a Top 5 DO running back.

Sandwiched in between two 2020 rookie running backs we have two veterans.  Saquon Barkley and Dalvin Cook.  Saquon has a single year left on his rookie contract.  The contract is still a value, and (like everyone) he would rank higher if we knew big money wasn’t on the horizon.  Saquon is most likely going to make more than CMC currently does when he signs a new contract next year.  Of course, he will still be rosterable and 100% owned, but his value will decline rapidly.  Look for his salary to double next year from $7,798,688 to around $16,000,000.

Dalvin Cook will be just fine as well.  I project he will outscore Kamara over the next couple of years so that is the reason he is ranked higher.  It’s also worth noting that Dalvin makes $2.4 million less per year.

Finally, we have J.K. Dobbins and D’Andre Swift.  Dobbins makes roughly $700,000 less than Swift and is projected to outscore Swift over the next few years.  The recent two year – $10 million extension of Gus Edwards is concerning for Dobbins owners, but Dobbins will still receive plenty of touches and opportunities to stay valuable.  I’m not more concerned about Gus Edwards to Dobbins than I am about Jamaal Williams to Swift.  At some point we are splitting hairs as both will have good seasons, and both are projected to have great careers.

I want to wrap this article up by continuing with my value rankings spiel.  What I don’t want to take away from this article is that TheJerk would never draft Kamara over anyone in the Top 10.  I don’t want you to think that because it isn’t the truth.  If you go into your start up draft knowing that you are going to spend heavily on running backs in the early rounds, then by all means do so.  What I am doing is giving you my opinion on where you can create the most value in your picks, and that is reflected in my rankings.  For example:  I would much rather draft a young, cheap running back in the first round and save money for quarterbacks and wide receivers in the later rounds.  Expensive, productive quarterbacks and receivers will be available later in the draft.  That’s when I want to spend my money.

That wraps up this week’s article.  I thank everyone for reading, and I ask that you look out for the YouTube video that pairs with this article.  As always, thank you for reading.  Take care and be safe.