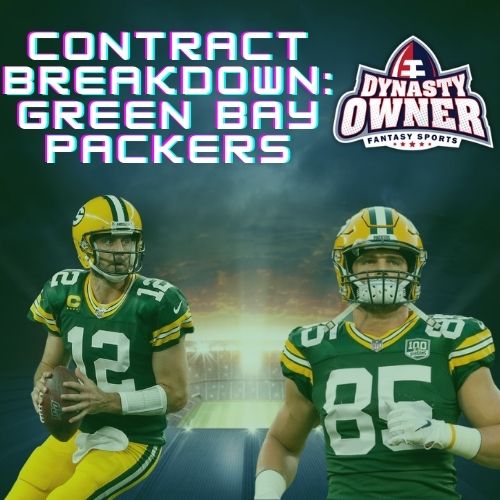 Hello Dynasty Owners and welcome.  Today I am going to wrap up the NFC North as I talk about the final team from the division, The Green Bay Packers.  My goal was to leave the Packers until the end of the division in order to allow more time for Aaron Rodgers news to become clearer.  Well, as I expected, nothing much has changed in the past three weeks.  If anything, it seems like there is more uncertainty than ever.  So where does the drama stem from?  I suppose no one knows the exact reasons Rodgers is disgruntled with the Packers’ leadership, but I think it’s safe to assume that it revolves around a couple of key issues.

Second, is the fact that the Packers have not drafted a wide receiver or running back in the first round of the NFL Draft since 2002.  The last player was Javon Walker (WR) in 2002, and he was drafted three years before Rodgers.  That’s right, since Aaron Rodgers has been a Green Bay Packer, they have taken zero running backs or wide receivers in the first round.  In addition, there have only been five wide receivers taken in the second round since Aaron Rodgers was drafted in 2005.  They are Terrence Murphy (2005), Greg Jennings (2006), Jordy Nelson (2008), Randall Cobb (2011) and Davante Adams (2014).  Every other wide receiver that played for the Packers was either a lower pick or was not acquired through the draft.  The Packers are notorious (especially in the last ten years) for not investing in early offensive weapons, especially pass catchers.

Finally, and most importantly, the Packers selected Rodgers’ replacement (Jordan Love) in the first round of the 2020 NFL Draft.  Now, I’m not going to bad mouth this pick as much as many analysts have, but it did seem odd given the fact that Green Bay was one game away from reaching the Super Bowl the year prior.  It seemed, in my amateur opinion, that the Packers organization was taking what they had for granted a little more than they should have.  Regardless, Love was drafted with the 26th overall pick.  The Packers traded up for Love, and it has been stated that Rodgers was unaware Love was going to be drafted.  There have been rumblings and rumors of other issues within the organization, but these are the main issues that I have noticed.

So, what happens next?  The answer is…only Rodgers knows, and that may be an incorrect statement in itself.  Maybe he hasn’t made up his mind, but I see only two likely outcomes.  First, Rodgers plays, and he plays damn well like he always has.  The second option is that he sits out for a portion or all of the 2021 season.  I see this being less likely as this situation will get ugly and expensive for both parties.  The third option is that he is traded, but I think that has a very low chance of happening.  Packers GM Brian Gutekunst has stated that Rodgers will not be traded.  In the end, I don’t have much for you other than speculation.  Rodgers ($33,500,000) is owned in 71 percent of Dynasty Owner leagues as some people have already cut ties with the 2020 NFL MVP.

There were four notable free agents that the Green Bay Packers had at the end of the 2020 season.  All have signed with their respective teams for the upcoming season and only one of them will not be playing for the Packers.  That player is Jamaal Williams…

Williams joins the rival Detroit Lions.  He leaves behind 119 carries and 31 receptions.  Aaron Jones and A.J. Dillion will look to pick up the extra opportunities.

Allen Lazard was issued a tender by the Green Bay Packers so he will remain with the team for at least one more season.  Lazard was an exclusive-rights free agent which means that he had less than three accrued seasons in the NFL.  Given that fact, he had virtually zero leverage as he is unable to negotiate a contract with another team.  The tender was issued to Lazard, at the league minimum ($675,000), and he had almost no say in the matter.  Lazard will once again be a cheap wide receiver stash with the possibility of becoming the number two wide receiver in Green Bay.

Robert Tonyan was a restricted free agent which means he had a little more leverage than Lazard.  In Tonyan’s case, he was issued a second round tender by the Packers, but he was then also able to go out and negotiate with other teams if he chose to do so.  In the end, Tonyan signed the second round tender and will make $3,384,000 for one year.  Tonyan will be a sneaky pick in startup drafts this year.  His low salary and low ADP make him one of the tight ends I would target later in a draft.

Finally, we have the twelve million dollar man, Aaron Jones.  Jones finished as Dynasty Owner’s RB5 despite missing two games due to injury.  The pay increase that he just received will tank his overall Dynasty Owner value, but I would feel pretty confident if I did end up drafting him.  If you are able to save money elsewhere in the draft, he will be a solid RB1 for the 2021 season.

Similar to last week, today I am only going to break down a single player.  His name is Robert Tonyan.  Tonyan broke out last season as a nearly unknown player.  He came into the 2020 season as the suspected number one tight end for Green Bay, but he was still barely owned in any league, even Dynasty Owner.  It took a couple of weeks for people to start taking notice of Tonyan, but after five touchdowns in the first four games, he couldn’t be ignored anymore.  In the end, he finished as TE5 with 52 receptions, 586 receiving yards and 11 touchdowns.  The touchdowns are really what catapulted him above fellow tight ends like Mark Andrews, Noah Fant and Mike Gesicki.  He actually tied Travis Kelce for the most touchdowns by a tight end last season.  That TE5 finish is a little deceiving due to the fact that Tonyan (TE5) produced 138.2 points less than Kelce (TE1).  Tonyan also produced over 100 points less than Darren Waller (TE2).  The point I’m trying to make (and that I’ve made before) is that after the top tier tight ends, point differences between players become more negligible.  Let me give you an example…

At any rate, let’s return to Tonyan.  He is predicted to finish as TE18 in Dynasty Owner for the 2021 season.  If he does produce at this level he will not be able to be relied on as a starting tight end.  I would be more than happy to have him as my bench tight end, but he would have to keep up his 2020 touchdown rate to become a starter on my team.  He should be owned in every DO league (and at his moment he is), but you are going to need a better tight end on your roster if you want to win the tight end position week after week.

This brings me to another overarching theme that I thought about while writing this article.  It is going to be almost impossible for someone to win the Chase for the Ring without one of the top three tight ends at the end of the season.

Last year, the two players were Kelce and Waller.  Without either of them, I don’t really see a feasible route to The Ring.  In 2021, I see that including three players.  I don’t think anyone can win the ring without Kelce, Waller or Kittle.  There is always a chance that a player like Kyle Pitts or T.J. Hockenson jumps up into that conversation, but unfortunately I think that’s the end of the list.  This is just something to keep in mind as you make trades and/or get into start up drafts.

I want to thank everyone for reading and for watching my video breakdowns on YouTube.  Message me on Twitter (@dynastyjerk) and let me know if you have any questions or concerns.  I would appreciate it if you followed @Dynasty_Owner on Twitter as well as subscribed to Dynasty Owner on YouTube.  Thank you all.  Take care and be safe.