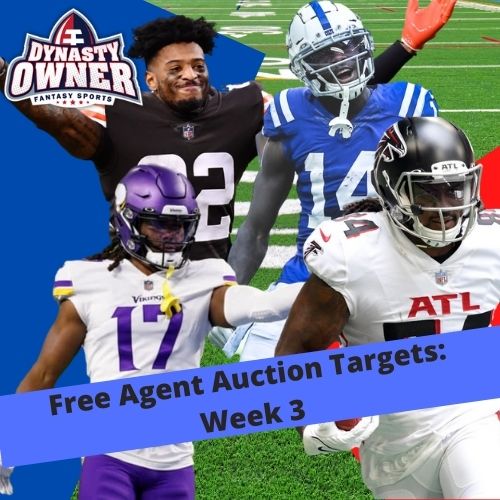 Is there something about Week 2 that causes a ton of NFL injuries? In Week 2 of the 2020 NFL season, we saw multiple stars go down with injury. Christian McCaffrey, Saquon Barkley, Courtland Sutton, Nick Bosa, and Cam Akers all suffered Week 2 injuries in 2020. In Week 2 of 2021, multiple things outside of injuries caught my eye and we’ll cover those in this week’s edition of Jay’s Week 2 recap.

The Ravens and the Chiefs put on an absolute show Sunday night with Lamar bouncing back and beating Mahomes for the first time in his young career. The Vikings defense continues to struggle and looks like it will be the teams Achilles heel all season. Aaron Rodgers bounced back in the 2nd half of Monday night’s game beating the Lions 35-17. I see the Packers as a team that gets better week in week out and comes ready to play when it matters most. The Titans new offensive coordinator finally figured out how to win football games when he let Derrick Henry carry the load against the Seahawks to the tune of 35 carries for 182 yards and 3 touchdowns. Henry also came away with 6 catches for 55 yards, potentially adding another element to his game. Are the Texans for real? The Browns struggled against the Tyrod Taylor led Texans but ultimately came away victorious after Taylor left the game in the 2nd quarter. The Jaguars looked like a much better football team this past weekend, but it unfortunately it did not mean a big game from Trevor Lawrence as he struggled against a very good Broncos’ defense. The Cowboys defense looks much improved from last season and found a way to win a game without Dak Prescott needing to throw for 400 plus yards. Finally, we have Kyler Murray for MVP! Kyler finished Sunday’s game with 400 yards passing and 4 touchdowns resulting in a 34-33 shootout win over the Minnesota Vikings.

Alright Dynasty Owners, we are back with another week of trying to find a diamond in the rough with the Free Agent Auction targets. The free agent articles/videos will be dropping every Tuesday afternoon in advance of when bids process on Wednesday at 5 AM and will consist of the week’s Top 5 free agent adds. I will do my best to keep the players listed at an ownership percentage of 65% or less and make sure all players have contracts of $8,000,000 or less, with most players coming in at under $4,000,000. One last note, in Dynasty Owner you will be credited each week with 25% of your entire Bench’s score making these weekly free agent pick-ups extremely important to help boost your total weekly score.

On to the top targets for Week 3:

K.J. Osborn is one of the repeat guys on the list from last week’s Free Agent Auction article. Osborn had another big week after his strong showing to start the 2021 season in Week 1 and will likely be rostered in north of 90% of Dynasty Owner leagues come the start of Week 3. In Week 2, Osborn again blew up to the tune of 5 catches for 91 yards and a “tuddy” as Brady and Gronk like to say. The Vikings’ defense has looked atrocious to start the 2021 season and looks as if it will continue to be an issue through the season. If the Vikings defense does continue to struggle, Osborn should continue to thrive. The last thing I love about Osborn is the way Adam Thielen played towards the end of last season pointing to a potential need at the receiver spot with the Vikings. In the back half of 2020, Thielen’s fantasy production was largely dependent on his touchdowns.

Sammy Watkins did not have the greatest performance against the Chiefs, but he showed me that he will have a consistent role in the Ravens offense this season. The Ravens ran the ball 41 times on Sunday and Watkins still found a way to come up with 4 catches for 44 yards good enough for 8.4 Dynasty Owner fantasy points. If Watkins can produce like that on his down weeks, he will be more than worth a pickup for contending teams. Another factor I love about picking up Watkins is that he only has 1 year remaining on his contract meaning you can move on from him free and clear at the end of year. One thing that does worry me with Watkins is when Rashod Bateman returns to the starting lineup. Will it hurt Sammy Watkins’ production to the point that he is not playable?

Another free agent run another week of the legend Zach Pascal talk. Pascal has seemingly earned every bit of Carson Wentz’s trust in the redzone as he is the only one Wentz seems to throw to these days when the Colts get inside of the 20. In Week 2, Pascal performed well again against a tough Rams defense with 5 catches for 38 yards and a touchdown. It’s not a crazy scenario to put Pascal on your Bench and forget about him if he is going to continue to see 6-8 targets per game, especially when some of those targets are in the redzone. Be sure to grab the 2020 Dynasty Owner livestream WR1 before it’s too late and the rest of the Dynasty Owners get on board. One thing you will want to monitor is the health of Colts quarterback Carson Wentz as every playmaker on the team will likely see a dip in production if he can’t play.

I mentioned last week how gross it felt to have Cordarrelle Patterson listed as a pickup. His play on the field led to me doubling down this week and putting him on the list again, though this week doesn’t feel quite as gross. In Week 2 against a very good Tampa Bay defense Patterson found the end zone twice and accounted for 69 total yards. Mike Davis was again inefficient but still managed to come away with 16 total touches meaning Patterson’s role still has room to potentially grow. If Davis continues to play the way he is, I could see Patterson getting an uptick in usage while stealing some from Davis. Regardless I think he has carved out a nice role for himself in the Falcons offense. The Falcons look like one of the worst teams in the NFL through the first 2 weeks of the season and look as if they will be down by a lot of points on a weekly basis. The more the Falcons throw the ball, the more opportunities Patterson will get.

Rashard Higgins may come as a surprise to some on this list but with the health of Odell Beckham Jr. and Jarvis Landry still up in the air, I feel Higgins should be a big factor if either one misses the game this coming week. Higgins has always played well when given an opportunity and looked good in limited work this past week against the Texans. Higgins caught both of his targets ending the day with 2 catches for 27 yards. The Browns used three tight ends in the passing game Sunday with Harrison Bryant, Austin Hooper, and David Njoku all catching at least two passes. If the Browns want to have some type of passing game, they will need someone to step up and who better than the guy who already has a great connection with Baker Mayfield, Hollywood Higgins.

After a wild first two weeks, the Free Agent Auction is starting to slim down. Make sure you are filling out your Bench and the back end of your rosters as players who are productive full-time are extremely hard to come by the later the season goes.

Thank you all for reading and as always good luck on your 2021 Chase for the Ring!