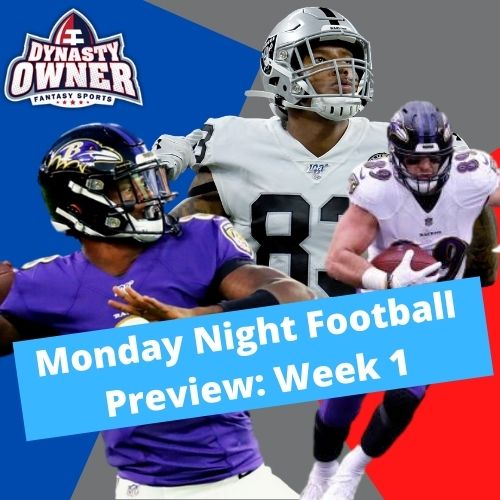 In tonight’s game, we have the Baltimore Ravens heading to the new black hole in Las Vegas to face the Raiders. The Ravens will be at a slight disadvantage as the fans will finally get to break in their new stadium, even though it was built and played in over a year ago. In this preview article, I will cover the over/under for the top players in the matchup, preview the game giving you my final score prediction, and showcase two Dynasty Owner games in which the final outcome will likely hinge on what happens tonight.

In this matchup, there are a few things that grab my attention right off the bat, but none more than how effective can the Baltimore Ravens’ running game be without J.K. Dobbins and Gus Edwards. The Ravens backfield suffered three devastating season ending injuries (Dobbins, Edwards and Justice Hill) before they even played a meaningful snap this season. Talk about bad luck! Can Lamar Jackson continue to thrive rushing the ball without any of his top backs?

I am also extremely intrigued to see the Las Vegas Raiders wide receiver room on the field. The Raiders top two receivers – Bryan Edwards and Henry Ruggs – struggled horribly in their rookie campaigns and the Raiders need at least one to perform at a well above average level if they want to consistently score points. Let’s take a quick look at the stats for Ruggs and Edwards from the 2020 season. Neither one had a great season, and both scored few Dynasty Owner fantasy points (DOFP):

As you can see, the pair put up disappointing numbers for as hyped as they were going into the season, especially for Ruggs with the first-round draft capital. I am expecting both Ruggs and Edwards to take a step forward this season but do not expect Edwards to have a good enough year to keep the Number 2 role with Vegas come 2022.

The last thing I am looking for in this game is to see how the Raiders utilize their running game with newly acquired Kenyan Drake. I am still expecting Josh Jacobs to see the bulk of the carries with Drake being more of a 3rd down back and someone who can give Jacobs a breather. One thing to note even though it’s probably too late to matter for most Dynasty Owners for lineup setting purposes. Josh Jacobs will likely be a game time decision for this contest because of an illness. If Jacobs does miss the game or isn’t quite as effective, Drake could be in line for a big workload.

* Over if Jacobs doesn’t play

Overall, I am expecting this to be a good game up until the end when Jackson wears the Raiders defense out with his legs and starts to take over. While I do feel we will see Jackson has improved some as a passer, the overall stats won’t come until the running game around him gains some traction. In the Gruden era, the Raiders always seem to play tough against good opponents and while I am expecting more of the same tonight, I do feel the Ravens will end up victorious. The Raiders will need a steady presence at receiver to win this game and prove me wrong, or Darren Waller will need to go absolutely nuts.

Each week I will pick two games that are close in score and will likely be decided during Monday Night Football. If you happen to find yourself in this situation on Sunday nights, please get ahold of me on Twitter (@jaypoundsnfl) and I will gladly feature your game here.

I chose this game because I just love when I get the chance to highlight how important Bench scoring can really be and I feel a lot of us overlook it, myself included. In Dynasty Owner, each team gets 25% of its total Bench score added on to their total score every week, making depth a bigger part of the game.

Herbie: Fully Loaded has Kenyan Drake and Bryan Edwards on their Bench and will need to get 20 points combined from them to pull off a 135.4-135.4 tie. If Jacobs ends up missing the game, or is not as effective as usual, I see Herbie pulling off the rare come from behind Monday Night Bench scoring victory. If Jacobs does play, I think Packer H8ter will take this week by the narrowest of margins.

The two Dynasty Owners in this matchup have got to be feeling a bit nervous with the final projected score expected to be 130.2 to 131 in favor of Perkalicious. As we all know, projections usually don’t mean a whole lot in fantasy football. As I have mentioned earlier, Jacobs may miss the game and if he does it favors Perkalicious quite a bit with Drake ready to go for his squad on the Bench. I am going to go against the projections and take KRALJ_SMECA as the winner of this matchup after Jackson and Andrews score above what they are supposed to for their team.

Hold your horse’s folks before we get out of here, we must give out what Matt “The Jerk” has turned into a Dynasty Owner tradition in his most recent Thursday night preview article with the Value of the Game award. In this game, there are only two players who came to mind. No, one is not Darren Waller, even though he is a great value at the tight end position for only $7,450,000 against the cap. The two that came to mind are Lamar Jackson and Mark Andrews with the Value of the Game ultimately being Lamar Jackson. I know I know quarterbacks win all the awards in football but Jackson as we all know is different because of his legs which is a huge part of what makes him my Value of the Game.

Thank you all for reading and good luck on your 2021 Chase for the Ring!