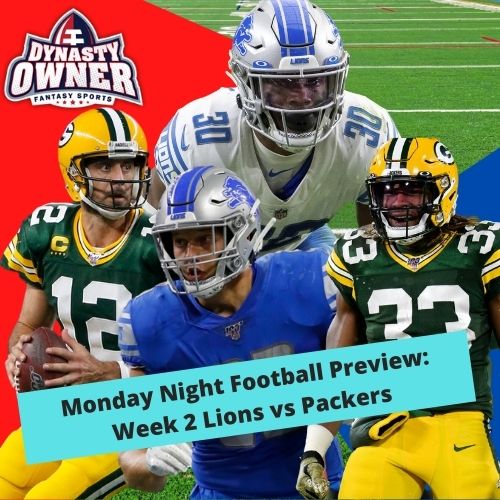 As Week 2 starts to wind down I am sitting here watching the fantastic Chiefs vs Ravens game while having a drink and soaking it all in. Week 2 was beyond wild, and I can only imagine more of the same is in store for Monday Night Football. Lamar Jackson flips into the end zone for a go-ahead TD just after typing that last sentence.

In last week’s Monday Night Football game, I pegged Lamar Jackson as the Value of the Game, and it turns out I was too optimistic about him as he only put up 19.3 Dynasty Owner fantasy points when I pegged him for 34.9 points. While I did come close on a lot of Jackson’s stat line, I was expecting him to do quite a bit more in the redzone and had him accounting for 2 TDs instead of just one. He also missed gaining 100 yards by a little bit (14 yards) and missed the 100 yards rushing bonus. He also had three fumbles (2 lost) that I didn’t factor in. Ty’Son Williams was the ultimate value in last week’s game finishing with 18.4 Dynasty Owner fantasy points on a salary of only $660,000.

I am pretty sure everyone can guess what I am watching for in tonight’s game because you are likely watching for the same thing. In Week 1, last year’s MVP Aaron Rodgers looked like he did not want to be playing football for the Green Bay Packers anymore. Rodgers showed terrible body language all day last Sunday and there is no way his teammates did not take notice. Rodgers is one of the best quarterbacks to ever pick up a ball and if there is anyone I feel can turn on the proverbial switch as we say, it is Rodgers. I am more curious to see how his teammates respond to his poor play and body language come Monday night. Aaron Rodgers was so bad in Week 1 he had only 0.6 Dynasty Owner fantasy points.

In Week 2, Aaron Rodgers and company get a friendly matchup with the Detroit Lions defense which has to be a welcoming site for the Green and Yellow. If the Packers struggle tonight against the Lions, there will be plenty of questions to answer in Green Bay, Wisconsin come Tuesday morning. The Lions come to town after an exciting Week one game with the 49ers which ultimately led to a loss for the team from Mo-Town. From a Lions perspective I am looking to see if they can be competitive for an entire game or if they are going to be a team who has a few scoring outbursts throughout this season. The last couple things I am looking at for the Lions is to see how their running back room continues to play out as far as a split between Jamal Williams and D’Andre Swift. Finally, I am excited to see how this young Lions receiving room will play with Tyrell Williams ruled out for the contest.

I like the Green Bay Packers in tonight’s game and think the final score will be:

I am expecting this to be a revenge game of sorts for Aaron Rodgers and the only reason he is getting revenge on the Lions is because that’s who is on the schedule after a horrible game last week. If Rodgers comes out and looks the way he did last week against the Saints, we may end up seeing Jordan Love at quarterback for the foreseeable future for the Packers. A bad game is one thing but last Sunday seemed to be more than that in my opinion. The Lions showed they will not quit under coach Dan Campbell last week against the 49ers and expect more of the same fight out of them this week, though I don’t think the final score will be all that close. I see the Lions as a team who gets beat up early in games but also a team who will fight hard enough to get back into games when teams take their foot off the gas pedal. The Packers will not be one of those teams after last week as they have something to prove. Look for a big-time bounce back for the Packers Big Three – Aaron Rodgers, Aaron Jones, and Davante Adams.

Each week I will pick two games that are close in score and will likely be decided during Monday Night Football. If you happen to find yourself in this situation on Sunday night, please get ahold of me on Twitter (@jaypoundsnfl) and I will gladly feature your game here.

SKOL Vikings (Robert Tonyan as a Starter left to play) – Ironically it comes down to a Packers player for the Vikings manager to win the game on a Monday Night comeback. SKOL has the Packers TE Robert Tonyan left to play for their team, and I don’t expect them to be happy about the Packers player who they secretly cheer for after Tonyan fails to hit his projected total leaving SKOL Vikings on the wrong end of things…. Just like my Steelers against Derek Carr and SKOL’s Vikings against the Cardinals.

Bloated Sack of Protoplasm (D’Andre Swift as a Starter and Austin Siebert on Bench left to play) – Ultimately this loss for Bloated will fall on Jameis Winston, who only scored them 7.4 Dynasty Owner fantasy points, and the Saints offense who looked every bit as inept as the Packers did in Week 1. Bloated has a great shot to pull out the win on Monday night with D’Andre Swift yet to play. After the games we saw Aaron Rodgers and Swift have in Week 1, it will not surprise me if I end up wrong on this prediction.  Bloated ends up losing as Rodgers balls out on the Lions defense.

Joeybertino (Aaron Rodgers as a Starter left to play) – As I said earlier, I think this is a revenge game of sorts for Rodgers and I feel Joeybertino will end up happy as Rodgers rights his wrongs against a bad Lions defense. I will offer up a little insider advice on this one for our user Joeybertino. If Rodgers has another terrible week, use your Amnesty Provision and pick up either Derek Carr or Ryan Tannehill (they are free agents in your League, I looked) to attempt to save your season after an 0-2 start on the back of the 2020 NFL MVP.

Finally, we have our weekly Jay’s Value of the Game, brought to you by Dynasty Owner. Yea that was supposed to sound like a sponsor. In this week’s contest I have my Value of the Game as the man with two last names – Marquez Valdes-Scantling. MVS comes in at a salary south of $700,000 meaning if he has a couple catches and finds the end zone he is going to be tough to compete with in terms of Dynasty Dollars per point value. I am looking for MVS to have a much better day than a few short catches and a touchdown as I have him grabbing 3 short catches and a bomb for a touchdown leaving him with the stat line below.

I also considered Swift and Cephus as my Value of the Game but the upside and cheap salary of MVS was too much to pass up.

I hope everyone had a great Week 2! Thank you for reading and good luck on your 2021 Chase for the Ring!