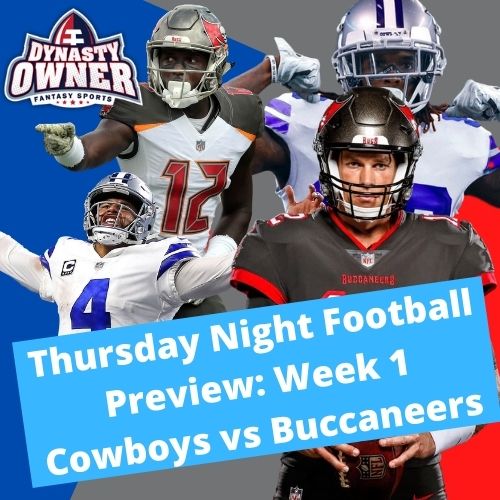 Hello Dynasty Owners and welcome to my first ever Thursday Night Football preview article. I will be constructing all the Thursday Night Football previews for the year, while Jay (@jaypoundsnfl) does the Monday Night Football previews. Throughout my previews, I’ll highlight some general things I’ll be watching for in the game. For example:  I may reference previous matchups, players returning from injury or wide receiver/cornerback matchups. I’ll review some of the top players playing in the game and what you should be doing with them (Starting lineup, Bench, Practice Squad). Finally, I’ll give a Value of the Game. This player will be one who I project to lead all players in overall value for that game.

Sounds good?  Let’s get into it.

There are a few general things I’m going to be looking for tonight. First, I want to see how Dak Prescott is moving following his elaborate ankle surgery. In addition to that, I want to see how his shoulder looks after an injury to it that sidelined him for a majority of the pre-season. I did watch Hard Knocks, and it seemed like Dak’s ankle was fully recovered, but you never know until you see it in a live game scenario. I look forward to witnessing Dak’s return not only for this game but for the entire season.

The second thing I will be looking for is how the “pecking order” for the Buccaneers’ receivers shakes out. Yes, I know this will be a small sample size of only one game, but it will be interesting to see, nonetheless. Here is how the target share ended up for the 2020 season…

A “-“ indicates the player missed the game, * indicates that the team was on bye in Week 13

These are all the primary pass catchers for the Bucs last season with their targets per game.  As you may remember, Antonio Brown (AB) did not play for the first eight weeks of the 2020 season. Throughout the entire 2020 season, Mike Evans had a 31.2 percent target share among wide receivers. Godwin was second with 24 percent and Antonio Brown was third with 17.5 percent despite missing the first eight games. What’s interesting is how these numbers are skewed when you only look at the last half of the season when AB was playing. Here are the numbers then…

That is the list. These seven players should lead this game in scoring, and they should be in your Starting lineup in almost every Dynasty Owner league.

Even though Antonio Brown missed practice on Monday and Wednesday, he is expected to play tonight. However, I don’t have him as someone who should be in your Starting lineup since I think Evans and Godwin will be Brady’s top two targets. Instead, leave AB on the Bench.

Remember that players on your Dynasty Owner Bench accumulate Dynasty Owner fantasy points and 25% of the Bench points are added to your total score. While Antonio Brown, Rob Gronkowski and Michael Gallup probably shouldn’t be in your Starting lineup, they will produce some points and should be on your Bench. Same with the trio of Tampa Bay RBs likely to split reps for the Buccaneers. Your Bench players are:

As for other widely rostered players on Dynasty Owner, my recommendation is to leave the rest of them on the Practice Squad in Week 1. They might be useful at some point this season, just not this week. These players are:

Finally, let me present to you my “Value of the Game.” This is my prediction as to who will be the greatest value. Like always, value takes into account not only fantasy points but salary.  Throughout this season, you will find that the majority of my “Values of the Game” will also be mentioned in my top players. After all, you are going to have to be a top player in order to qualify as a top value. The player I want to highlight this week is CeeDee Lamb.

Lamb comes into his sophomore season poised for a real breakout. Lamb’s rookie season is often overshadowed by what Justin Jefferson did. There is no doubt that Jefferson had the more impressive season, but that shouldn’t take away from what Lamb did. He had 84 touches, 1,017 total yards, and six touchdowns. He also added 219 return yards and a kickoff return for a TD (all of which added to his point total). Oh, by the way, he did all this without Dak Prescott for the majority of the season. I cannot wait to see Lamb’s career, season and even this game with Dak. The fact that he is paid $3,502,503 in salary per year is even sweeter. Look for Lamb to lead all Cowboys in targets tonight. Here is my stat and Dynasty Owner fantasy points (DOFP) prediction for Lamb on Thursday…

This stat line would be good enough to crown Lamb as my Week 1 Value of the Game.

As always, I thank everyone for reading.  Football is back!  I’ll talk to you all next week on Wednesday.  Take care and be safe.