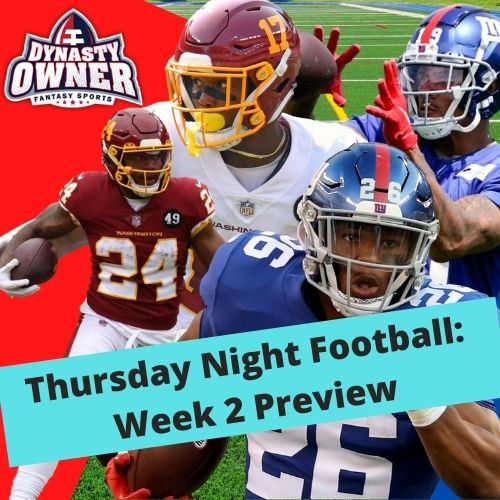 Hello all, and welcome to Week 2 of Thursday Night Football. We were graced with one of the best games of the week last Thursday as the Tampa Bay Buccaneers beat the Dallas Cowboys. The deciding play was a game winning kick, which was a clutch score and worth an extra 3 Dynasty Owner fantasy points for Ryan Succop under the Dynasty Owner scoring system. This week, we will have a more modest competition in my opinion. That game will be played by the New York Giants and Washington Football Team. Before I talk about this matchup, let me recap last week.

My Value of the Game for Week 1 was CeeDee Lamb. I projected that Lamb would have a stat line of 7 receptions, 87 yards, and one touchdown. That projection had him pegged for 21.7 Dynasty Owner fantasy points. As it turns out, Lamb exceeded my expectations, and he posted a sensational line of 7 receptions, 104 yards and one touchdown (plus 12 return yards). That equals 23.7 fantasy points. While this performance certainly should qualify him for a top Value of the Game, he was not the highest value to be found. The number one value went to Antonio Brown. Brown had the exact same number of Dynasty Owner fantasy points as Lamb (23.7), but his salary is roughly $500,000 less than Lamb. This makes him a better value and Week 1’s official “Value of the Game.”

I am looking for two things while I watch this game tonight. First, I want to see how both teams respond after their Week 1 losses. The Football Team was a little closer to victory as they were winning up until the 4th quarter. I also want to see how Taylor Heinicke comes in and plays in his first 2021 start. Unfortunately, Ryan Fitzpatrick went down to a hip injury after completing only three passes on Sunday. He was ruled out rather quickly, and it was later announced that Fitz will miss at least three weeks after going on the injured reserve. This is obviously a very unfortunate circumstance for Fitz, but that brings a great opportunity for Heinicke.

Unlike last week, there are very few players who qualify as locked in Starters for the Thursday Night Game. These players include:

These are the only four that I would say need to be started under any circumstance.

There are also a few players I wouldn’t mind having on my Bench tonight.  They are:

Sterling Shepard and Logan Thomas may have cracked your Starting lineup, and that’s okay. I would prefer not to start either, but I can understand if you are thin at either position and need the start. I can understand Thomas a little more than Shepard due to the fact that it isn’t easy to find a capable tight end these days.

Value Of The Game

As I stated in the opening of this article, CeeDee Lamb was my Value of the Game last week.  He did not disappoint as he put up 23.7 fantasy points despite a low salary of $3,502,503.

Tonight, I will be taking Antonio Gibson as my “Value of the Game.” Gibson enters Week 2 with an injury designation (a shoulder injury). The expectation is that he will play, and he will have no limitations. Gibson looks to pick apart a Giants’ rush defense that gave up 165 rushing yards to the Broncos. Gibson had a lackluster Week 1 performance to the tune of 9.8 Dynasty Owner fantasy points. Two fumbles (one being lost) certainly didn’t help matters. He will shoulder the majority of the running back workload tonight, and will be a Top 10 running back this week. Combine that with a salary of $1,233,159, and you have yourself a “Value of the Game.”  Here are my projected stats and Dynasty Owner fantasy points (DOFP) for Gibson in Week 2:

Thank you all.  Happy football watching, and I will see you next week.  Take care and be safe.