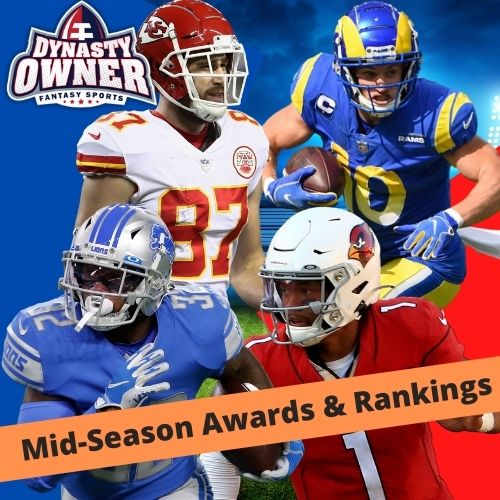 Hello all. I’m Matt TheJerk back with another Thursday article. Today I’m going to be presenting some mid-season awards. While this isn’t the exact halfway point of the entire Dynasty Owner season (including playoffs and the championship), this is the midway point of the regular season. Obviously, not every Dynasty Owner will be competing for the Championship after Week 14. Therefore, I figure Week 7 is an appropriate time to recap the season so far. I’ll be presenting some Top 5 rankings for each position as well as the first half status of the Value of the Year candidates. I have a lot to talk about today so let’s do it…

This is a very solid list, and I don’t see many surprises here. As I mentioned a few weeks ago, I’m not so much surprised that Tom Brady is the QB1, but rather by how much he leads the position. Brady currently has almost 30 points more than Matthew Stafford (the next closest quarterback).

Something else worth mentioning is that Josh Allen barely missed this Top 5 as he is QB7 at the moment. He is the highest ranked quarterback that has already had his bye week. This means that he has one game in hand over every other QB above him. I’m not going to say that he will make up the distance between him and Brady in a single game, but he would without a doubt jump to QB2. Using his average fantasy points per game, he would have 233.8 Dynasty Owner fantasy points (DOFP) and would solidly be the QB2. Just something to think about for all of you Dynasty Owners with Allen on your roster. Bye weeks tend to skew total points.

Henry is far and away the best running back this season. He is currently on pace for 2,484 yards and 24 touchdowns. The biggest surprise on this list is the fact that Ekeler and Harris make the Top 5 despite already having their bye weeks. This is an amazing statistic considering they have played 85 percent of the games that other running backs on this list have.

Again, we have a good mix of veterans and younger players. Likewise, there is a good mix of cheap and expensive salaries. Marquise Brown comes into this list as the best value by far. His WR5 standing combined with his salary of less than $3,000,000 makes him the most valuable wide receiver in the Top 5 (at least on paper).

Also, I wouldn’t be surprised if this list looked very similar to this at the end of the season. All five of these players look like they have no intentions of slowing down, especially Kupp, Chase and Adams.

The biggest takeaway from this list is the idea that the tight end position is very bunched up outside of the top tier. I’ve talked about this before, but outside of the top tier, the position starts to get murky. The other problem is that it’s not easy to predict who will be in the top tier each year. Before the season started, I had Kelce in his own tier by himself, Kittle and Waller in tier two and players like Andrews, Hockenson and Pitts in tier three.

So far this season Andrews has outperformed Waller (injury, low volume) and Kittle (injury). Not only has he outplayed both of them, but his salary is less than one-eighth of Waller’s and less than one-fifteenth of Kittle’s.

Value of the Year Candidates

There are several players that I am keeping my eye on for the Value of the Year (VOTY). There are three quarterbacks, three running backs, two wide receivers and one tight end that I want to mention today. I do believe that one of these players will end up being the VOTY for 2021. The players are:

I mentioned most of these players in the above sections. However, I didn’t talk about James Robinson, Deebo Samuel and Terry McLaurin. All three are outside the Top 5 at their positions, but their salaries are so low that they have a realistic chance of making a run at the Value of the Year.

The odds-on favorite is likely a quarterback just because they historically score more points than any other position. But will that quarterback be able to outperform a running back or wide receiver that has a sub $1,000,000 salary. That remains to be seen, but I think the only QB that can do it would be Lamar Jackson.

In the end, I will predict that James Robinson wins the Value of the Year award for the second consecutive year.

This week was a stand-alone article. Next week I will start talking about some opportunity and efficiency rankings. I did that last year and titled those articles “Opportunity is Almost Everything.” As always, thank you for reading and continuing to support Dynasty Owner.  Message me on Twitter (@dynastyjerk) and let me know if you have any questions or concerns. I would appreciate it if you followed @Dynasty_Owner on Twitter as well as subscribed to Dynasty Owner on YouTube.  Take care everyone and be safe.