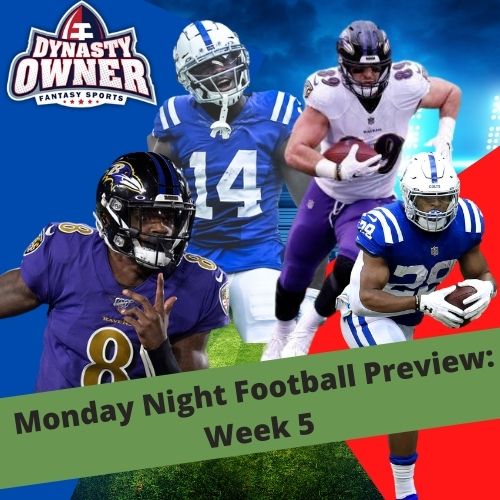 Welcome back to another edition of Dynasty Owner’s Monday Night Football preview. If I am being honest when I looked at the schedule, I was extremely disappointed it was not the Chiefs vs Bills game, though I would have missed on Dawson Knox being the Value of the Game if it had been. Last week, we had the Raiders vs Chargers, and I did not miss on the Value of the Game with Mr. Third and Renfrow (Hunter Renfrow) himself snagging a touchdown and helping me nail my Value of the Game pick. Renfrow finished last Monday night’s contest with a stat line of 6 receptions for 45 receiving yards and a TD (plus 22 return yards and a fumble) for 16.1 Dynasty Owner fantasy points, while I had him pegged for 5 receptions for 62 receiving yards and a TD, scoring 17.2 Dynasty Owner fantasy points in the showdown against the Chargers. You read that right folks, Hunter Renfrow has a place in Dynasty Owner as one of the cheapest, most reliable options in all of football. Renfrow finished with a very similar stat line again in Week 5 catching 6 passes for 56 yards but was unable to find the end zone. I don’t know about you but in my eyes Renfrow is a perfect player to place on your Bench and forget about him all season long, except on bye weeks of course.

It’s Monday nighttime folks and in tonight’s game, we have the Indianapolis Colts facing off against the Baltimore Ravens. In this contest there will be two major things I am watching for with none being more important than Lamar Jackson and the Baltimore run game. Since the beginning of the season, we have seen Lamar put the Ravens on his back and carry them to a 3-1 record with a shot at sole possession of first place in the AFC North through five weeks of play. Jackson has been great thus far through the air which has to be a welcoming sign in Baltimore, but I feel the most important factor of Jackson’s game this season has been his legs and the timely plays he has created because of his uncanny rushing ability. If Jackson can get going the way he has most of this season, we will be looking at a Baltimore victory. The second major thing I will be looking at in this game is the Colts offense as a whole.  The Colts have struggled badly on offense through the first four weeks of the season, and it has led them to a 1-3 record. Can Carson Wentz overcome two sprained ankles? Now that I am thinking about it, is there any other explanation for two bad ankles aside from playing pickup basketball against Allen Iverson? If the Colts want to have any chance at winning this game, they will need a huge performance out of Jonathan Taylor.

Each week I will pick two games that are close in score and will likely be decided during Monday Night Football. If you happen to find yourself in this situation on Sunday night, please get ahold of me on Twitter (@jaypoundsnfl) and I will gladly feature your game here.

Another week, another team counting on Bench points to win. Belichick’s Hoodies had a solid week led by the ageless wonder Tom Brady and his 55.8 Dynasty Owner fantasy points scored in Week 5. Belichick’s Hoodies will need a solid performance all around from Jackson to win as his opponent has Jackson’s kicker Justin Tucker left to play in his Starting lineup. I know staring down the best kicker in NFL history can be daunting but have no fear, Bench points are here. I think Belichick’s Hoodies pulls this one out by roughly a point.

VIP Club Dub must be somewhat upset heading into Monday night’s contest as they had a huge opportunity to go up big and secure an easy win with Patrick Mahomes playing last night against the Bills. Mahomes was only able to muster up 22.7 Dynasty Owner fantasy points which is not what you expect from a quarterback you are paying $45,000,000 per year, especially in a prime-time matchup. Even after a lackluster performance from Mahomes, VIP Club Dub has a chance to walk off Monday night on Justin Tucker’s leg, just as the Ravens have so many times.

With a name like Donkey Punchers and a player name like Rodrigo Blankenship left to play, there is no way this Dynasty Owner loses their matchup! I am just kidding of course, but you have Jay’s Seal of Approval forever stamped on your kicker and team’s name. The projections show that Donkey Punchers are set to lose the matchup by almost 6.0 Dynasty Owner fantasy points, and I must agree with the projection gods on this one.

I really believe Lamar Jackson is quietly having a fantastic season and that will continue into tonight’s game. The Ravens have easily been one of the most beat up teams in football up to this point and Lamar has put his team on his back each week and just continues to win. Landrys Saracens also has Latavius Murray on his Bench, and it seems he is going to be the man in Baltimore’s backfield moving forward. Landrys Saracens sweats this game out, but ultimately pulls away in the end.

As I mentioned earlier, I was able to hit on last week’s Value of the Game by picking the always consistent Hunter Renfrow. This week, I am going to go in a somewhat similar route and take someone most wouldn’t at this point in the season by selecting Mark Andrews as the Week 5 Value of the Game. Andrews has struggled this season to say the least, but I am expecting a bounce back week soon and just hoping it happens this week. The Ravens gave Andrews a massive deal a while back which means they have big plans for him moving forward. At this point, the team almost needs to go out of their way to get Andrews going and I expect to see it this week against a tough Colts defense. If Jackson and Andrews can get going, the Ravens could have a potent offense the rest of the way.

Thank you all for reading and hopefully tonight’s game will be a good one with all these projections coming true. Stay safe and good luck on your 2021 Chase for the Ring!