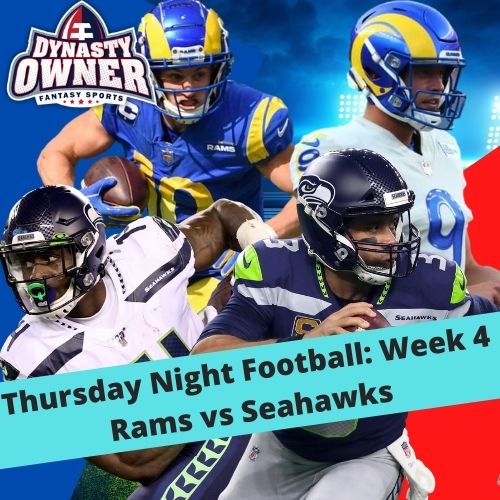 Tonight, the LA Rams travel to Seattle to face a familiar division rival. The Rams are 3-1 while the Seahawks are 2-2. Despite a stout Rams defense, there should be plenty of offensive fireworks. Odds makers currently have the over/under set at 54.5. This is the second highest over/under of the week. It’s second only to the Bills/Chiefs game. I’ll get to it in a few seconds, but there aren’t many players that I wouldn’t want to start in this matchup. But first, let’s talk about last week’s Value of the Game.

In Week 4, I had picked James Robinson to be the Value of the Game. In all honesty, I wasn’t left with many choices other than Robinson. It was virtually guaranteed that he would be the biggest value as long as he received average volume. Well, not only did he receive that volume, but he was very efficient with it. Here is the prediction I made for Robinson last week compared to his actual stats…

While Robinson’s receiving work was not what I or any of his owners wanted it to be, he made up for that with two rushing touchdowns. This stat line combined with his incredibly cheap salary of $763,333 made him Week 4’s Value of the Game.

The number one thing I’m going to be looking for tonight is how the Seahawks offense (specifically Russell Wilson) plays against the Rams’ defense. Through the first two weeks of the season, the Rams were dominating on defense especially against fantasy weapons. Week 4 was a setback for the team as a whole as Kyler Murray picked them apart. Murray ended with 29.3 Dynasty Owner fantasy points. It will be interesting to see if Russ is able to have a satisfactory fantasy performance in the ways that Murray and Tom Brady did or if he will have a similar fate as Andy Dalton and Carson Wentz did in Weeks 1 and 2. My money is on Russ to have above 22 Dynasty Owner fantasy points which should be good enough to start him in most leagues.

All the players that I include in this list are players who I think should be started in most, if not all, Dynasty Owner leagues.  They are:

As I mentioned in my opening, I want just about every piece of these offenses in my starting lineup tonight.  The implied point totals for each team are just too juicy to ignore.

In Dynasty Owner, you are able to set a Bench roster. The players on your Bench add 25 percent of their overall total to your final point total at the end of the week. Therefore, it is important to not only consider your Starting lineup very carefully, but also consider your Bench. These are the players that I would be comfortable placing on my Bench tonight.

I have a few options to choose from for my Value of the Game, but in the end I’m going to pick DK Metcalf.  I also considered Darrell Henderson (and I think he’ll have a fine game), but I think tonight is going to be a Metcalf game. Historically, Metcalf has not played very well against the Rams in the regular season. He had 8 receptions for 87 yards and zero TDs last year against the Rams, but that was combined in both regular season games. However, it may be forgotten that when the Rams and Seahawks met in the Wild Card Round of the 2020 playoffs, Metcalf went for 5 receptions, 96 receiving yards and 2 TDs. I predict a game line closer to the playoff game tonight than the two regular season meetings.  Here is my Value of the Game prediction for Week 5:

This combined with a very affordable salary of $1,146,513 makes DK Metcalf my Week 5 Value of the Game.

Thank you all, and I will see you next week.  Take care and be safe.