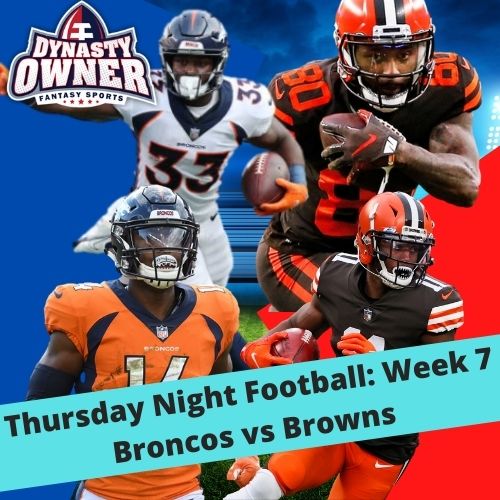 Week 7 starts with a game between two 3-3 teams. The Denver Broncos will travel to Cleveland to battle the Browns. The Broncos started the season 3-0, but it’s worth noting that their only victories have come against teams with a combined 3 wins. Those teams are the Giants, Jaguars and Jets. Under normal circumstances, I would have given this game to the Browns easily, but this game is not taking place under normal circumstances. Let me explain why.

The Browns will be without their secondary running back, Kareen Hunt. Hunt was ruled out early in the week as he suffered a calf injury in Week 6. Hunt has already been placed on IR, and will miss at least three games. There was some hope that Nick Chubb would be able to play in this game after he has been battling a calf injury of his own. Unfortunately, Chubb was also ruled out for this Thursday Night affair. Chubb was declared out on Tuesday, and he will miss his second consecutive game. The final blow for the Browns came yesterday as Baker Mayfield was also ruled out. Baker has a labrum tear that happened in Week 6. He will miss the first game of his career due to injury as Case Keenum will take over as the leader of the Browns tonight.

Cleveland is a two point favorite with a very low forty-one point over/under. It appears Vegas is predicting a low scoring game with so many offensive weapons missing.

Last week, I predicted that Jalen Hurts would be the Week 6 Value of the Game. After watching the game, I was a little unsure if that prediction was right. I compared three of the top players from that game in terms of their Dynasty Dollars per Point (DD/PT) value, and here are the results…

Hurts was indeed the Value of the Game from Week 6 Thursday Night Football. He actually had a pretty poor real life football game, but his rushing touchdown efficiency saved his fantasy day.  Hurts ended the game with 27.1 Dynasty Owner fantasy points (DOFP), and he currently sits at QB9 on the season. Here is my projection from last week compared to the actual results…

As you can see, my projections were a good way off, but the end result is the same.  Hurts was the Value of the Game.

The number one thing I’m looking for in this game is essentially what I talked about in my opening. I’ll be keeping track of which offensive players take the lead for the Browns. They will be missing their top three weapons and overall team leaders. How will they respond, and will their defense be able to keep them in the game?

The popular pickup this week was D’Ernest Johnson. I even picked him up in one of my Dynasty Owner leagues. He was cheap enough to warrant an addition (1 year/$585,000). While I’m not expecting an MVP type game, I will be happy with 8 to 10 Dynasty Owner fantasy points. I think he is more than capable of reaching that goal especially with the expectation that he will be the goal line back.

Every player on this list should be started in nearly every Dynasty Owner league.  At a minimum, you should have a tough decision as to whether you’re going to start them or put them in your Bench slot.

This is the least confident that I have been in a few weeks. I have a player in mind that should be the Value of the Game pretty easily, but there are a lot of new, cheap players on the Browns that have the potential to break out. Regardless, I am going with the established player. This week I am picking Broncos WR Courtland Sutton. Sutton has had an inconsistent start to his season to say the least. He has three games of less than 9.0 Dynasty Owner fantasy points while also having three games of greater than 23.0 Dynasty Owner fantasy points. With Jerry Jeudy out for this game, I see Sutton having a game closer to 23 points as opposed to 9.  Here is my official prediction for Courtland tonight…

This prediction combined with a salary of $1,710,480 makes Sutton my Week 7 Thursday Night Football Value of the Game.

Thank you all, and I will see you next week. Take care and be safe.