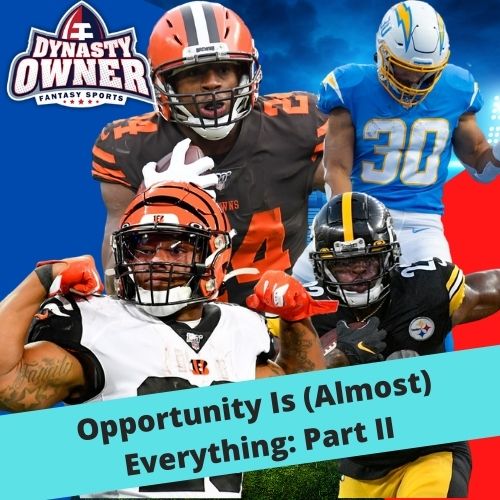 Opportunity Is (Almost) Everything: Part II

Happy Wednesday everyone. This week we find ourselves officially halfway through the NFL regular season. At this halfway point, I will continue my “Opportunity is (Almost) Everything” articles. Today is my second installment, and we will be talking about the running backs. If you missed the first part of this article that was posted last week, I suggest you read that first. It will give you a general understanding of what my goal of these four articles is going to be. If you haven’t read Part I, let me give you a summary from it…

Today we will be talking about running backs. I’ll be presenting the Top 5 of each category listed here:

For our purposes, a running back opportunity will be defined as any rushing attempt or receiving target that player has. Essentially, an opportunity is anytime a player has the ball or has an opportunity to have the ball. Of all the running backs in Dynasty Owner’s Top 20, here are the five that lead in total opportunities through nine weeks…

For the most part, running backs are tightly correlated with their usage. It’s not always the case, but most of the time the running backs with the highest number of opportunities are at the top of the stats page at the end of the season. The same cannot be said for the other positions, especially quarterback. You can see that the first half of the 2021 season is no exception.

What’s interesting is that Derrick Henry continues to lead all NFL running backs in total opportunities despite missing one game so far. It is also unlikely that he will be passed in Week 10 unless Najee Harris has a 38 opportunity week.

The opportunity statistic really doesn’t tell us much as far as efficiency goes. It’s merely a raw volume stat. This can be misleading when it comes to injuries, bye weeks or even missed games due to COVID. Additionally, we can look at a player’s opportunities compared to the number of snaps that they take. You could think of this metric as a way to see who is most involved when they are actually on the field. For example, Cordarrelle Patterson is not on the field much when compared to a lot of running backs in the Top 20, but when he is on the field he “sees” an opportunity 47 percent of the time. So, where he ranks 18th in total opportunities, he now ranks 6th in Opp/Snap. Patterson is being used when he is on the field. Here is the Top 5 for Opportunities Per Snap:

Any surprises or objections from anyone reading? Damien Harris may seem like the outlier from this group, but it shows how involved he has been this season for the Patriots. Not only has he been involved, but I would say he has been necessary for the team’s success. He is getting an opportunity on 54 percent of the snaps that he is on the field for. The other four players (Henry, Chubb, Mixon and Taylor) all make sense to me. They are not only workhorse backs, but they are also vital to their team’s success. They are all relied upon at least 47 percent of the time they touch the field. For reference, this is what the Top 5 looked like last year at this same time…

While many of the names have changed, the Opp/Snap seem to be right on par with this year. All of these players are very efficient at receiving opportunities for the time they are on the field.  Now let’s look at player’s efficiency in terms of Fantasy Points per Opportunity.

If you had to guess which running back inside the Dynasty Owner Top 20 is leading the league in FPs/Opp, who would you guess? I would have guessed right prior to making these statistics, but it’s only because he is an extreme outlier as a player.

I say this because less than 25 percent of his fantasy points have come on the ground. That’s right, the player that’s number one for FPs/Opp is Cordarrelle Patterson.

This is an incredible pace, but it’s not entirely unprecedented. Just last year there was a rookie running back who had very similar numbers. His name is D’Andre Swift…

Swift had an amazing year efficiency wise, but what Patterson is doing is better, and he is leading other running backs by a much wider margin. Austin Ekeler is perennially thought of as one of the more efficient backs in the league, mainly because of his receiving work. This year even him and Kamara are well behind Patterson. This begs one big question…

“Can it continue? Is his efficiency able to be carried through an entire 17 game season?” My answer prior to the season would have been “no”, but this has continued much longer than I would have initially thought. Another question sits in the back of my mind as well…

“What happens if Patterson is given a full volume workload?” Obviously his efficiency will go down as it does for every player, but how much would it decrease? Surely his overall production would increase. Regardless, Patterson is and will continue to be one of the biggest steals in Dynasty Owner this year. He is a steal both in terms of salary and draft capital to obtain him.

Like we did with the quarterbacks, let’s expand this to a Top 10 list as see what we can do with a salary comparison.

Here is how I look at this list. I see ten players who don’t need a great amount of touches or opportunities to make a fantasy impact. At the very least, they are more efficient than the average NFL running back. When you combine salary it’s easy to see that there are six “stand out” players.”  They are…

These are the six running backs that are leading all of my efficiency metrics for the 2021 season, and I look for one of these six to end the year as my running back Value of the Year.

Thank you for reading. Next Wednesday we will talk about wide receivers. Message me on Twitter (@dynastyjerk) and let me know if you have any questions or concerns. I would appreciate it if you followed @Dynasty_Owner on Twitter as well as subscribed to Dynasty Owner on YouTube. Take care everyone and be safe.