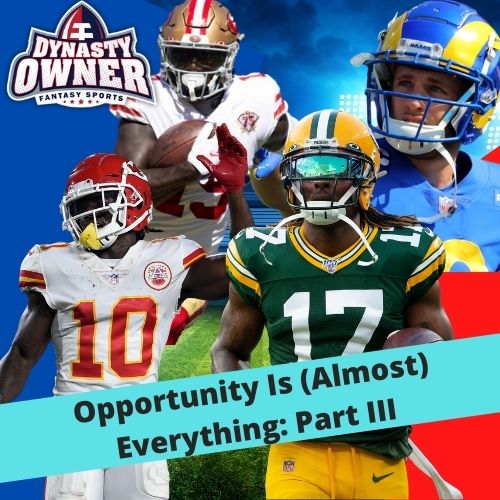 Opportunity Is (Almost) Everything: Part III

Hello all.  I’m Matt TheJerk here with Dynasty Owner. Today I’m going to continue my Opportunity is (Almost) Everything article series. In the past two weeks, I have written about the Top 20 Dynasty Owner quarterbacks and running backs. It is the wide receiver’s turn today. I’ll give you the same spiel that I have given over both of the two previous articles…

Wide receivers will be talked about today. I’ll be presenting the Top 5 of each category listed here:

I would say that there is only one surprise on this list. It’s understandable that Tyreek Hill, Cooper Kupp, Davante Adams and Deebo Samuel are all on this list. Each of them are currently in Top 5 wide receivers in terms of Dynasty Owner fantasy points this year. What’s surprising to me is the fact that D.J. Moore has the third most opportunities of any wide receiver this year, yet he is WR14 on the season.

These are exactly the types of trends I’m looking to find when I crunch these numbers. So, the question is…

“How?  How could Moore have over 100 opportunities with less than 150 Dynasty Owner fantasy points to show for it?”

For my answer I look toward two statistics. First, is the fact that D.J. Moore has a poor catch percentage of 60% this season. So, while he has received 95 targets this season he has only converted 57 of them into receptions. The second fact is that Sam Darnold has an abysmal completion percentage of 59.5 percent. That currently ranks 30th in the NFL. I think most of us know that D.J. Moore is a much better wide receiver than his career stats have shown. The majority of that blame, in my opinion, rests on the ineptness of the quarterbacks he has played with, especially this season. While Darnold started the season hot, he has massively cooled down.

What’s most disappointing is that I don’t see Moore’s outlook getting much better over the rest of the season. His quarterback will be a combination of P.J. Walker and Cam Newton.

Another attempt to find raw efficiency is looking at opportunities per snap. This metric looks at how often a player is utilized when they are on the field.  In order to look forward, let’s look back at last year’s Opp/Snap…

We can see that Davante Adams led all Top 20 wide receivers in opportunities per snap last year with an opportunity 20 percent of the time he was on the field.  Compare that with the 2021 season and you see a very similar trend…

While most of the players have changed, the statistics remain roughly the same. A top tier wide receiver can be expected to receive an opportunity approximately 17-20 percent of the time.

This is the Top 5 wide receivers in terms of FPs/Opp. What’s most interesting to me is the fact that DeAndre Hopkins has only 49 opportunities (all targets). Despite only 49 opportunities, he has 35 receptions and 7 touchdowns. He has been amazingly efficient so far this season. A lot of his Dynasty Owners would say he is having a disappointing season (I don’t think I would disagree), but that disappointment is only on a volume level.

Now, there are two ways to take this info. One could say, “well this is great because when/if Hopkins starts getting more volume then he should return to being a Top 10 wide receiver.” While this could be true, I don’t expect it. I think this second argument is more likely. “What if the volume does not increase much and his touchdown rate cannot be sustained?” We know that touchdowns are one of the most fluky happenings in football. I’m just a little concerned that a lot of Hopkins limited success this season is being overblown because of an unsustainable touchdown rate. This could be especially true if the Cardinals continue to win games and the game script moves away from passing volume.

Like I did with the quarterbacks and running backs, I’m going to expand this FPs/Opp to the Top 10 and see if we can see any salary trends…

What we find is that there is an even split between top level salaries compared to low level salaries. The low salaries show some of the most efficient players in terms of both opportunities and salaries for the 2021 season. Like I said with the other two positions, I expect one of these five players to end the season as my wide receiver Value of the Year (VOTY). The five players are…

For what it’s worth, I don’t really believe Chase as a chance to be the VOTY. While his salary is in the lower tier ($7,547,410), it is not low enough to be considered the ultimate value at the position.

Thank you for reading.  Next week I will wrap up my series when we talk about the tight ends. Message me on Twitter (@dynastyjerk) and let me know if you have any questions or concerns. I would appreciate it if you followed @Dynasty_Owner on Twitter as well as subscribed to Dynasty Owner on YouTube. Take care everyone and be safe.