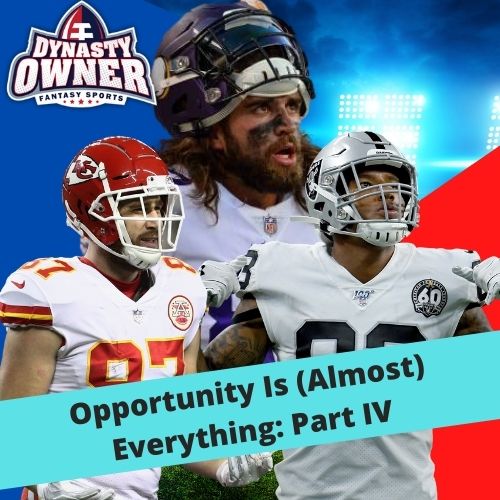 Hello Dynasty Owners. I am Matt TheJerk here with the final installment of my Opportunity Is (Almost) Everything article series. It’s hard to believe that the month of November is nearly over.  With this end, comes the dawn of the fantasy and Dynasty Owner playoffs (only three weeks away). After this article, I will delve into the topic of playoffs. I will present a series of articles that speculate on the players who I think will be league winners for a lot of Dynasty Owner teams this season. But before we get too far ahead, let’s talk about some tight ends and their opportunities. Here is what I have quoted in all four of my “Opportunity” articles this year. It is an excerpt from my articles last year when I really started to experiment with opportunities compared to fantasy points.

Today, I’ll be writing about the tight end position. Due to the fact that tight end is a very scarce and tough position to predict, I am going to only be taking stats from the Top 10 tight ends in Dynasty Owner right now. In addition to that, I will be presenting only the Top 3 for each category. The categories are…

All the stats that I’m including for this article are only through Week 10.  I felt it was more appropriate to include a complete set of 10 weeks considering this is a holiday week.  Regardless, I wouldn’t expect the numbers or rankings to change much even if the Week 11 games were included.  Without further ado, here are the Top 3 for tight end opportunities…

An opportunity for a tight end is defined in the same way that it is for a running back or wide receiver. An opportunity is any target or rushing attempt. As it turns out, tight ends do not have rushing attempts very often, and no one in the Top 10 had one. So, the opportunities you are seeing are all targets.

Travis Kelce leads all tight ends in opportunities, and that should not come as a surprise. What I find interesting is the salary difference between TE1 and TE2 and then also TE2 to TE3. There is definitely a wide range of salary for the top opportunity tight ends. But like I said, Kelce is far and away the tight end with the most volume. He has 18 more targets than the next nearest TE.

**I find it funny that I mentioned not one tight end in the Top 10 had a rushing attempt, and then Kelce goes and has himself a rushing touchdown in Week 11. Those stats are however not included in this article.**

Up next I like to look into Opportunities per Snap. This gives me an idea of what players are getting the most opportunities when they are actually on the field. Of all four major offensive positions, tight end is the one position that has the lowest Opp/Snap. This makes sense as tight ends are called on to block much more than any of the other three major positions. Here are the Top 3 tight ends for Opp/Snap…

There’s a few things I want to mention with this stat.

First, I want to point out how Darren Waller’s opportunities and Opp/Snap may be a little skewed. These are the actual numbers that he has posted over the past 10 weeks.  However, he had 19 opportunities in Week 1. Since then, the most he has totaled in any one game is 11.  Again, I’m not saying these 19 opportunities should be forgotten about, but we have to realize that Waller hasn’t been utilized anywhere close to the way he was used in Week 1. In fact, more than 25 percent of his Dynasty Owner fantasy points came in Week 1.

Second, I want to show that even with a 0.15 Opp/Snap (an opportunity on 15 percent of his snaps), Travis Kelce would rank as the WR6 this year in Dynasty Owner fantasy points if he was labeled as a wide receiver. Let me put that into perspective. If Kelce was a wide receiver, he would currently be 15th in opportunity per snap. Despite this fact, he would be the WR6 on the season. What this tells me is that Kelce is amazingly vital to his team’s success, and that it isn’t limited to receptions and touchdowns. He has a very high number of snaps (610), but he has a relatively low number of opportunities at least compared to top tier wide receivers. Even with this high praise, I was surprised to learn that he is not ranked in the Top 3 for DOFP/Opp.  Based on the info I’ve presented you; do you have any guesses as to who is in the Top 3?

That’s right! Hunter (All I Do Is Score Touchdowns) Henry is the tight end leader for “efficiency” through 10 weeks. The reason for this is precisely due to the nickname I just gave him…he scores touchdowns. Henry already has seven touchdowns in the 2021 season. Since Week 4, he has scored a touchdown in every game except for one. One of those weeks, he had a double touchdown game.

Do you remember back to last week when I talked about how efficient DeAndre Hopkins has been this season? Well, Henry has been even slightly more efficient. Henry has seven touchdowns with only 31 receptions and 42 opportunities. This means that 16.7 percent of the time Henry gets the ball thrown his way, he gets a touchdown. It also means that 22.6 percent of the time he catches the ball, he gets a touchdown. This is truly amazing efficiency, but it’s not something that is totally unprecedented. Jimmy Graham finished the 2020 NFL season with a similar stat line, although not quite as impressive. Graham had 8 touchdowns on only 50 receptions with less than 500 yards.

The other two names have been staples of efficiency over at least the past year and a half. Schultz has to be hyper efficient if he wants any meaningful fantasy production amongst so many mouths to feed in Dallas, and Andrews has been a top tier fantasy producer his entire career with low volume.

There are a few clear cut values when it comes to tight ends. Throughout all of these four articles, my goal was to try and find a better metric for value through efficiency. When I combine salary with fantasy points and DOFP/Opp we see that these are the four tight ends that stand out…

Barring injury, there is almost no chance that Mark Andrews will not be the Value of the Year for tight ends. Andrews is only 23.4 fantasy points behind Kelce. This stat in itself is deceiving because Kelce hasn’t had his bye yet, but Andrews has. Andrews is that close to Kelce, yet his salary is only 6 percent of Kelce’s.