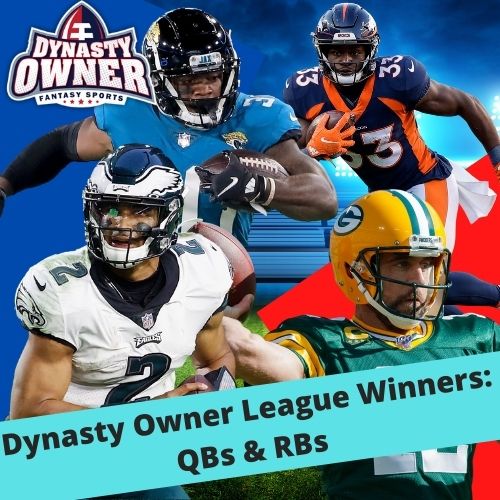 Hello all and welcome to Dynasty Owner. I’m Matt TheJerk.

Today I will be starting a two part article series that discusses some of the players who will give you a massive advantage over your opponent in the Dynasty Owner playoffs. This article will be geared towards each player’s playoff schedule. The Dynasty Owner playoffs will consist of three weeks that run from Week 15 through Week 17. Remember there are 18 weeks this NFL season. In those three weeks, there are several players who have favorable opponents in some or all of those matchups. Today, I will be talking about those fortunate players. I will begin with the quarterbacks and running backs, and next week I will talk about the wide receivers and tight ends. Let’s do it…

All the league winners that I will be writing about are players that should dominate the Dynasty Owner playoffs. Not only are all of these players talented, but they have superb matchups from Week 15 through Week 17. These quarterbacks are no exception.

Neither of the first two matchups should scare you. Over the entire season, both the Ravens and Browns are in the Top 10 for fantasy points given up to quarterbacks. Both of these games should be competitive as well which should provide ample opportunity for Rodgers to succeed.  Finally comes Week 17. Championship Week. Rodgers and the Packers are going up against the Minnesota Vikings. If you remember back to Week 11, Rodgers put up 385 passing yards and four touchdowns as he posted 45.3 Dynasty Owner fantasy points. Rodgers is going to be an absolute smash play all postseason, and I would feel very confident starting him with a Championship in mind. Here are my predictions for Rodgers between Weeks 15 and 17.

If I had to rank all the quarterbacks I would want in this year’s postseason, it would look like this:

Hurts would be the fifth quarterback I would take from Week 15 through Week 17. Yes, he had a very poor Week 12, but that was against an improving Giants’ defense. His final three games look as juicy as any quarterback I have seen this season. He will play the Washington Football Team twice (Week 15 and 17) and he will get a rematch against the New York Giants in Week 16. While the Week 16 rematch may not be the most exciting matchup, I do believe he will have a much better showing than last week. As far as Washington goes though, well…they are giving up the most fantasy points to opposing quarterbacks over the whole season. Hurts should absolutely feast on their defense. His rushing ability always gives a strong floor for his fantasy output. I would not be surprised at all if Hurts finishes as the QB1 between Weeks 15 through Week 17. Here are my predictions for him…

Last year one of my running back league winners was David Montgomery. While I do have him as an honorable mention this year, there are better matchups to be had. Those good matchups start with the Denver Broncos running backs.

Javonte Williams was one of the top rookie running backs I was targeting late in dynasty and re-draft leagues this year. I expected that he wasn’t going to make much of an impact over the first part of the season, but I also anticipated that he would receive more and more opportunities as the season wore on. With those additional opportunities, he would be able to showcase his abilities as one of the most talented backs in his class.

Through the first 12 weeks, Melvin Gordon and Javonte Williams have mostly split the backfield.  Gordon holds the slight edge with 13 more touches. I wish I could say that I predict Williams will run away with the workload, but I just don’t see that being the case. Even with a split workload, Williams would have more than enough opportunity over the Dynasty Owner playoffs to be considered a league winner. Here is who he will face between Week 14 and 17…

Each one of these four teams is in the top third for fantasy points allowed to opposing running backs. Look for success from both Gordon and Williams, but I will take the youth to outscore the veteran.

James Robinson is a player who lost a lot of luster after the Jaguars drafted Travis Etienne in the first round of the 2021 NFL Draft. Most, if not all, of that luster came back following the season ending injury Etienne sustained. With that injury, Robinson once again became the workhorse back and the beneficiary of an extremely favorable Dynasty Owner playoff schedule. Robinson will play the Houston Texans in Week 15, the New York Jets in Week 16 and the improved New England Patriots in Week 17. Let’s break it down…

The Texans currently rank 10th in terms of fantasy points given up to running backs. We just watched them give up over 150 running yards and two rushing touchdowns to the New York Jets.

The Jets are currently giving up the most fantasy points to opposing running backs.

The Patriots are the best opponent Robinson will face in the Dynasty Owner playoffs, but they are still in the bottom half for rushing defense on the season. The bottom line is that Robinson has some rock solid matchups, and his volume should ensure that he is a top tier running back start throughout the duration of the playoffs.

These projections include an anticipated clutch scoring bonus for Robinson in one of these three games.

I’m not going to give a full breakdown on Swift. I just wanted to mention him. He is RB9 on the season despite having only 6 touches on Thanksgiving. There is a realistic chance that he misses at least one game with a shoulder injury he sustained last week. There is also a realistic chance the injury extends longer than just one week. For that reason, I’m not going to give projections for him, but I want to make everyone aware of his fine looking playoff schedule if he remains healthy. Swift will play…

None of these matchups should scare you and the Falcons and Seahawks matchups are very advantageous for running backs.

That’s all I have for you today. Next week I will finish this article series with my second part. I will give some great wide receiver and tight end playoff match-ups. Thank you for reading. Message me on Twitter (@dynastyjerk) and let me know if you have any questions or concerns. I would appreciate it if you followed @Dynasty_Owner on Twitter as well as subscribed to Dynasty Owner on YouTube. Take care everyone and be safe.