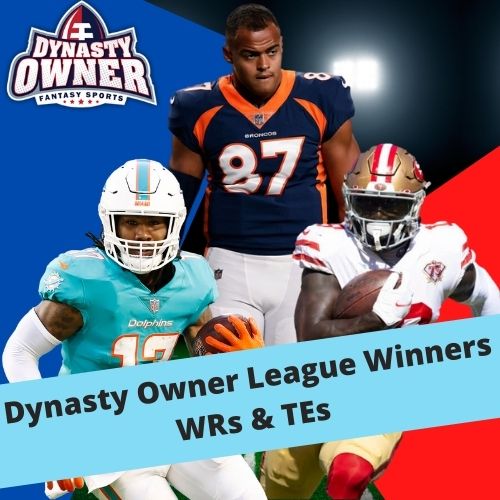 Welcome Dynasty Owners. The time has almost come. After all the off-season debate and work that has gone into building your team, we are one week away from the Dynasty Owner playoffs.  Whether you play in a Love Of The Game league or a $1,200 prize pool league, all of our 2021 journeys will be coming to an end soon. Given that this is the final week of the regular season for Dynasty Owner, I will conclude my regular season articles with the second part of my League Winners. Today, I will write about a couple of wide receivers and tight ends that should (at a minimum) give you an advantage over your opponent. At a maximum, they will help many of you win your leagues. In the first part of this series, I talked about quarterbacks and running backs. Go read that article if you missed it last week. For now, let’s see some pass catching league winners.

All of the statistics I’m using today are through Week 12 only. They will not include Week 13 as I had to write this article prior to the Sunday slate of games.

Deebo has been one of the most successful wide receivers this year in both fantasy and real life football. He has over 1,200 total yards and 10 total touchdowns. Recently, his rushing utility has increased as he had seen 19 rushing attempts between Week 10 and Week 12.

However, his production will no doubt take a downturn up until at least the Dynasty Owner playoffs. He hurt his groin in Week 12 and did not play in Week 13. His situation is questionable going into Week 14, but I do not expect him to play. The good news is that with the timing of his injury, he should be back at relatively full health by Week 15. And boy does he have some solid matchups. Here is who he plays in the Dynasty Owner playoffs…

All this is a long winded way of saying that the WR2 on the season should win many people their leagues this year. Odds are that he brought many of you to the playoffs as well.

Jaylen Waddle is about to have one of the quietest 100 reception and 1,000 yard seasons that I can remember. This is especially special considering the fact that he is a rookie. I think the majority of the silence comes because of Ja’Marr Chase’s success.

(Chase is going to cruise past 1,000 receiving yards and 10 touchdowns. He will probably end up somewhere around 1,300 yards and 13 touchdowns.)

This should not take away from what Waddle has done though. He has over 15.0 Dynasty Owner fantasy points in 7 of his 12 games. He has back to back games of at least eight receptions and one touchdown. Waddle is heating up at exactly the right time. Expect him to continue this fantasy success in the Dynasty Owner playoffs with these match-ups.

All three of these are superb match-ups, and they should bring joy to Dynasty Owners that roster Waddle.

These projections include an anticipated clutch scoring bonus for Waddle in one of these three games.

As I started to write this section of the article, I realized that I was hesitant to use the phrase “League Winner” when it pertains to any tight end not named Travis Kelce or Mark Andrews. Therefore, I probably need to explain myself. When I say that a player like Noah Fant is going to be a league winner, I don’t literally mean that he will single handedly win Dynasty Owners their championship. Rather, I mean that he will give you a decided advantage over your opposition based on the match-ups. At the very least, he should be able to minimize the damage if you do play a Dynasty Owner with Kelce or Andrews. With that, let’s talk about Noah Fant.

But…if Fant remains healthy over the rest of the regular season, he will reward Dynasty Owners who have been patient with him.  Here is his playoff schedule.

All three of these matchup rank in the top half of fantasy points given up to tight ends. The Raiders and Chargers give up the 2nd and 3rd most respectively. Denver should be able to keep all three of these games competitive, and their athletic, pass catching tight end should see an adequate amount of volume.

The final player I want to talk about today has had a disappointing season to say the least. He hasn’t disappointed because of his play. Rather, he has been injured for the majority of the season. Thomas missed seven games in the heart of the season. He returned in Week 12 with a modest 6.1 Dynasty Owner fantasy points. I expect his usage and production to continue to increase as we head into the playoffs.

Strangely enough, the Football Team plays the Cowboys and the Eagles twice still. No one is allowing more fantasy points to tight ends than the Eagles on the season. I look for a floor of 8.0 Dynasty Owner fantasy points for Thomas in each of his final three games.

** Please recall that this article was written on Sunday, prior to Thomas being injured in his game versus Las Vegas and subsequent placement on season ending Injured Reserve on Wednesday. **

As I said earlier in my article, I’m not declaring that any of these players will single handedly win you a championship. What I’m saying is that they will likely give you an advantage over your opponent at that position for the duration of the playoffs.