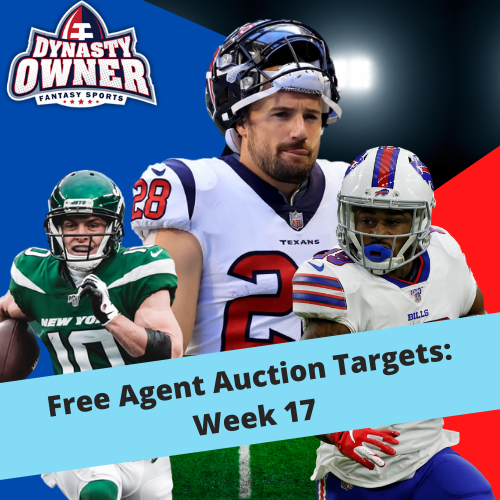 Dynasty Owners, welcome to the last week of Free Agent Auction pickups for the 2021 season. I may be releasing more articles this week if circumstances warrant for all our Dynasty Owners competing for their League Championship or the beloved bonus pick that we offer to the winner of the Loser’s bracket tournament. Week 16 was no different than any other week we have seen this season with many crazy outcomes, injuries, and more players out with Covid. Only the strong, or lucky, whichever term you prefer survive in 2021. As always before we hit our Free Agent Auction targets, we will cover the games of Week 16 during Jay’s weekly recap.

Up first, we have the Thursday night snooze fest between the 49ers and Titans, and I am only calling it a snooze fest because I fell asleep for majority of the game. I am no help on this one I know! In my favorite part of this segment, well call it a sub-segment, Baker Mayfield struggles again. The Browns played a virtual must win game against the Packers and the former Number 1 overall pick, Mayfield had his first career four interception game leaving Browns’ fans with a sour taste in their mouth. The Colts and the Cardinals squared off in another game with big playoff implications with the Colts coming out on top once again. They are one of the hottest teams in football right now. Joe Burrow had a career day throwing for 525 yards and four touchdowns against the Covid ridden Ravens. The Bills and Patriots played in a huge divisional matchup with the Bills taking over first place in the AFC East. Finally, Eli and the rest of the Bills Mafia can celebrate for a week. The Cowboys defense continued to dominate against the Football Team and the offense finally seems to be back on track as well. Finally, we have the Steelers putting a whooping on the Kansas City Chiefs…… and then I stopped dreaming!

Alright Dynasty Owners, we are back with another week of trying to find a diamond in the rough with the Free Agent Auction targets. The free agent articles/videos will be dropping every Tuesday afternoon in advance of when bids process on Wednesday at 5 AM and will consist of the week’s Top 5 free agent adds. I will do my best to keep the players listed at an ownership percentage of 65% or less and make sure all players have contracts of $8,000,000 or less, with most players coming in at under $4,000,000. One last note, in Dynasty Owner you will be credited each week with 25% of your entire Bench’s score making these weekly free agent pick-ups extremely important to help boost your total weekly score.

On to the top targets for the Dynasty Owner playoff finals, aka Week 17:

It’s a bird! It’s a plane! No, it’s Rex Burkhead. The legend himself had a performance we have not seen since his Patriots days but as I said the past couple of weeks, if Burkhead finds the end zone he is 20.0 Dynasty Owner fantasy points waiting to happen. It just so happens he was out to prove me wrong again and put up 30.9 Dynasty Owner fantasy points against the Chargers. In Week 16, Burkhead finished with 22 carries for 149 yards and added 2 touchdowns as well. I think it is safe to say if you picked up Burkhead, he helped you win your week, so I figured why not run it back. The Texans square off against the 49ers, so it will be a tougher matchup but if you have someone out with Covid, Burkhead has the hot hand right now. One last thing to note is the Texans have played significantly better since switching back to Davis Mills at QB.

A few weeks back, the Jaguars fired their head coach, Urban Meyer and it seemed the handcuffs would finally come off their star running back James Robinson. Unfortunately, as soon as things seemed to finally start getting better for James Robinson, it got so much worse. Sunday against the Jets, James Robinson went down with what is being reported as a torn Achilles. As sad as the injury is to such a fun player, it is part of football and is now time to look to Robinson’s replacement, Dare Ogunbowale. After taking over, Ogunbowale had a decent performance finishing with 17 carries for 57 yards and a touchdown. If the Jags are going to commit to the run Ogunbowale is the running back, you want!

The Bills had their game of the year thus far on Sunday in a rematch against their rival New England Patriots. The Bills had several questions to answer coming into the week and answered each with authority. A big reason why the Bills were able to look so good against the Patriots was because of little known receiver Isaiah McKenzie. In Sunday’s game the Bills were without Cole Beasley and Gabriel Davis, and it did not matter as McKenzie had a stat line of 11 catches for 125 yards and a touchdown (along with -1 rushing yard), good enough for 29.4 Dynasty Owner fantasy points. If Davis or Beasley don’t make it back for the week McKenzie becomes a solid flex play.

Here is another free agent pickup from last week who made a solid difference if you played him, Braxton Berrios. Berrios had a decent day through the air showcasing his safe floor of roughly 10.0 Dynasty Owner fantasy points. Luckily for those who played him Berrios can score in creative ways showing his skill set with a touchdown in the return game. In Week 16, Berrios finished the day with 5 catches, 37 receiving yards, and a kick return for a touchdown. He also added 3 rushing yards and 150 return yards for a total of 18.8 Dynasty Owner fantasy points. Be sure to keep an eye on the injury report as Berrios may take a hit if Elijah Moore is able to return.

Thank you for reading and as always good luck on your 2021 Chase for the Ring!