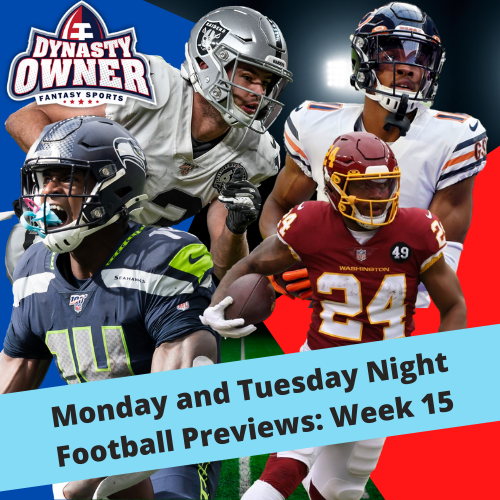 Dynasty Owners! Welcome to the wildest Monday/Tuesday article of the season where we have four games to cover in a short amount of time. Due to the fact there are so many games I will keep this intro short and sweet. The Dynasty Owner playoffs have arrived just in time for a massive Covid outbreak throughout the NFL, which is why we are seeing four games this late in the week. If I were going to describe this season in one word the word would be an easy choice, mayhem. I am honestly at a point with all the injuries, insane outcomes, and a Covid outbreaks that I am officially declaring this season much crazier than 2020. I honestly feel like the 2021 season pulled the hold my beer card when compared to the 2020 season. Enough of the jibber jabber, let’s dive into these four late week games!

I usually start each game off with things that I am watching for and to be honest I am not quite sure with this one. If I knew for sure who was playing, I would be watching to see how Baker performs with the playoffs on the line, but it’s uncertain that he will even play this week and looks as if the Browns will roll with Nick Mullens at the quarterback position. The Browns vs Raiders should be a low scoring contest because of the number of key players out for both teams on the offensive side of the ball. The only real difference between the two teams is the fact the Browns are dealing with Covid, while the Raiders have a few key guys out with injuries. I’m looking at you Darren Waller. Regardless of how things play out, it’s better than having no football at all, I just hope it doesn’t hurt too many of your playoff runs.

Value of the Game – Raiders vs Browns

If you have been an avid reader this season, you will remember back a month or two ago when I selected Hunter Renfrow and thought, he was a somewhat risky pick for Value of the Game. Fast forward in time to the present and Renfrow is an absolute no brainer for the pick. Over the past three weeks, Renfrow has absolutely balled out hitting the century yardage mark in all three outings and adding a touchdown in one of them. Hunter Renfrow for Value of the Game has a nice ring to it if I do say so myself.

This matchup is what I am calling the O.G. Monday Night Football game. In our original Monday night matchup, we have a fun divisional matchup which should feature more than a couple splash plays. The Bears and the Vikings have been questionable to say the least on the defensive side of the ball all season long and it gets no easier for either team in tonight’s matchup. The biggest thing I will be looking for on the Vikings side of the ball is if Justin Jefferson can continue his dominant run that started when Adam Thielen went down with an injury. On the other side of the ball, I will be watching one player as well and that is none other than the former Buckeye Justin Fields. Justin Fields has been red hot in terms of fantasy scoring when he finishes the game over the past month, and I will be looking for more of the same tonight.

Value of the Game – Vikings vs Bears

In our second matchup on this beautiful Monday night, I have Darnell Mooney as my Value of the Game. When Justin Fields has played, Mooney has been his favorite target by a significant margin, and I see no reason that changes against a suspect Vikings defense. I am looking for Mooney to see right around double-digit targets and pulling in around half of them while hitting on at least one big time play at some point. The Fields and Mooney connection is here to stay folks!

Up next, we have our third matchup in what has been the craziest start to a fantasy playoff we have ever seen. In the second divisional matchup of the late week, we have the Seahawks traveling to Hollywood to take on the Rams. In this matchup, I will be watching for a couple of things but none more important than how the Rams respond after a massive win over the Arizona Cardinals last week. The Rams must capitalize on the Cardinals’ massive slip up against the Detroit Lions yesterday. On the other side of the ball, we have the Seahawks who are playing for pride at this point in their disappointing 2021 season. The main thing I will be watching for from the Seahawks is to see if Russell Wilson can get back to playing the way we’ve become accustomed. If that happens to be the case, we should see DK Metcalf get going as well.

Value of the Game – Seahawks vs Rams

As I mentioned earlier in this segment, if Russ gets to cooking, we should see a big day from DK Metcalf. Metcalf has not had a great season by his standards but there is still time to salvage and help Dynasty Owners with him on their rosters to make deep runs in the Dynasty Owner playoffs. Traditionally Metcalf struggles against Jalen Ramsey, but he exploded against him earlier in the season and I am thinking we should see more of the same from the track star at the receiver position.

Finally, we have our fourth matchup on the list featuring our third and final divisional matchup between the Washington Football Team and the Philadelphia Eagles. In this matchup, I will be watching for multiple things but let’s start on the Football Team’s side first. The Football Team will be without its top two quarterbacks in this matchup and will likely have to depend heavily on Antonio Gibson if they want any chance at escaping with a win. Gibson has shown the ability to dominate a game this season, now it’s just a matter of him getting the touches and repeating the performance. I am not expecting much from the passing game without their top two signal callers and a banged-up McLaurin. On the Eagles side of the ball, there are two things that stick out to me, and both have to do with player health. I am curious to see how Jalen Hurts and Miles Sanders play after being banged up in recent weeks. If Hurts and Sanders can stay healthy, they could prove to be a deadly backfield combination.

Value of the Game – Football Team vs Eagles

My fourth Value of the Game pick is none other than Antonio Gibson. A couple weeks back we saw Gibson have the game fantasy managers have been waiting for and I would not be surprised if we see a repeat performance Tuesday, especially in terms of volume. As I mentioned earlier, the Football Team is without its top two quarterbacks, and it would be an absolute travesty if we don’t see more than 20 touches out of Gibson in this situation. Ultimately, Gibson gets the work and the Value of the Game award!

Thank you all for reading and hopefully tonight’s game will be a good one with all these projections coming true. Stay safe and good luck on your 2021 Chase for the Ring!