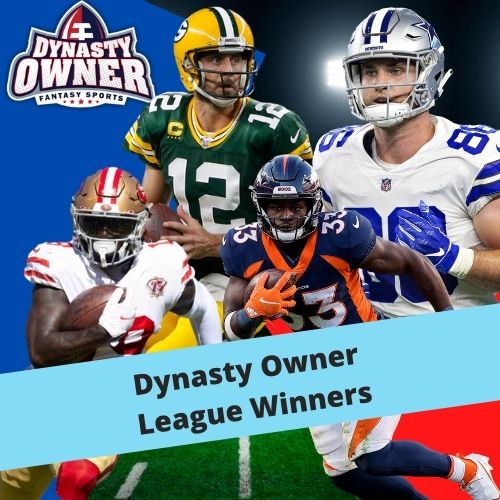 Hello all. Welcome to the off-season. Whatever part of the NFL season you find the most exciting, there is no doubt that the start of the off-season ranks up there for Dynasty Owners. As I mentioned in the last article, this is a fresh start. This is a time for hope as most of us will be drafting new rookies onto our teams. But before we look forward to 2022, today I am going to put a final recap on the 2021 season. I will be bringing you a player from each position who was outstanding in the fantasy playoffs (Weeks 15 – 17). The players I’m about to mention are not the only players that excelled, but they are some of the standouts that I think are worth mentioning.

If you recall back to late November and early December, I penned two articles about who I predicted would be “League Winners”. Due to bad luck and a few poor picks, there weren’t many players on those lists who actually were league winners, but I think my process was sound. Let’s talk about it…

For the quarterback position I chose Aaron Rodgers and Jalen Hurts. Both ended up being fairly respectable picks. Both players averaged over 20 Dynasty Owner fantasy points per game from Week 15 through Week 17 (Rodgers actually averaged 29.2 Dynasty Owner fantasy points per game). Even with these solid performances, Joe Burrow is the man I have to talk about.

What Burrow did in Weeks 16 and 17 was literally record breaking. He was only 8 yards shy of 1,000 yards in those two games. On top of that, he posted 8 touchdowns. He averaged 53.3 fantasy points, and he was far and away the most impressive quarterback in the semifinal and final. On a personal note, Burrow single handedly beat me in one of my Dynasty Owner leagues. That is to say that he and Ja’Marr Chase single handedly beat me. My opponent had the Burrow/Chase stack, and it made for a quick loss on my end.

I’m saying this without even mentioning salary. His $9,047,534 puts him as one of the cheaper quarterbacks in Dynasty Owner as well. Truly amazing stuff from the QB6 on the season as a whole.

I was really rooting for both of the running backs that I picked as league winners. Unfortunately, it wasn’t meant to be for either of them. Javonte Williams and James Robinson both had favorable matchups coming into the home stretch. Williams actually saw a decent amount of volume, at least about as much as I predicted he would, but he was unable to be productive with it. Against the Bengals, Raiders and Chargers he averaged only 3.2 yards per carry with a single touchdown. This is far from the impressive prediction I had for him…

Overall, Williams impressed me quite a bit this season. Let’s hope the relatively disappointing end to his season does not dissuade Dynasty Owners from obtaining him next year especially with the uncertainty involving Melvin Gordon.

The second running back has a much more unpleasant end to his season. James Robinson had a fantastic game in Week 15 against Houston. That matchup allowed him to produce 17.8 Dynasty Owner fantasy points on 21 touches. Unfortunately, early in Week 16, Robinson suffered a partial tear to his left Achilles tendon. This obviously ended his season, but more disappointing is what this may mean for his career path. Hopefully he earns himself another chance (likely on a new team), but we have all seen how difficult it is to come back 100 percent from this type of injury.

Penny’s future is still uncertain as his rookie contract will be expiring and the Seahawks declined to pick up a fifth year option.

The wide receiver that I’m picking as my Dynasty Owner League Winner is Deebo Samuel. Yes, I know that there are two WRs who statistically performed better than Deebo in the final three weeks (Ja’Marr Chase and Davante Adams), but I don’t care. Samuel has been one of the most consistent and surprising breakouts this season, and I want to talk about him some more.

My two picks for tight end league winners seemed like solid picks when I wrote them. The two players were Noah Fant and Logan Thomas. As most of you know, Thomas went on season ending IR shortly after my tight end article was released. That was an unfortunate blow to him as he looked primed to make a playoff impact.

Yes, Mark Andrews ranks on the very top of the list for fantasy points from Week 15-17, but I want to talk about another player today. His name is Dalton Schultz.

Schultz, quietly, had a sensational end to his season. He finished with 20.7, 22.2 and 11.4 Dynasty Owner fantasy points. He has likely earned himself a top tight end salary for next season. This new contract will likely be hard for Dynasty Owners to stomach especially since he is a tight end. Regardless, celebrate his performance now and worry about his contract in the near future.